A new novel by Paul Griffiths

What are we going to do now?

I don’t know what to do now.

What do you mean, What are we going to do now?

What do you mean?

I just don’t know what to do.

What’s the problem, then?

It’s fallen apart on me.

There’s a lot I don’t like, beginning with that dirty great rock having shifted on its own-i-o.

He shouldn’t have gone.

No, he shouldn’t have gone.

It’s about the tomb guardians?

Those pictures of the tomb guardians?

The body’s been placed in some kind of cave, which has been sealed with a stone, and they’re there –

And they’re there to make sure nothing happens. But it does. Total failure. I know the feeling.

How many of them are there?

It’s not going to help to talk.

We’re talking. How many of them are there?

It was better when there were the four of us.

Four was a good number.

So now we’re three. What difference does it make?

We knew where we were, then.

And now we don’t?

And they were standing guard, but –

Why did he have to go?

He’d’ve had his reasons.

He may have known.

Yes, he may have known.

Did he say anything to either of you? Before he left?

We were asleep. Remember?

He must’ve known. That’s why he went. Obvious.

But did he say anything? Earlier on?

I saw it coming.

I did. I saw it coming. There was something about him.

All four. But separately. Each on his own. Each of them asleep. Be quiet.

You’d have expected them to take it in turns, wouldn’t you? Two on, two off. After all, these are Roman legionaries. Professionals.

Never mind all that. What are we going to do now?

Maybe none of them wanted to miss it.

And so they all ended up missing it.

Exactly. Now can we talk about something else?

He may have known.

I want to know about these tomb guardians.

I told you, it’s fallen apart.

That’s it: he would’ve known.

Get it up on your laptop.

You’ve involved me. You didn’t have to. Get it up on your laptop and read the thing.

I start by introducing the topic –

“My subject this evening is a set of three paintings by the sixteenth-century master Bernhard Strigel, housed in the Munich Alte Pinakothek – three paintings, each showing an armed man asleep on the ground. Three paintings, three portraits. Of course, the artist painted not three but four. The other one became separated at some point from the Munich trio.”

What I’m wondering is: Where is he now? Where did he go to? And when did he go? And why ever did he think he had to go – and leave us?

No. It’s somewhere else. I come to that.

You know, I think you’re right. I think he must’ve known.

That’s why he went. He knew, you see.

You mean he knew what was going to happen?

You think he was in on it? He was one of them?

He goes in case…

“They are asleep. The artist depicts them fully at their ease, while at the same time prompting in us disquiet, unease. We know what they are sleeping through, what they are not witnessing, even though this is their sole task, their sole purpose. We know what they are missing, which might very possibly be happening right at this moment, right here and now, in another part of the scene.” That’s the thing. Here we have these three, each of them alone, in these three pieces of a giant jigsaw, and we know there’s one piece missing, the fourth of the group, and we know there’s also a lot else missing. It’s what these three, four men are missing. And what’s missing in terms of the number of pictures. What, therefore, we are missing.

In case he gets himself killed in the fracas. In the brouhaha. But there wasn’t any…of that.
Only because we were asleep! Look: Something happened. We know that. You reckon that stone moved by itself? Something happened. We missed it. Somebody came. More than one person, must’ve been, to shift that thing.
We were supposed to stop that from happening. That’s exactly what we were supposed to stop from happening.
If we’d been awake, we’d have stopped it. We’d have stopped them. We’d probably have gone for them when we first heard them approaching. A whisper. The crack of a twig. We get up. We draw our weapons. We go in their direction. Silent, like. Come on, we can do this. We’re professionals. Not a sound do we make. Not a sound. So we can catch them all unawares as they come out of the wood there. But of course they’re armed, too. There’s a fight. Very likely someone gets himself killed. Now, he’s just woken up, and he’s thinking all this, and the three of us are still asleep. They’re going to come, he thinks. There’ll be a fight. Someone’ll get himself killed. Could be him, he thinks. We’re all dead to the world. Here’s his chance. So off he goes. Before it happens. Before there’s any danger of it happening.

Now you say all that, I don’t see it.

You don’t see it?

No. You want to know why? I know him. He’s just not like that. He’s not one of them. He’s a really great guy.

You have a beginning. You know that.

A copy of the paperback with foil debossed cover and four colour plates. 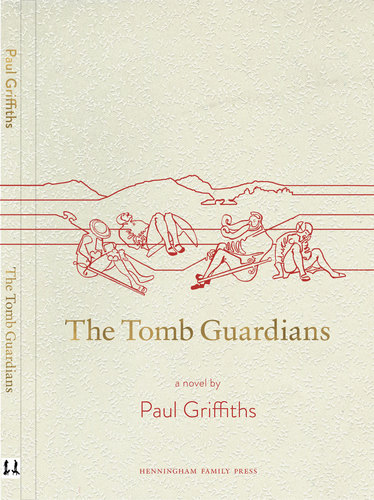 1 x Printed proof of the paperback book before the main printing (so you can read the novel before general release in June 2021).

NB: hand binding of copies will take place after the general release of the paperback in June 2021. 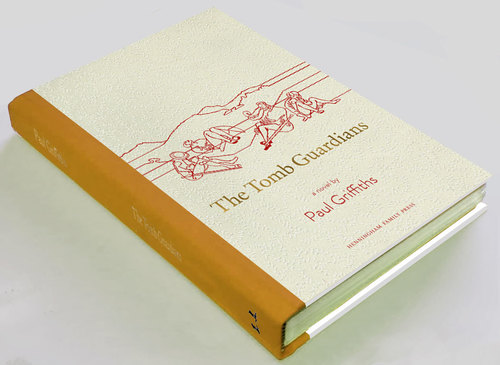