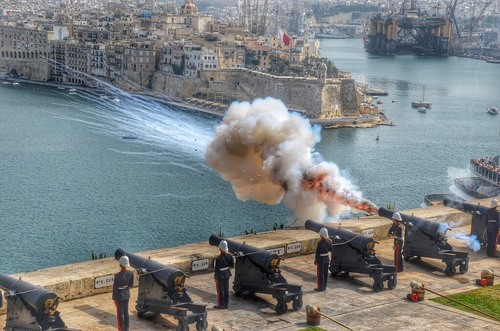 Firstly, I’m thrilled to announce two exciting book signing dates which are coming up in Malta! Malta: the place I still call home and which my Maltese English-speaking friends refer to as ‘the rock’. A rock steeped in the aeons of history and I just can’t wait to get there as I need a holiday and it’s been too long since I last visited.

I should also add that Malta has been such a rock with all its support and enthusiasm for ‘The Sheriff’s Catch’ and I can’t wait to meet all my relatives, friends, patrons, pigeons et al when I’m back.

Most of you might know that Malta’s capital city of Valletta - named after the legendary European hero Jean Parisot de la Valette - is this year’s European Capital of Culture. So what better place to kick off the book signings than Agenda Bookshop’s Waterfront store? Here’s the venue, date and time:

We’ll have a couple of fine guest speakers and I'll also talk a bit about Sheriff and getting publihsed and also take guests’ questions before signing a few copies which will be available for sale. My old mates from sixth form / high school have also told me that they’ve got a few post-function drinks planned along the waterfront, which should also be great fun. 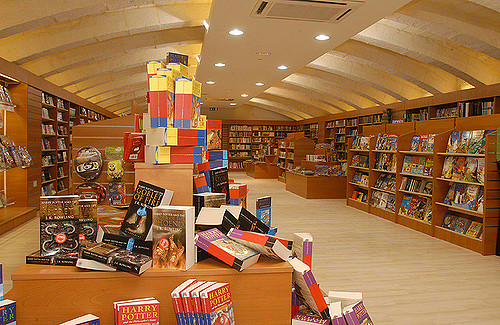 For those of you who can’t make that date and time, never fear! I’ll be at Merlin Library’s wonderful Bisazza Street store the following day in Sliema, with pen at the ready to sign a few more copies of Sheriff which will also be on sale in the store. Here’s the details: 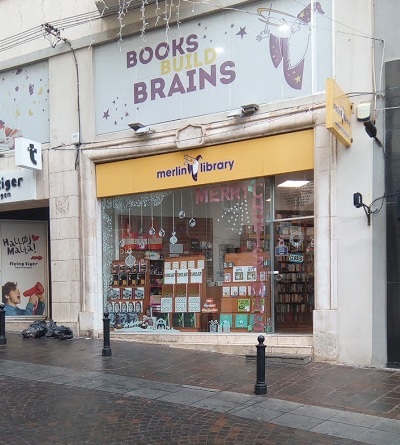 I’d like to express a MASSIVE THANKS to both Agenda Bookshop and Merlin Library who have both been a huge support with the stocking and promotion of my debut novel. A shout also goes to the guys at BDL Bookstore who have also pitched in to support Sheriff .

And just on this: I should also add that Agenda Bookshop contacted me last week to inform me that I’ve made their bestseller list - WOW! Barely half a year since the publication of my first novel and I’ve made a bestseller list.  Coupled with a recent update from Unbound that the novel is selling 35-50 ebooks a week, online booksellers like Amazon constantly declaring that they’re out of stock, as well as a steady run at Waterstones in the UK & Ireland and Abbeys Bookshop in Sydney, and I’m left pinching myself. 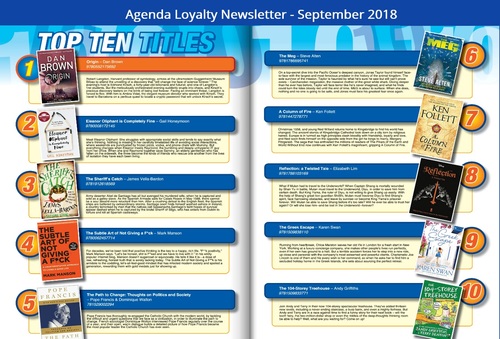 And if you thought that was great news, then what about the recent notification by the University of Malta Library that The Sheriff’s Catch was named ‘book of the month’ for September 2018?!

Holy cow folks, this has been one mad week. I’m not sure any writer does what they do for the money, but the appreciation and interest to date have been very gratifying.

And speaking of Malta: I should also add that the lovely Trudy Kerr has invited me back onto ‘The Long Drive Home’ on XFM on Monday 1 October, where we’ll be talking about the Sheriff with that force of nature, the hugely talented actor and old partner in crime (I’m talking risque’ toga parties in a Strasbourg hotel room) Chris Dingli! Tune in for a great discussion and a few laughs.

While speaking of home I’d also like to thank everyone who attended my Birthday Book Signing Function at The Oaks Hotel in Sydney on Friday 29 June. It was certainly a night to remember, what with re-enactment group Danelaw helping to provide a truly historical atmosphere and treating us to a side-splitting clash of steel to boot! The function was just brilliant, even though my hand nearly fell off after signing 100+ copies of Sheriff! It was great to catch up with so many friends old and new who I’ve met during my eleven years down under. Here’s the fantastic photos of the event on my Facebook novelist page if you haven’t yet seen them, courtesy of talented photographer Jill Brand. 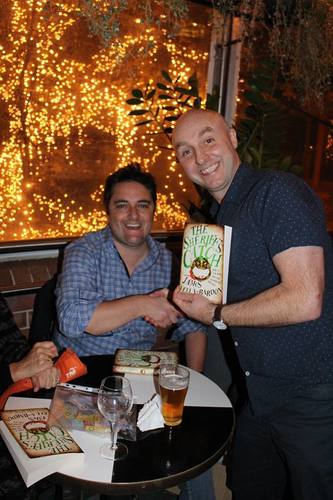 After Malta I’ll be off to meet our dear rellys and friends in good old Glasgow, who include our friend Keren McKean who interestingly was the first manager (and still involved with the management) of supergroup Snow Patrol. Keren kindly added me to Snow Patrol’s guest list when the band were recently passing through Sydney, and also encouraged me to drop off a copy of Sheriff for Gary Lightbody who’s apparently an avid bookworm. I should add that I’ve watched Dylan, Aerosmith, U2, Oasis, Rod Stewart, AC/DC, Live, Pearl Jam and The Darkness among many other great acts, but Snow Patrol were hands down the best I’ve watched to ate. You should check out their latest album Wildness which was also released this year, and catch them live if you can. Here’s a few videos from my author Instagram account, of a show that was very inspiring to me, especially when I think of how long and hard Snow Patrol fought until they made their breakthrough.

You can also follow my Instagram account to receive updates about Sheriff. On that note, I’m also excited to share that popular Insta bookblogger Kieran Higgins is presently reading Sheriff and I look forward to his review:

After Glasgow it’ll be off to Ireland for a couple of days where amongst others I hope to meet brilliant academic and writer Jim O’Neill in Belfast who’s recently written a fantastic non-fiction book about the nine years’ war called “The Nine Years War, 1593-1603: O'Neill, Mountjoy and the Military Revolution”. I recommend it to all European history enthusiasts: here, to check out my review of it.

I also look forward to meeting the wonderful Bookline radio host Teresa Quinn in Dublin. Teresa is another fan of The Sheriff’s Catch who interviewed me on Irish radio station Liffey Sound FM on Sunday 1 July, just a couple of days after the Sydney book launch! Here’s the interview link for those of you who missed it.

I must say that there’s so much going on with Sheriff that my head’s often left spinning whenever I try to write these posts. But I should also mention a great open mic event which I attended at the Chatswood Library yesterday evening, in which I got to meet many talented authors and enthusiastic readers. My reading of The Sheriff’s Catch met with a wholehearted round of applause and some great questions, and we also sold a few copies. And today I was just delighted when Chatswood Library invited me back to theirs to give a talk and Q&A about The Sheriff’s Catch and my road to publishing in the new year. 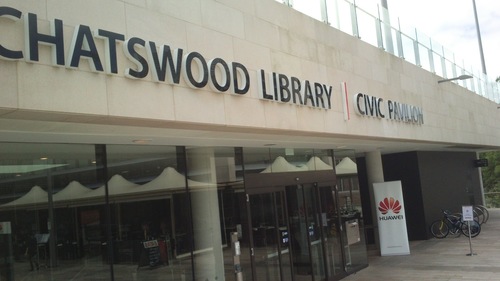 Of course, I’m absolutely pumped about this and will update everyone on the date of this exciting event in coming months. It’s just great to be able to meet Australian writers and readers and I’m always up for this sort of event and look forward to doing more local promo in the close future.

Oh, did I also mention that I had a few great interviews with a few US-based writers of late? Here they are:

In conclusion, thanks to those readers that posted a review about The Sheriff’s Catch on Amazon and Goodreads to date. The Amazon.co.uk reviews are particularly a shot in the vein since we’re slowly but surely closing in on the supposed golden number of 20-25 reviews which will get Amazon to start working some free promo magic of its own on The Sheriff’s Catch! Please guys: do not be bashful and post a review there if you can! It’s always great to read your thoughts about Sheriff and there’s no better endorsement of one’s work than reader reviews which have to date been brilliant.

Did someone mention the Sheriff’s sequel, A Rebel North? More on that in the next post…

Look forward to catching up with most of you in person in the close future. Go Santiago! 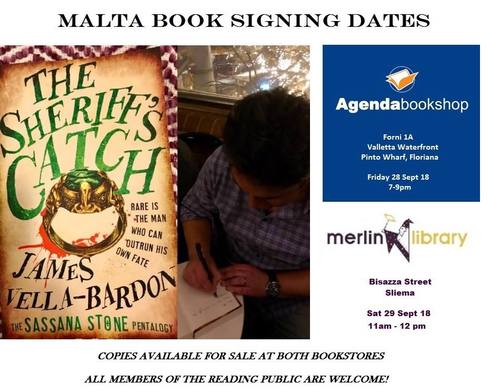 PS some interesting lesser-known historical points about the remarkable island of Malta, which might be of interest: 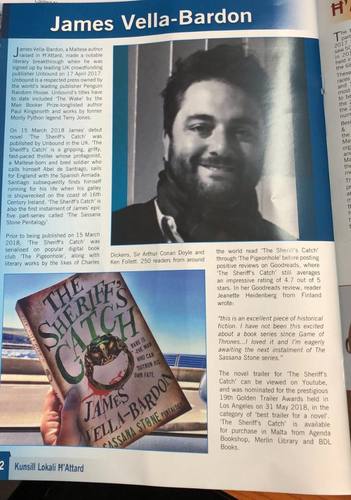