Every month we catch up with a Maltese national who lives and works abroad. This month, we chatted to debut novelist James Vella-Bardon.

2018 was a breakthrough year for Maltese novelist James Vella-Bardon when his debut novel ‘The Sheriff’s Catch’ was released by UK publisher Unbound on 15 March 2018. Its been a rollercoaster ride since. After seeing his YouTube book trailer being nominated at a red-carpet Hollywood event in LA, he was also invited to meet the President of Malta when he became the first Maltese national to break Malta’s bestseller list in English fiction, climbing to third place just behind the likes of Ken Follett and Dan Brown.

Q - Hi James, so tell us a bit about yourself and your life and work.

I’m a writer who supports himself by working as a risk manager in Sydney, Australia. I moved down under for work in 2007 after a brief stint spent working with the EU in Brussels. For most of the last decade I’ve burned the midnight oil practically every day, working on a five-novel series called ‘The Sassana Stone Pentalogy’. My debut novel ‘The Sheriff’s Catch’ is the first instalment and was published in the UK on 15 March 2018.

Q - A congratulations are in order about the novel. Can you tell us a little about it?

Thank you. My debut novel ‘The Sheriff’s Catch’ is a rollicking, red-blooded historical thriller. Readers have called it a fusion of George RR Martin and Bernard Cornwell in style, with a dash of Perez-Reverte’s black humour. I hope it’s what Sir Arthur Conan Doyle would have called ‘a rattling good yarn’. The protagonist is of Maltese origin, a plucky, never-say-die sniper named Abel de Santiago. ‘Santi’ suffers a grave injustice when he is illegally sold as a galley slave to one of the captains of the Spanish Armada. Following his galley’s shipwreck Santi finds himself a castaway in Tudor Ireland, fleeing the mounted troopers of a brutal sheriff who wants him tortured and killed.

Q - How has the novel been perceived abroad and in Malta?

To date thousands of copies have been sold worldwide and the feedback has been excellent both from Malta and overseas. The Sheriff’s Catch still scores 4.7 out of 5 stars on Goodreads. I think my London-based publisher still likes it, since they’ve submitted it for four literary awards in the US and the UK. Last month it picked up a cover design award in the US and its YouTube trailer was nominated for the 19th Golden Trailer Awards in Los Angeles, being screened along with trailers for Black Panther and Wonder Woman. In September 2018 I became the first Maltese author to break Agenda Bookshop’s bestseller list in English fiction. It’s an amazing feeling, unreal. READ MORE HERE... 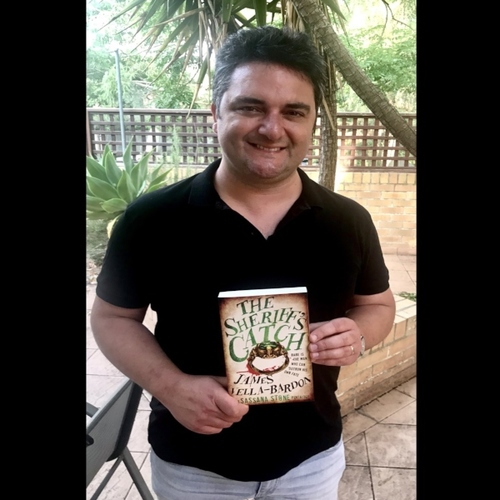