From one of the world’s leading experts on poetry, a collection of poems

The Pleasures of Revision

I remember writing my one-man play about Shakespeare for the actor Simon Callow: I banged out the first draft in two weeks flat and he said it was perfect. But we then spent two years rewriting it eighteen times over. It wasn't perfect: a first draft never is. On a smaller scale, something similar happens with poems. Writing my biography of Ted Hughes, I'd often find ten different manuscripts versions of the same poem. In one case, 150 pages of drafts for a poem of just 3 pages.

For me, the usual pattern with poems is this. Stage 1: it just comes to you. It really is like the descent of the Muse or what William Wordsworth called "the spontaneous overflow of powerful feelings." A memory, an image, an emotion: something wells up, often at an unexpected time, and you write it down and it's a poem. For a moment, you think: it's perfect. Job done. But it never is. You sleep on it and look again. Stage 2: sometimes this is easy. You just scrunch it up and bin it. This one wasn't a big enough, or felt enough, thought or feeling to be a decent poem. Never mind, the hit rate doesn't have to be high. But when you see that there is the kernel of a poem, the process gets interesting. You find that some of the lines work just fine. Others need to be cut. Less is often more. Additions are sometimes needed to clarify the line of argument or flesh out the mood or scene. And then there will be some lines where the rhythm is wrong, and needs surgery. This or that image is flat, another is a cliché. At this point, the poem comes close to its final form. But then there is Stage 3: the tinkering. Over time, you return to the poem again and again, tweaking a word here, a rhythm there. You become obsessed with improving the clunky lines. Sometimes you end up satisfied.

Occasionally, there's an interesting Stage between 2 and 3. "Arboreal Cousin", one of the poems in The Shepherd's Hut, got to Stage 2, but something was wrong. Then it clicked: it had been written in blank verse, but something about the subject-matter was demanding rhyme. Would it feel forced to convert it? No harm in trying. One could always revert to blank verse if the rhymes sounded crude. I think it did work. I'm pleased (at least for now) with the outcome. There aren't many rhyming poems in The Shepherd's Hut, but I'm glad that the pleasurable process of revision created this one. Here's a photo of the typescript at the moment when the conversion suddenly revealed itself as a possibility. 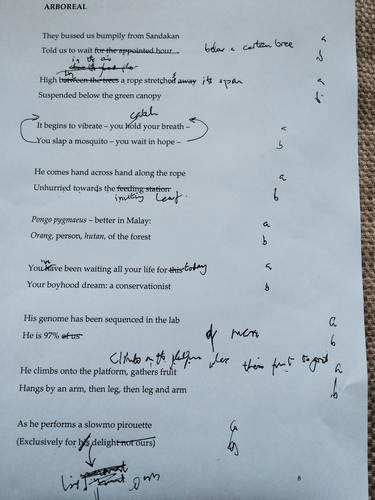 Reading your 'Stage 1' above reminds me of the quote just read in a really delightful book (reference below) that really captured for me the miracle of the art of fine word use. The author says how one can read a line and feel ' " yes, that is how it is, but I've never heard it expressed so eloquently and concisely" '. Perfect!!