From one of the world’s leading experts on poetry, a collection of poems

"Why don't you ask Emma Bridgewater to illustrate it?"

That was the inspired question of my teenage son, Tom, who has become a bit of a poetry connoisseur. He held up the selected poems of Stevie Smith that he was reading, to show me an example of how simple little drawings can elegantly complement a volume of poems. Imagery is vital to poetry, so it is not surprising that there is a long and distinguished tradition of illustration. William Blake, of course, did his own.

So I asked Emma, who is surely Britain's most distinguished and creative ceramic designer. Once I told her about the work of ReLit and how the Foundation will receive the author's 50% share of the profits - that innovative publishing model operated by Unbound - she was delighted to contribute. I gave her a typescript and, to get her thinking, a list of a selection of the images in the poems:

A chick cupped in a young woman’s hands

A goat (on a Greek hillside)

The eaves of an English country church or the bending beam of a timbered cottage.

Some she chose and some she didn't. Other illustrations are inspired by her careful reading of the poems. But we both felt that it shouldn't be one image for each poem. Some of poems are shaped less by imagery and more by ideas or narrative. What we will have instead is a selection of illustrations - in the same kind of style as Emma's famous spongeware pottery designs - scattered through the book.

They will be stepping stones, staging points, little oases for rest in the course of a volume that is itself intended as a place of rest and calm in our chaotic, stressful world.

Thank you, Emma. Especially for your vision of the title poem. 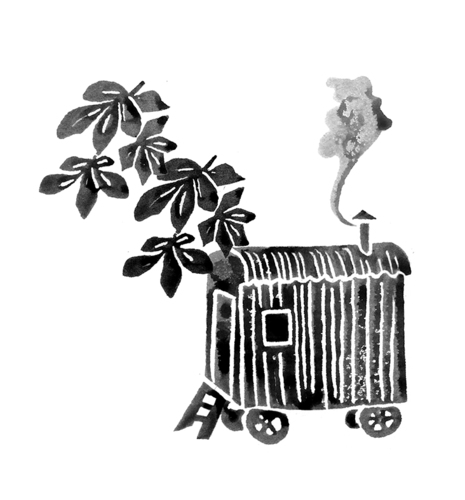