Terrorism with a social conscience, a debut novel

The Invention of Much Needed Stationery

Apologies for my recent absence. It may appear that I was all touchy-feely with my shed until I was funded, and then I abandoned you. But let’s face it: it’s damn hot outside, and it’s no weather to be sat in a shed.

In part this has been because I am soon to be married. Yes, I just played that card. Part of the joy/ relief of being fully funded is that I don’t have to have a laptop at the entrance to my wedding demanding guests either prove receipt of book purchase, or to log themselves online for a signed copy before witnessing the nuptials.

A common conversation I’ve had in the last couple of weeks:

“So Sam, congratulations on this wedding stuff and all. But when is my book going to arrive?”

A fine question. Sitting down with the Unbound team last week, we sketched out the timeline until you get your beautiful limited edition hardbacks through the post. (I’m trying to think of an adjective for the kindle version, and the best I came up with was digital.)

Let me be straight with you. We estimate that the trade editions will be in bookshops around May/ June, with the hope that you, my benefactors, will receive your copies before then. This does seem like a considerable wait; some friends have raised suspicions that the book is yet to be finished.

“You could write a book in that period of time.”

Feel free to give it a try. But not this book. I can vouch for that.

The manuscript is indeed finished, but to make sure you get the very best book we can make, we have rounds of editing, copy-editing, and proofing, while designing the artwork that will grace the cover. There is also a rather selfish reason: the book market is a rather heartless beast. Thousands of books vie for attention, and we have to release The Serendipity Foundation at a time that gives it the best chance to fly- and late spring/ early summer is the consensus for a debut novel. The joy of Unbound is that by pledging, you become part of a process that you never witness if you buy an already published book. Unfortunately, that also means a little wait. So please accept my apologies. Trust me, I am as eager as you are to get my hands on it.

It does, however, mean I have a little more time to turn my attention to making the extra pledge rewards as special as possible. I did not expect such demand for personalised haikus. I maybe should have made it clear: I am a writer who then dabbled in a bit of light haiku, not the other way round. I am no… (*Fill in your favourite haiku poet’s name here*).

One of the challenges with writing the 67 and counting personalized Prime Minister’s Question Time haikus is to keep each haiku a distinct idea- seventeen syllable closure, if you will. So each haiku demands a fresh page. But I am also a hypocritical environmentalist who hates waste, and those barren 12 lines underneath each haiku gnawed at my conscience. A couple of times I have been struck by genius, thinking of new products the world needed, only to be found they had already been thought of[1]. But now, I have genuinely cracked this capitalism thing. I give you the haiku notepad.

The brilliance of the product is that you take the work of a non-inspired stationery manufacturer, cut their product in two, and are left with not only the haiku notepad, but it’s sister product for the wordier (and for those with a more sixteenth century disposition) sonnet notepad. 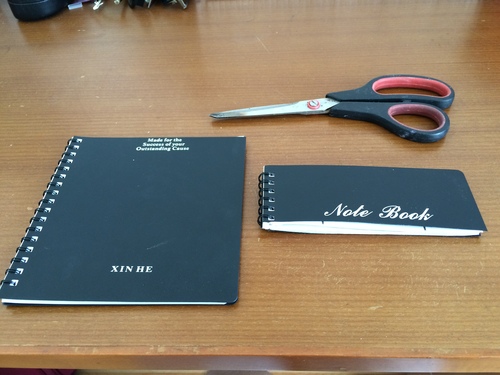 And all of a sudden, the seeds of The Serendipity Foundation’s sequel has been sown…

Anyway, we (and I use the collective we intentionally) are on 129% funding, which is amazing. It is still open for funding, and now will be the only time to get your name in the book and receive the limited edition hardbacks (which if you haven’t been involved with Unbound before, are beautiful). It is also the only time you can ever have a whole page of my haiku notepad to yourself: it is easy to upgrade your pledge if you do so desire! Sonnet PMQs will be on demand.

[1] I had the idea one Christmas to combine Sudoku with a Rubix Cube, with the brilliant (but obvious) name of SudoCube. The joy was short lived- someone had already made it, and called it… wait for it… the Sudoku Cube.

SudoCube is so much a better name.
Love the sonnet notepad. Better (C) that.

A moment of inspired genius Sam. You have given me the confidence to embrace this approach with my own idea of the 'short-sleeve suit'. Attending a wedding in Sri Lanka, in July, will be painful experience in a traditional three-piece. But no longer. Equal parts formal and comfortable, my shins and forearms will now be free to bask in the Indian Ocean sea breeze as you commit to your vows. The iPhone mini I have planned is on hold until I can find something more robust than scissors.

Hi! I know nothing about haiku and not much more about poetry forms, but despite that I enjoyed THE SERENDIPITY FOUNDATION hardback and thought its concept was inspired. What a pity that some Unbound authors do not offer a hardback version of their book. Congratulations on your forthcoming nuptials and may you both be blessed with a long and happy marriage. Val Kemp