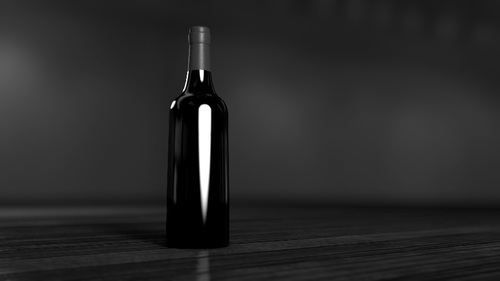 I have a bottle of wine. I made it myself in my bathtub, through nefarious means, but I insist I have a wine-smith's license and the whole business is fully above-board. Cajoled, a local merchant buys the wine for £34.99, including VAT. My wine is gone. I've swapped it for money. The gods of capitalism have been appeased and all is as it should be. But wait - the merchant cackles, and with a flourish whips the rubber mask from his face, revealing wiry facial hair and wild, bloodshot eyes.

It's Redbeard, wine-swilling scourge of the local vineyards! He slurs some words of immense power and creates a perfect copy of my bathtub juice, and it has a handy screw-top instead of a cork. I'm not sure how he's done it. It's hard enough learning how to make wine without learning how to duplicate it through magic, and I've never really gone in for magic anyway. This means I'm still on the back foot when Redbeard duplicates it again. And again.

The bottle is now spinning in the air, vomiting forth shards of glass and gouts of Shiraz, which stream into the air and distribute themselves over the horizon in all directions. Redbeard has bought my wine and dropped a small fortune on Virtual Private Vineyard hosting, and everyone can now get blinded by my home-brewed nightmare fluid free of charge. I'm confused, angry, and slightly afraid of the snoring pirate wizard lying on top of my dresser.

Ebook piracy doesn't exist on the same scale as music, film, wine, or game piracy. It doesn't change how the industry works, or provoke major action from the big players in the business. It's also not very well understood. Different forms of media have different patterns of piracy and warrant different responses, and it's particularly difficult for a struggling industry to invest in getting good metrics on it when there isn't even money in publishing to pay authors a living wage (apparently). The result is an awful lot of arguments being thrown around online with little or no relevant data to back them up, and a growing resentment amongst authors who feel like their livelihoods are under (yet another) threat.

A book, largely, is made by one person (ignore for a moment the vital work done by editors, designers, typesetters and weary partners) and that person is a visible handle attached to it. Thanks both to Twitter and the Unfortunate Necessity of Twitter, that person is often accessible. Exposed. Bad reviews hit one person. Angry readers target the one person. It's hard for authors not to feel like it's them against the world, with minimal support from the industry.

Piracy could have no effect on sales whatsoever, but the author won't have a clue, since authors often aren't given any sales data. Authors are often advised to set up an alert that tells them whenever one of their books shows up on a torrent site. The end result is a weary, underpaid author, often riddled with neuroses to start with, working twenty-to-forty hours a week on publicity to painstakingly sell books to individual readers, who can now magically receive a push notification every couple of days saying that someone's trying to give their book away for free.

Regardless of what ideas you might have about piracy and the practical effect it has on sales, you can imagine the sting.

The one subject that always comes up in these arguments is textbooks. They're overpriced, and students can't afford the ones they need for their courses. Surely piracy is justifiable then? Even if the educational publishers are already resorting to desperate, brutal business tactics to stay afloat? The students are living off ramen packets and getting up at 5am to grab one of the two copies in the underfunded arts department library. If they oversleep, maybe thanks to the lack of funding for pastoral care and mental health support, they'll be stuck. The authors aren't doing much better - no advances, dire royalties and vanishing speaker fees - educational writers are some of the most important and most poorly treated in the business, and many of them are in serious financial trouble. Is piracy okay? The students are getting into crippling debt for the rest of their lives. They can't buy clothes. They're only there because they were told they'd never get a job otherwise. Is piracy okay?

I've seen these arguments play out over and over, never resolved. I don't know if there's a clear answer. The data just isn't there yet - but I do know that nothing happens in a vacuum. Libraries are closing because certain people chose to close them, and funding for universities has been slashed by the same people. Cuts to the arts have complex cause-and-effect chains that cause creative industries to shrink, and the creators at the end of those chains are the ones hit hardest. Sneaky decisions get hidden in fifty-page government reports, then a year later your textbooks cost £90 each and there aren't any grants to help pay for them.

Piracy's a quick fix for some people, and a symptom for others. Small-scale piracy wouldn't be a problem if authors were paid properly, and authors wouldn't be paid so poorly if publishing had better support and protections from government. Library funding, improved literacy, sensible EU dealings and aggressive regulation of companies like Amazon are all practical ways to improve this. Writers and readers bludgeoning each other in the streets is no way to solve the problem.

Authors: if you're angry, that's warranted - it's necessary, in my opinion - but your anger is best directed at the people who can effect change. That's not students who've been stiffed out of an education they can afford (they're on your side), and it's not freeloading cyber-hippies who want their latest fantasy fix without dropping a fiver on it (they're a symptom). It's government ministers who have the power to push for a fairer deal for everyone.

Long story short, yell at your MP about publishing. Tweet it from the rooftops, or from a nice café with free wifi. Readers: buy books from publishers who've found exciting new models to sell books and still pay their authors fairly (like these here Unbound people). Support your local bookshop and make sure your libraries stay open. Avoid big multinationals like Amazon where you can. Remember libraries let you read for free, and Public Lending Right pays authors when you borrow their books.

Sorry for the opinionated, ill-informed blog post. You might disagree with me on this, and that's great! Leave a comment below and point out all my mistakes - it's good for SEO and you'll be supporting an author scrabbling for pledges for his book. Win-win!

I cannot disagree with anything you say. But should protections be plural...?

Ha! I wondered about that - I meant 'protections put in place by government', rather than 'protection from government', even if sometimes it feels like we need the latter...