The Crow and the Crowbar

Sometimes, writing, you feel like you've learned something very important about something very, very specific. Then you feel the need to crowbar it into a blog post. Bear with me for ten minutes, please.

First novels are a strange sort of book. Most of the 'first novels' you think you've read are actually the author's sixth or seventh full attempt—less a small larval thing and more a fully-formed beast, with teeth and claws, one that knows exactly what it's doing. The first few failed attempts will usually never see the light of day. Most writers, wiping cold sweat from their brow, say this is a good thing, and that you're not missing anything worth reading—the pacing is off, they say, and the characters are flat, the plot full of holes. Then they go home, drum their fingers on an old locked drawer, and wonder.

Some first attempts are irredeemable, and maybe they are best forgotten. I sympathise; a year ago I found some old short stories so abhorrent I was forced to flush them down the toilet in self-defense. But I think there's something special about a complete first novel: I've read a few, and for all their flaws they always have this strange and wonderful wholeness to them, like you can feel the writer's fear and excitement as they try to cram everything they know into it. They're surprising and bizarre, with plots like runaway trains and protagonists with mismatched grab-bags of character traits. You're never quite sure where they're going, or if they're going to get there in one piece.

There's usually a singular idea that forces someone to the keyboard, like a girl in the cupboard or a wizard living under the stairs. Sometimes if it's good enough it'll drive the book from start to finish, and you'll be able to see it in the finished product, woven through it, gathering meaning and momentum until the final pages. Most of the time, though, it'll fade, or get edited out, or recede into the background as a more powerful idea emerges - but regardless of whether it survives, there's something in that first idea that really means something. It's easy to forget it was once powerful enough to convince someone to write a hundred thousand words about it, and it's possible to be too eager in pursuit of a better work.

Books are a result of brains, and brains are a result of all sorts of awful things. Consider the brain of J.K. Rowling: shaped by poverty, a troubled family life and a deep fear of what the world can do to children, which then conjures the image of a boy who lives in a cupboard under the stairs. The inciting idea of a first book seems such a pure expression of anxiety, of who we are, that it seems a waste to hide it in a desk drawer, even if it did grow up into an ugly adult. Embarrassment doesn't sound like a good enough reason to me.

Have you ever heard the phrase 'Manic Pixie Dream Girl'? It's a term applied to a female character with surface-level quirks, who speaks to the feeling of displacement in a misfit male character and helps bring him out of his shell. The term is used to criticise these characters for their lack of depth or independent goals - they serve solely as a looking-glass for the male character (the one who really matters, obviously). The Second Death of Daedalus Mole sprang from a very specific idea: a man, out of necessity, creates his own Manic Pixie Dream Girl and the delusion eventually kills him. Also, for some reason, a crow is there.

Other ideas sprang up around him: humanity collapsed in the background to isolate him further; a distant victim reached out for help and found in him a hopelessly inadequate rescuer; the woman behind his delusion strengthened, becoming not only a character with agency, but a character struggling with her seemingly unlimited agency. Other women emerged, with voices, and fists. One has a baseball bat, and one is a starship that isn't a starship. The story evolved into something weird, with teeth, full of characters who, I soon realised, had been wanting to exist for years. 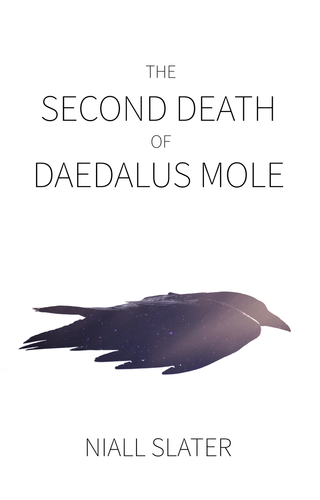 The Second Death of Daedalus Mole is, in one sense, a first novel. The conventional wisdom is that you should leave it in a drawer and move onto something else, but whenever I tried the drawer would rattle and leak black fluid and I had these awful dreams filled with pecking crows. Having failed to lock it away, I took it out, performed dramatic open-book surgery on it, and finally decided to enlist the help of professionals. Hence the whole... crowdfunding... thing.

As a business, books are still finding their feet in a newly-connected world. Niche audiences with very particular needs are spread far and wide, but the Internet brings them together in such a way that overly-specific ideas can have an audience that wants them.

For a long time people have lived whole lives without ever finding the book they really needed, but we're moving towards a world where every book is out there, is findable, and books that never would have seen the light of day before are now available all over the world. I'm glad to live in an age where weird ideas can grow wings.