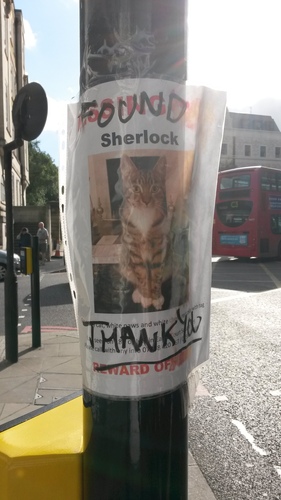 I'm twenty-four and until yesterday I'd never seen a 'cat found' poster in my life. It was so striking I had to stop and take a photo to send to all my jaded, miserable friends.

"Look at this," I cried, "doesn't this warm your sodden hearts? Don't you feel revitalised, reminded that some things in this life turn out for the best, even after passing through the coldest places? You broken, harried souls, witness to some of the bleakest times, bearers of insurmountable challenges, does this not heal you?"

They told me to fuck off. Not literally! They only texted me the words 'fuck off'.

Then, inspired by the name of this mysterious cat, I went and did a Twitter poll about whose Sherlock Holmes adaptation was better: CBS's Elementary with Johnny Lee Miller, or the BBC's Sherlock with Benedict Cumberbatch. The results were a resounding win for Sherlock, which shocked and appalled me in equal measure. I was careless, somehow allowing opinions different to my own to infiltrate my carefully-crafted online bubble of confirmation bias, where we all voted Remain and everyone understands that racism is, in fact, a bad thing and not, as some might have you believe, a good thing. It was a bad day for me. Remembering that people can be grown-up, reasonable and experienced and still manage to disagree with me is always difficult.

It's this moment, when the wider world suddenly invades your own personal bubble, that I often try to start from when writing a story. I find that the shock is a good way to shake a character out, to see who they are. It could be a dissenting opinion on a TV show, or a sudden reminder that their problems, their dramas, aren't the only ones out there. See? Other people have missing cats.

This isn't usually the best way to start writing something. It's a handy trick for placing self-absorbed, inactive characters at the moment that is most vital for them, and the moment you want to waste no time in getting to. In The Second Death of Daedalus Mole, it's the excerpt you can read on the project page. Erin has just invaded Daedalus's bubble. Something in him responds to something in her and sets gears turning in his brain, with consequences.

Chapter One is called 'Out of Characters'. It's out of character for Daedalus to help anyone other than himself, but in many ways Daedalus is not himself. The Second Death is full of these characters, people who aren't themselves. Some have been forced out of themselves, some have never really been themselves, and some have just become kind of... lost.

Imagine you have a cat. For illustrative purposes, here's mine: 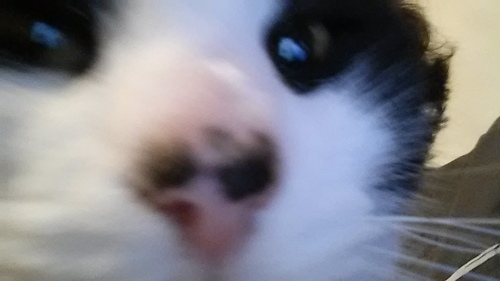 The cat is your idea of who you are - your aspirations, your beliefs, even your physical mannerisms. You don't have much control over it - it's not a dog - but it sticks around and doesn't really change much as you get older. Now, say something bad happens.

Maybe you're not in the house at the time, so you don't even know what it was, but you know that the next time you go looking for your cat, it's not there. You can go looking for it, or you can stick posters up everywhere in the hope that someone else can come along and help you find it, or you can just wait and hope that it'll come back - but there's nothing you can do to guarantee its return.

Lots of people lose their cats at one point or another. I wrote a book about people who haven't seen their cats in years, and who aren't sure whether their cats are still alive. If you've lost yours, I hope it comes home.