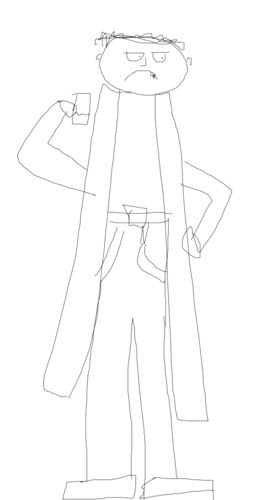 Writing a novel takes a while, and writers sometimes struggle to maintain the image of a character in their mind without forgetting important details. I ran into this issue early on with The Second Death of Daedalus Mole. I thought it might help to have some concept art. I was right! In the end.

Unfortunately, I can't draw. Visual art, to me, is indistinguishable from magic, and I have never managed to sketch a human being in any manner that suggests I've seen a human being before, or held a pencil before, or used a piece of paper before. Within moments of sitting down to try, I ended up with something similar to what you see here (dramatic reconstruction). Not particularly helpful.

Luckily for me, I know a few yet-to-be-discovered artists who are much more talented than I am. I quickly climbed the doorframe and hung upside-down until a meagre commission fee fell out of my pockets, and I took it to a promising young illustrator and animator by the name of Chel Traynor.

'C-Trayn, my guy,' I beseeched her, 'please take this character brief and turn it into a person. I have no idea who he is. My friends won't stop mocking my inhuman doodles.'

'First of all,' she said, 'you don't have friends. Second, this will only pay for like, fifteen minutes of sketching.'

Eventually I won out, and Chel returned with a concept for the character of Daedalus. I expected a drawn-out back-and-forth, where I'd nitpick details and try to bring it in line with the nebulous picture in my head. I was wrong. 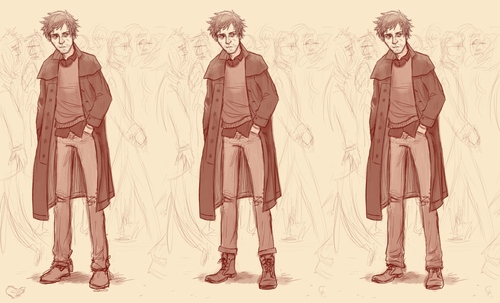 Somehow, by magic, she'd nailed the weird, lanky, haunted man first time. Ultimately the only thing I asked to be changed was his footwear. (See the journey across the three pictures.) Daedalus wasn't just an abstract bundle of components anymore, he was a suspicious, tired young man, uncomfortable in crowds. His clothes didn't fit. He didn't really know how to take care of himself. 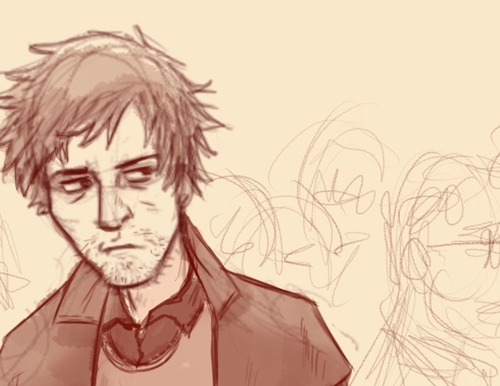 All the bits were there in the text, but Chel's illustration brought them together. I got to writing and more details began to coalesce around him, driving the character forward and influencing his companions. I had to go back and re-write earlier chapters to fit this newer, realer person, and the writing improved noticeably. It felt an awful lot like cheating.

Humans are one thing, though, and this is sci-fi. I soon realised there were bigger problems ahead.

Daedalus meets a few characters in his disastrous trip across the galaxy. Ram is a deserter from the Imperial Navy. She also happens to be a petradon - a species who've been established in the galaxy for much longer than humans, and who have issues with the millions of refugees fleeing Earth. They developed underground, and they're physically distinct. 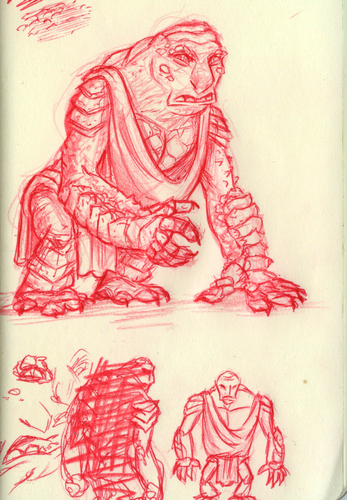 I wrote to Chel again, describing their physiology as best I could. Two things became apparent: firstly, I'd come up with a creature who was physically incapable of doing the things I'd described her doing in the book, and secondly, I'd forgotten at any point in the novel to describe the kind of clothes she wore. Chel quietly fixed these and sent me back some prototype sketches for how a petradon might look - how they might move around, their postures, silhouettes and skeletal structure.

Petradons are tall, strong and armour-plated. Their arms and hands developed from digging implements, and the early sketches seemed like they were halfway through evolving into bipeds. What you see here is a lot closer to the petradon equivalent of, say, homo habilis.

We bounced the ideas around a bit, and Chel helped me devise a form that seemed much more fitting for a spacefaring industrially-capable civilisation, while still being intimidating and far removed from the ape-like traits of humans.

A portrait slowly emerged in the form of Ram herself - but one of the trickiest problems was unique to her.

It was important to the characters' relationships that Ram had a particular kind of disability that makes it difficult for her to work with other petradons. At first I went for an ingrown skull-plate that caused cluster headaches, blackouts and infections - but Chel's illustrations made it clear that certain character interactions wouldn't work if the growth was internal and invisible.

I amended the text, instead giving Ram a birth condition comparable to bone cancer in humans. In Ram it's localised to her skull and protrudes to the surface. I bounced the idea to Chel and she sketched a portrait of Ram. Large, strong, but exposed. 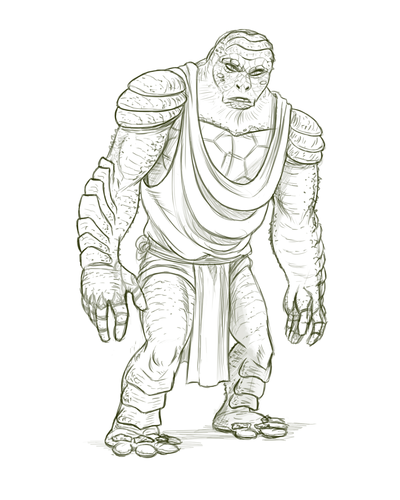 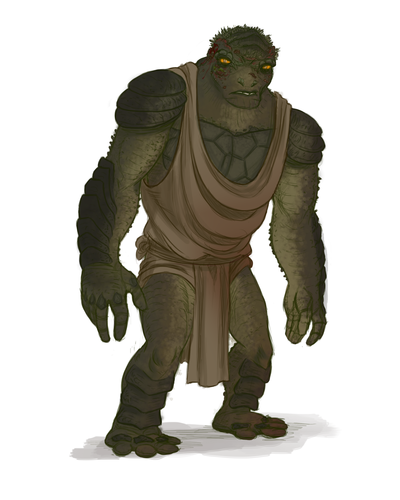 I did some clumsy fiddling about with the final colours to help myself better understand her anatomy, but Chel had done it again - Ram became real, and I found myself better understanding the difficulties she'd have interacting with the other characters. She's gentle and fearful and kind, but her body misleads people. There are points in the book where people fail to read her, and you can see how petradon faces don't allow for a broad range of expressions, sabotaging any potential friendship with more emotive species. It doesn't help that she's always bleeding from the head.

I wanted to explore how appearances colour our perceptions of strangers, and how drastically different someone might be from the image they choose to - or have to - present. Chel's work brought that to the fore and added a great deal.

I can't stress enough the value of a good illustrator. Someone who understands the source material and really inhabits the characters can add so much, even to a work-in-progress - any writer with a bit of cash lying around should seriously consider working with someone to help better realise their work. It's an incredible motivator, for me at least, to see someone draw a real, tangible thing out of a bunch of words I just made up.

Has someone shared this with you? You can pledge to support the book here!

Tweet me @Niall_Slater with hatemail or cool pictures of spaceships or anything else that tickles your fancy.

I don't know - It's not bad - better than I could muster.

I saw the Daedalus sketches last week and thought: "yes, this is what the inter-stellar pub crawl man looks like". The mind boggles that you had to review parts of the text upon realising your aliens couldn't do certain things. How difficult was it to overcome that?

Don't get me STARTED on that. I find it makes scenes feel much more natural if your characters wander around, fiddling with things and talking with body language, and figuring out what someone's doing with two arms is hard enough. One of my characters has four. It makes conversations tricky and fight scenes a complete nightmare. 'Hold her down' doesn't work to immobilise your character if she can just continually punch the mook in the face while he's doing it. I thoroughly recommend writing books where people do nothing other than sit in blank white boxes with a normal number of limbs while feeling no strong emotions at all. I'm pretty sure this is why postmodernism is a thing.