Hello all! Now that I've posted the lovely art of the Black Knight from Trungles in the last update, I thought I'd give you an excerpt (spoiler-free) from a later chapter where the Black Knight features. I think one of the benefits of coming back to prose writing after a lengthy sojourn in comics is it's made me quite good at blocking out action scenes and keeping them dramatic and suspenseful. Anyway, judge for yourself:

“I need to speak to His Majesty,” mutters Montagu, pacing. He points at the head. “Take this thing away and bury it. You, come with me,” he commands, his index finger rising to indicate the young knight who had spoken first. “You’ll give a full report in front of the King. Number of troops. Weapons. Likely nationalities. Tactics. If the King approves, we’ll raise a larger force and destroy this resistance and all who support them the same way we took care of it in Scotland.”

“I’d like to go,” says Harry, stepping forwards before he even realises it. “I’ve been on several raids across the border. I know some of the land.” Harry inhales, and plays his final card. “Sir Thomas Howland, too, he is the most experienced raider of us all.”

Montagu smiles at him, his hooded eyes as dead as a December garden. “Good old Sir Harry. We can always count on you.”

The King prevaricates. Sending enough men to end the border resistance once and for all would mean sending an Earl, and if they send an Earl, they might as well just invade France. The King doesn't want to invade until Germany and the Low Countries get off the fence. Plus, their army at Antwerp is not large. A hundred and twenty knights, plus about a thousand men-at-arms.

Then France sends its fleet against English port towns. Portsmouth is hit; Southampton, burned. The Channel Islands are seized. The news reaches Antwerp at the same time as a letter from Oliver Ingham, the English seneschal in Gascony, begging for help against a French invasion.

Edward sends messengers to England to begin raising real army. And he sends an Earl over the border.

Montagu takes a quarter of their men-at-arms and twenty knights, including Harry and Sir Thomas. They follow the Scheldt river southwest to Ghent and then towards Tournai, just across the line into France. Once they reach Tournai, they will turn north and travel along that border, killing and burning their way towards Calais. It’s a cumbersome force, ill-suited to fast raiding in enemy territory. Instead, Montagu plans to intimidate the locals into giving up the mercenaries: each village will be asked for information, and if they don’t respond, the village and everyone in it will be destroyed.

The monotonous, flat fields of Flanders are finally relieved by low hills as they approach the border. Sparse stands of trees thicken into forest and Harry is relieved for the shade, even if he misses the stark, endless visibility of the farmlands. The docile barns and quiet farmsteads of the plains are not all friendly to the English cause. Any one could harbor enemy combatants ready to slip out under the cover of night and devastate an English camp. The landscape reminds Harry heartbreakingly of Dartington, and he spends a day in turmoil, imagining men like them riding through Devon, burning and killing.

They cross the Scheldt at a little stone bridge late on their third afternoon, and then the small army makes camp at the edge of the elm forest just on the Flemish side of the border. Tomorrow, they ride into France. Tonight, their last night on Flemish soil, they eat cold rations of cheese and hard bread and sausage, and turn in without fires. Harry sleeps in his mail. He learned that lesson in Scotland.

Their first mistake is assuming they were safe in Flanders.

Their second is assuming the mercenaries would fight like Englishmen.

The raiders slay the sentries with knife and bolt in the deepest pits of the night, when the moon has already begun her decline. Harry jolts awake to the sounds of screaming and the creak and twang of crossbows. He slams on his helmet, grabs his shield and sword, and unlaces his tent flap. His first instinct is to head for Montagu, because he has a feeling that is where the Black Knight, this Chevalier de la Mort, will be. But as he looks cautiously outside his tent, his military instincts take over. First, he has to secure the horses.

The camp is pandemonium. Montagu brought with him a score of longbowmen but their ranged weapons are useless in a packed, close-range night fight in a forest. Harry keeps his shield up and his head down and yells “<To the horses! To the horses!>” as he runs through the camp towards the horse lines. He deliberately chooses to speak in English, hoping none of the raiders understand their language.

He ducks under a crossbow bolt and whirls, his sword coming up low and under the bowman’s short hauberk. Harry feels the wet suck of the sword hitting the man’s thigh bone and yanks hard, pulling it out. He runs on. There’s no point making sure the man is dead. If he can’t stand, he’s as good as gone, and with luck one of his friends will stop to help him. Then Harry will have stopped two raiders rather than just one.

A few men-at-arms from their camp stagger towards him, clutching weapons and shields, most still in their nightshirts. By the time they get to the horse lines there are a couple dozen of them, knights and spearmen and a few longbowmen, massed together. It’s enough to make them a hard target in a camp full of easy ones, and but for a few opportunistic shots from passing raiders with crossbows they’re left alone.

Harry doesn’t hear the sound of hooves anywhere but from their own horses, fearful and restless in their lines. Inside, he’s panicking, because he knows the raiders' mounted force is out there somewhere. But where? It makes his skin crawl, knowing that the main part of the attack hasn’t even happened yet, that any moment now will come the thunder of heavy armor riding them all down. The forest will slow them, but it’s an old forest, with tall trees and little undergrowth. Nothing to stop a mounted knight.

Unless the bridge is a trap.

“<Ride back along the river!>” Harry calls, his guts twisting in panic as he remembers the little copse of trees on the Antwerp side of the bridge. At what perfect cover it would be to turn the crossing into a killing ground. “<Don’t take the first bridge you come to. Take the second.”>

The men nod their understanding.

Harry calls to some of the men-at-arms he’s worked with before: Carl and Pete and Kev and old Lars. He has just enough time to point out the horses of the Earl and his household knights before the raiders – who hadn’t been avoiding them, they’d been organizing – are on them. It’s a dozen enemy against the six of them, but Harry is on horseback and Kev has his bow. Kev can shoot six arrows for every one from the more cumbersome Genoese crossbows, and they soon even the odds. Carl's hit, they can’t tell how badly, but Pete and Lars get him over a horse and they’ll worry about it later, when they have the luxury of time.

They push through the camp towards Montagu’s tent. Harry can see the knights of quality bunched in front of it, surrounded by enemy raiders.

Montagu is furious, screaming at the raiders from behind the cordon of knights defending him. “French scum! Brigands! Your leader calls himself a knight, then why won’t he come out and fight like one?”

There’s a soft, harsh sound then, somehow audible over the clash of steel and the thud of arrows into shields. It’s a crackling, gasping wheeze, and Harry realizes after a moment that it’s laughter.

A chill runs down his spine as he looks to its source. There, deep in the shadows of the trees, is a pool of even greater darkness: a knight, huge and broad in black plate, his shield plain but for a bend sinister, on a large black warhorse. And he’s laughing at them.

Harry can hear the muted chink of the horse’s tack as the knight shakes his head in amusement and turns his steed, disappearing into the forest. And that’s somehow the most terrifying thing of all: that the Black Knight didn’t feel like he had to engage. That they weren't worth his time. 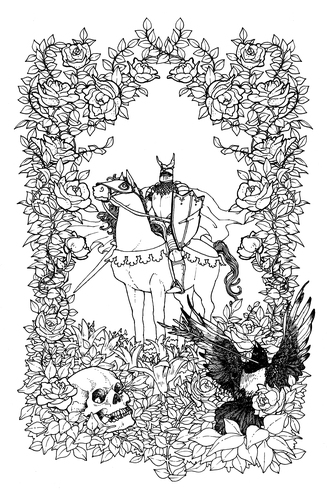 Ohh this made me want to get my hands on map! I like Harry- he seems intelligent & quick. Bad ass.