Hey everyone! This past week has been wild; I launched a graphic novel project with a friend and it became wildly successful (mostly because he’s really well known and we have amazing artists) but it sort of ate my week. I also got the final poster art for The Scottish Boy from Nick Robles and my god, it’s so gorgeous. I’ll share it once we have the logos on it — hopefully later this week!

The good news is, because of coronavirus-related shipping delays we’re putting off the US retail launch of The Scottish Boy until July 28th (American backers, you’ll still be getting your books in the next week or so, it’s just the store launch is later). I’m really happy about this for two reasons: first, it means hopefully bookstores will be open again, and second, it means Nick also has time to do a poster of Iain. (The one he just finished is Harry, dirty and exhausted after a tournament. It is... quite hot.) Fingers crossed that you all and the UK retail audience like The Scottish Boy and by the time it comes out in the US there are lots of positive reviews on Goodreads and Amazon (both are a huge factor in a book’s success, or not.)

Below is more of our digital art, two pieces from Tsumi: Iain at the beginning of the book, on the beach in Cumbria, and Ian near the end of the book, in the pond near Dartington. 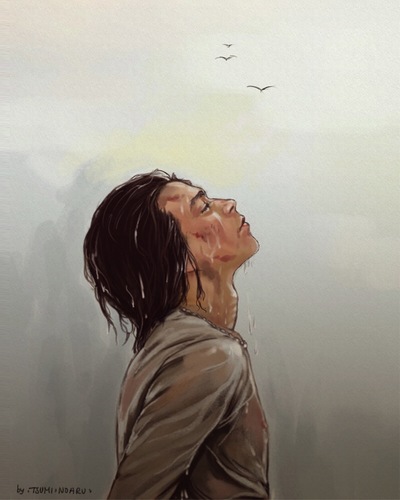 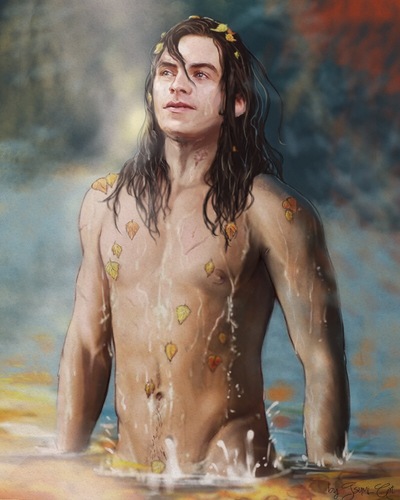 I’m three chapters in to recording the audiobook; I should be recording chapters 4 and 5 today. I’m sorry I’ve been slow on this. I had to pick out new audio equipment, then buy it and set it up, and all that caused me a rather large amount of anxiety. I finally did it, and now it turns out that READING WORDS IS HARD. I read to my daughter every night! I should be good at this! BUT NO. My voice at the best of times is whisky-and-cigarettes and now seemingly out of spite it’s gotten even more rough. I think the audiobook is going to turn out all right, though. I am trying to balance my perfectionistic nature with the need to get this finished and that’s generally a good place to be. My aim is to get it all recorded this week and then spend the next week editing it (Often I’ll do a few takes of a sentence because I’ll either stumble over a word the first time, my voice will do something funny, or I’ll not get the emphasis right.) I’lll post the first piece of the audiobook, part one of Chapter One, when it’s finished for you all to enjoy.

Hope you all are well and enjoying the book!

This is so exciting! All of this art is amazing, I'm THRILLED about Nick Robles joining in on the fun, and I can't wait to start reading! I'm so glad this project has come to fruition and you can really see how much love & effort you put into it. Thank you so much!

My copy has arrived (UK person) and it is one of the more gorgeous things I've seen for a while:)

Love these updates. So positive and energising!

I have it downloaded and ready to go this weekend - can't wait. Congratulations again to everyone involved!