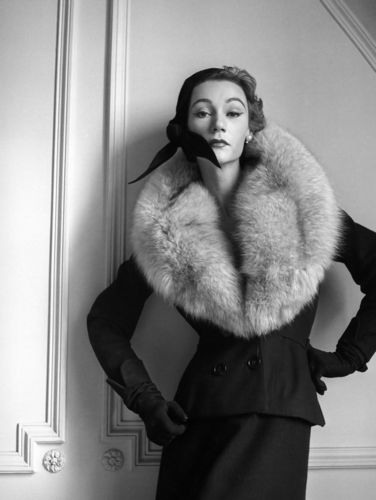 For much of the Forties and Fifties, American models dominated the world of fashion photography. The countercharge, when it finally came, started in Paris, where women like Sophie Malgat led the way from couture salons to magazine covers.

Whenever France’s midcentury models are discussed, the name that inevitably leads the pack is Bettina; the redheaded, freckle-faced girl from Brittany who took the salons of Paris by storm, and then crossed the Atlantic to enchant Manhattan. But Sophie Malgat, by contrast, has always seemed slightly in shadow. Softly graceful where Bettina was earthy, elegantly sly instead of sharp, Malgat’s sophisticated looks won her spots as a house mannequin in the cabines of Hermès and Jacques Fath — where she met and befriended Bettina, forming one of modelling’s first great double acts.

Born Simone Steur in Nice, Malgat arrived in Paris just as the city’s fashion landscape was transforming. In the late Forties, the couture houses that had once catered to a guarded elite were blossoming into global power-players, thanks to the surge in international fashion audiences. In parallel, France’s pret-a-porter industry was on the rise. And to serve both those markets, a raft of new magazines (led by Elle) boosted the demand for professional photographic models — a career which, to most well-brought-up French women, still smacked of scandal. But the models who worked in the couture houses, showing clothes in the salons for meagre salaries, had no such qualms. Malgat quickly became an industry favourite; renamed ‘Sophie’ by Fath, she worked regularly for L’Officiel, Marie France, Jardin des Modes and Vogue Paris in between shows. And during couture’s off seasons, she and Bettina ricocheted to and from New York, booking high-profile jobs with Gordon Parks, Nat Farbman, Mark Shaw, Milton Greene and Frances McLaughlin.

Malgat offered photographers an exotic, irreverent alternative to her impeccably groomed, stylised American contemporaries. But compared to those contemporaries, Malgat’s career was short; by the mid-Fifties, when a young Guy Bourdin memorably shot her in front of a backdrop of gutted rabbits at a Parisian market, she'd all but retired. She’d begun dating Anatole Litvak (the Russian-born director of The Deep Blue Sea, Mayerling and All This and Heaven Too) a few years before; a bachelor ever since he’d divorced Hollywood star Miriam Hopkins in 1939, few had expected that Litvak would settle down again. But he and Malgat shocked everyone by marrying in Las Vegas in the winter of 1955, and embarking on a glamorous international life together.

In the years that followed, she would work with her husband occasionally — taking on costume supervisor duties when he directed Five Miles to Midnight, for example, starring Anthony Perkins and a Guy Laroche-clad Sophia Loren. But for the most part, Madame Litvak seized new opportunities. She became a reporter for Paris Match, and fashion editor for the innovative womens magazine Femina; she dabbled in fashion design, and directed a play for one of her great friends, Françoise Sagan. The Litvaks entertained at their art-filled home on the Champs des Mars, and danced the night away in the city’s discotheques; they spent summers in their villa at St. Tropez (which Sophie designed), and winters on the slopes at Klosters — then home to a sophisticated, largely American expat set that included Greta Garbo, Irwin Shaw, Deborah Kerr, Peter Viertel and Barbara Mullen. As her Hollywood-accustomed husband once pointed out, “Switzerland is the nearest thing to the Unites States that you can get in Europe. Everything works, including the telephone, and its awfully pretty.”

But Litvak never cut her ties with the fashion world; she simply swapped the runways for couture’s front row, joining the Duchess of Windsor, Francoise Hardy and Helene Rochas on the tiny gilded chairs that lined the salons of Dior, Laroche and Chanel. She became one of couture’s most high-profile shoppers; newspapers reported breathlessly on her changing favourites, season by season — smoking suits from Saint Laurent and Cardin, low-backed Marc Bohan dresses, sophisticated gowns from Molyneux and the latest in space-age fashion from Courrèges. “It’s as though I’m a new woman when I wear Courrèges.” she laughed to one reporter in the late Sixties. “Some women change their noses and eyes, [but] I don’t think I’ll ever go in for plastic surgery. Goodness knows, we all get fed up with ourselves.”

Anatole Litvak died in the winter of 1974. His widow remained at the centre of Paris’s social whirl, always flanked by Sagan and dancer Jacques Chazot. But she only outlived him by a matter of years, dying in 1979 at the age of 53. All that remains of their fashionable life are his films and her pictures; everything else was quickly dispersed, sold off through the Drouot auction rooms a few days after Sophie's funeral.