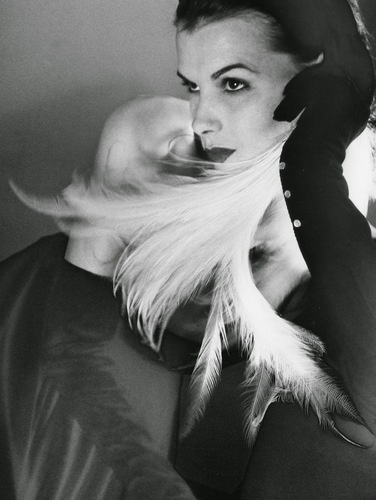 Ronnie Compton was one of the most glamorous models in America. Vera Lee was a merchant seaman’s daughter from Southampton. And Veronica Minette was the doomed widow of a Belgian count. But it would be decades before anyone realised that all three were the same woman.

Ronnie Compton died twice — once in the London Blitz, and once in a Northern boarding house. The first time (as with so much of Compton’s life) was make-believe; the second was brutally real.

Born in Hampshire in the spring of 1922, Vera Mary Lee was the second daughter of Frederick Butlin (a man who changed his name as often as his daughter would, and who gave her a surname he’d borrowed from his stepfather). Her mother, Frederick’s second wife, was German, and died of TB in a Southampton pauper’s hospital; Frederick remarried within the year, but abandoned his children. One brother was fostered, the other adopted, and six-year-old Vera and her older sister were sent to the local orphanage. By the age of 18, though, Vera had begun her own reinvention. A pretty, brown-haired teenager, she moved to London to embark on a modelling career. What ‘model’ may have meant, in the chaos of wartime London, is debatable. But Ronnie Lee was labelled as a popular ‘West End fashion model’ in the coverage of her wedding, at Paddington’s Registry Office, in the autumn of 1940 — though any press interest probably came from the fame of her new husband, Canadian boxer Joe Gollob, than from Lee’s own.

Within the year, the press would have occasion to cover the Gollobs again. Their marriage was a stormy one. Joe, away in the army, grew jealous; Ronnie, at home in Bayswater, did little to allay his fears. She sued him in 1941, for attempting to strangle her; he counter-sued, claiming she’d been having an affair. Joe admitted the assault, and insisted Ronnie had provoked him; in return, she declared he’d ‘gone completely off his head’, but conceded she’d been seeing another man — a man whose ‘name she did not wish to mention.’ That man may (or may not) have been Charles Compton, a dashing naval officer turned diplomat who later married Veronica, and took her to New York in the winter of 1944. She and Gollob had presumably divorced by then — though he spun their relationship’s demise out into a three-hanky tearjerker, regaling Canadian newspapers with the story that their London home had been bombed in the Blitz, disabling and then killing his beautiful young bride.

In 1946, still very much alive, Ronnie Compton was discovered by Richard Avedon whilst walking down Fifth Avenue. At 5’ 4”, she was shorter than any other topflight model of her day (even shorter than Dorian Leigh, her contemporary and occasional romantic rival). Yet she forged a successful career, working for a host of American photographers — who inevitably shot her in fascinated close-up, her heart-shaped face and sophisticated attitude compensating for those missing inches. And in 1950, she scored the ultimate modelling prize; an assignment to shoot the collections in Paris for Harper’s Bazaar. She posed for a series of spectacular Avedon spreads, in witty feathered hats and elegant gowns, the images carefully cropped to her torso and exquisite features.

Thereafter, Compton faded from the day-to-day business of modelling; why bother, perhaps, when the high life was within tantalisingly achievable reach? Whilst still married to her second husband, she’d enjoyed public romances with billionaire Howard Hughes and marquis-turned-racing driver Fon de Portago. And she remained a gossip column regular for most of the Fifties, cutting a swathe through the most eligible bachelors America had to offer. But in 1959 she married Edmond Minette, an obscure Belgian count and factory owner, and moved to the family's castle near Liége, to finally begin her happy ever after. But Minette was dead within a decade — and, at almost fifty, his widow found herself alone; back home in Britain, and once again thrown back on her own devices.

Within a few years, there was a new love interest; John Gartland, a young man from Sunderland, who would remain Veronica’s boyfriend for the rest of her life. They moved from London to South Shields, their up-and-down romance played out in a succession of the town’s down-at-heel guesthouses. Those who met Mrs. Minette spoke of her vaguely, but kindly. A trained nurse, they understood, who complained about Gartland's behaviour regularly; a quiet woman, who looked older than her years; a widow, who spoke with a faint foreign accent. By then, though, they were speaking of a dead woman. In September 1976, in their third-floor room at the Acropolis boarding house, Ronnie began complaining to Gartland again. ‘We were living on social security,” he confessed to police officers afterwards. “and she more or less said she was dissatisfied. She was going on about her life in Belgium and said she was being brought down to gutter level.” Gartland snapped, and attacked Compton, just as Gollob had thirty-five years before.

But here was no doubt, this time. The coroner’s report concluded; ‘Asphyxia due to suffocation and manual strangulation. Defendant convicted of manslaughter.’

*With thanks to the Lee family for their extensive research into Veronica’s early years and later life.

Vera was my aunt and in researching our family tree I was aware of much of your biography. Congratulations on your excellent research! I’ve learned a few new things in particular about her relationship with Jo the boxer and her life after Charles Compton.