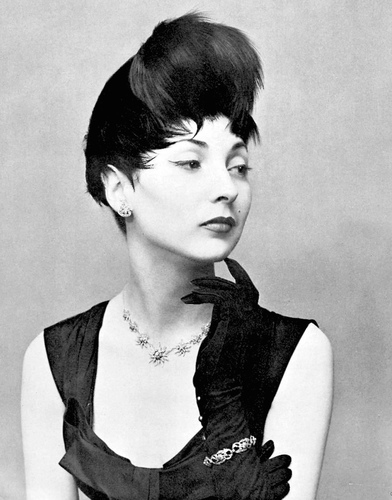 It seems only fitting to be writing about Renée Breton in Paris, in the springtime. Three weeks younger than Barbara Mullen, she spent most of her career as one of Christian Dior’s most treasured muses. She embodied midcentury French elegance — and her career was in many ways the antithesis of that most top-flight American models enjoyed.

Renée Breton hated change. She always insisted on the same dressing table at the Dior cabine, adored the unchanging routine of life as a house model, and hated foreign travel. Every day, she twirled and glided her way through the salons of Avenue Montaigne, a swan princess in the most spectacular couture creations — and every evening, while colleagues prepared to meet lovers, she changed back into unobtrusive clothes and took the bus home to her apartment near the Porte Maillot. It was a routine that had begun in 1947. when she was still only 19 years old, chosen by a little-known designer called Christian Dior to form part of his first line-up of models.

In that incendiary first collection, Breton modelled Dior’s now-legendary Bar jacket; the photograph Willy Maywald took of her in that outfit had become the New Look’s defining image. And for the next ten years she continued to wear Dior’s collections, part of a loyal group of long-term employees that stayed by the designer’s side throughout his career. ‘Of all my mannequins,’ he wrote in 1956, ‘Renée is probably the one who comes nearest to my ideal. Every dress she puts on seems to be a success, as though there existed an exact equivalence between her proportions and those of my imagination. She brings fabric to life so exquisitely that her face is lost. As she shows her clothes, distant, aloof, it seems as if her very life centres around the folds of the material.’

For her part, Breton spoke little. ‘He’s very kind.’ was how she described her boss to American newspapers, on a rare foreign tour with Alla and Dior himself in the spring of 1957. By then, she was one of the most famous French models in the world — a fame that had come in part from Breton’s sideline as a photographic model, used over and over again as an exotic foil to the American mannequins that Vogue and Bazaar flew in to pose for the biannual couture collections. She was the star of Dior’s cabine — but she gracefully played second-fiddle for the big magazines, a fantasy of Frenchness opposite Mary Jane Russell in 1954 and 1955, and Barbara Mullen in 1956.

Despite her homebody nature, she was out of the country when Dior died in the autumn of 1957. His other mannequins, most notably Alla Inchun, soldiered on under the new Saint-Laurent regime. But Breton, unexpectedly, made a clean break. “I felt I could not go back.” she confessed. “I loved M. Dior. It would be different without him.”

Instead, she struck out for New York, and before the end of the year had signed with the Fords. She quickly became a popular editorial and runway model on the American fashion scene — most famously, perhaps, thanks to her inclusion in Erwin Blumenfeld’s groundbreaking ‘Rage for Color’ shoot for LOOK. “Of course, chez Dior I made less money.” she acknowledged. “But the work took not so much time . . . I am a funny Frenchwoman. I do not care for cusine.I eat little and if I must, I eat in a hurry.”

She would model Dior’s Bar suit once more, for a glitzy museum benefit in Manhattan. In 1959, she married a successful hotel manager, but continued to work — first as a model, and then increasingly on the sales side. There was a stint at a Seventh Avenue manufacturer, and then a few seasons with a flashy young designer called José de Lema, who briefly operated out of the Hilton hotel. By the Seventies, she was ensconced at Saks Fifth Avenue, working with Revillon. When she died, in the spring of 1979, she got a glancing mention in the New York Times’ death notices, mourned only by her colleagues and her father.