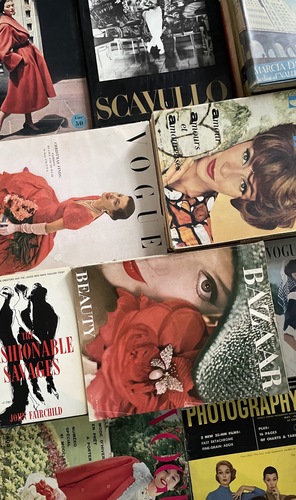 It's been a while.

Seven years, six months and eighteen days to be precise, since I first met Barbara Mullen. And nine years, two months and twelve days (give or take), since I first saw Lillian Bassman's portrait of her, photographed at La Grand Véfour in Paris in 1949; an impossibly long streak of arm and neck, slicing across the frame - and a face twisted away from the camera's glare, disappearing into the shadows.

12,788 screenshots from Google searches. 4,269 downloads from online resources. 450 scans from Barbara's own archive. 95 interviews. Page-by-page scouring of 73 different magazine titles (English, French, German, Italian, Spanish, Swiss), ranging from a single issue to fifteen-year runs. 263 non-fiction books, 95 biographies, 64 novels, 32 screenplays, 8 plays. And 1 endlessly surprising subject, less than six months away from her 94th birthday - but still, she would like everyone to know, sticking at 85.

The book, in structure and outline, is exactly the same as it was when I first pitched it to publishers in the summer of 2013; 24 individual essays, each one exploring a different moment of Barbara Mullen's long career. Some chapters were only written in the latest lockdown; one or two are older than most of my nieces and nephews. But now they're all condensed down into a single file - 84,000 words, in double-spaced 12-point Times New Roman - that measures only 750kb. It seems, after all that, ridiculously small.

All that's left is to hit send, and watch it go out into the world - or at least to an unfortunate editor, who's about to get swamped in the world of midcentury fashion modelling from 1945-1962.

Thank you. So looking forward to this!