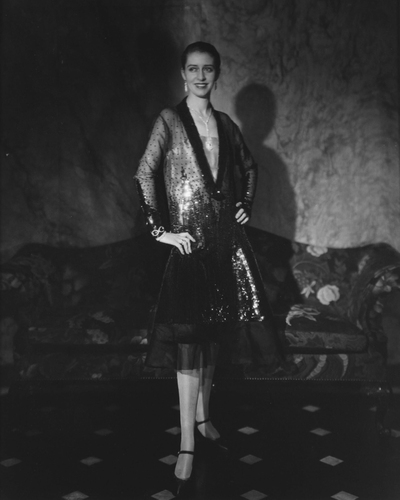 Barbara Mullen’s story is unique. But it’s just one of hundreds of stories that could have been written about the modelling industry’s early pioneers. While Unbound’s campaign to publish Mullen’s biography continues, we wanted to tell the story of some of these other forgotten figures.

When Mullen was born in June 1927, the cover of Vogue featured a slim figure on board a rowing boat. Her body is boyish, flattened in a sweater and skirt, with one slender arm stretched out towards the sea. The image was created, as all Vogue covers of that era were, by an artist rather than a photographer — in this case, French illustrator Georges Lepape. On that month’s newsstands, it sat next to Harper’s Bazaar (drawn by Erté, with an abstracted woman’s head in the bottom corner, whilst another head floated off towards the masthead like a balloon) and Vanity Fair (a Marian Wildman sketch, of two women on a swing slung between palm trees, outlined against the setting sun).

The Twenties was the start of the fashion magazine industry’s golden age — an age that was still predominantly an illustrated one. But behind the evocative, romantic covers, things were starting to rapidly change. Intricate borders and elaborate fashion drawings were being swept away by a new generation of art directors and editors, eager to champion the still-new discipline of photography as a way of communicating modern fashion to a modern audience.

It’s easy to understand why; a photographic image could show the visceral reality of clothes, in all their alluring, intricate detail, in a way that a drawing could only ever delicately suggest. But what nobody counted on was the fact that the camera’s gaze would end up deflecting away from the clothes, onto the compelling presences of the women who inhabited them.

There are plenty of candidates for the crown of ‘first fashion model’; Dolores, Dorothy Stuart, Lee Miller. But Marion Morehouse, a lanky, dark-haired American actress, is unquestionably the most intriguing. She enters fashion history in 1924, when she entered a Vogue talent search to find mannequins for French couturier Jean Patou. She didn’t win — but Morehouse was noticed by the magazine’s editors, and was soon put face to face with Edward Steichen, one of its first photographic stars. In the years that followed the two collaborated regularly, to spectacular effect. His portraits of her — tall, glowing-skinned, elegantly sleek in glittering Twenties flapper gowns by Chanel and Cheruit (“Marion had no corners,” the playwright Sophie Treadwell once remarked) — have endured long beyond their predestined moment. Jessica Daves, Vogue’s editor through most of the fifties, compared Barbara Mullen’s own dark, imprecise, mercurial beauty to Morehouse’s. And towards the end of his life, Steichen was still hailing her as ‘the greatest fashion model I ever shot’.

So, hardly a forgotten woman But Marion Morehouse is known, where she is known at all, because of and through Steichen pictures. Beyond that, all we know — and are told over and over again — is that she was a model, who famously married the poet e.e. cummings, and lived with him to the end of his life. She died in Greenwich seven years later. Her body was cremated, and her possessions dispersed. The rest is a blur of half-told stories; of a woman born somewhere in Indiana when the twentieth century was still hopeful and new, who had some vague theatrical success in her youth, who may (or may not) have made fleeting appearances in silent movies, and who seems to have had some quietly-nurtured ambitions towards being a photographer herself. She was unstintingly unhelpful when biographers came to call, waving their spotlights away from her life.

Marion Morehouse chose not to share her story, and shape a narrative for herself. And why should she have to? But the result, inevitably and perhaps irrevocably, is that she endures only in the images and words of others. In 1953, twenty years after they’d married, and almost thirty years after she’d become a professional model, cummings looked up one day to see his now-fiftyish wife returning to their apartment ‘young lovely & gifted with beauty — as a deer in a glade, unconscious of anyone else, is beautiful.’