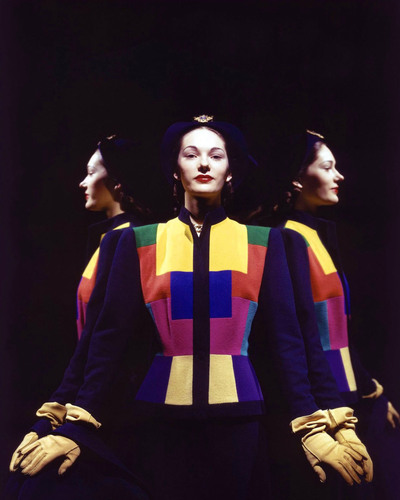 Many of the top models of the Forties and Fifties enjoyed exceptionally long careers. But even by those standards, Marilyn Ambrose was exceptional, enjoying two decades of top-flight success — forging a now-faded reputation as one of the most elegant women in fashion.

In 1947, Irving Penn’s now-iconic portrait of the most photographed models in America was first published. Shot against a sparse studio backdrop, the picture documented a group of poised, mature women in their thirties and forties. The only exception was a 24-year-old called Marilyn Ambrose, drafted in (alongside Dorian Leigh) as a last-minute substitute. A year later, Ambrose appeared in another famous group image, this time waring Charles James gowns for Cecil Beaton. Three years later, she’s hovering in the margins of a Mark Shaw image of the Ford Agency’s top models, sandwiched between Lucille Lewis and Jean Patchett. Fast forward to the end of the Fifties, and there she is again; this one taken by Richard Avedon and printed in McCall’s, under the headline ‘A MILLION DOLLARS WORTH OF MODELS!’,

Born in Oklahoma, Ambrose grew up in New Jersey, and studied at the prestigious Duke University. But in her sophomore year she won an ‘Unknown Beauty’ magazine contest, and by the time she graduated had the first of her Vogue covers already under her belt. Unlike most of her contemporaries, though, Ambrose’s career never entirely took off; and yet, likewise, she never completely faded from view. In the Forties, she’s shooting static, statuesque images for Horst; in the early Fifties, her hair cropped, she’s a regular subject for up-and-comers like Francesco Scavullo. And on, and on, and on; colourful ad campaigns for Dick Avedon, striking editorials for Genevieve Naylor, Lillian Bassman and Clifford Coffin, and magazine covers for Constantin Joffé.

And as her career evolved, so did her life off-camera. Married at 25 to an eminently suitable young doctor (and photographed for Vogue by John Rawlings as the perfect model bride), she burst back into the gossip columns mid-fifties thanks to flings with photographer Phil Stearns and millionaire Amaury de Riencourt. She went on to have a brief, difficult second marriage to avant-garde film-maker Emile D’Antonio (with whom she shared a mirrored Manhattan apartment) — before marrying again, in the mid-Sixties, to a Harvard psychiatry professor, and evaporating without trace. Ambrose never entirely seemed of the moment; old-fashioned by the time Mullen and her contemporaries surfaced with their reed-thin bodies and graphic faces, and an industry veteran by the time Jean Shrimpton exploded onto the scene. But those long years of experience made her an astute observer of her own profession; profiled by the New York Times in 1961, as she was making the shift behind the camera to life as a photographer’s representative, she reflected; ‘You’re spoiled when you model. People pamper you. Photographers and editors flatter you. You wear prettier clothes and travel to places you could never afford otherwise. And you begin to think you deserve it.’