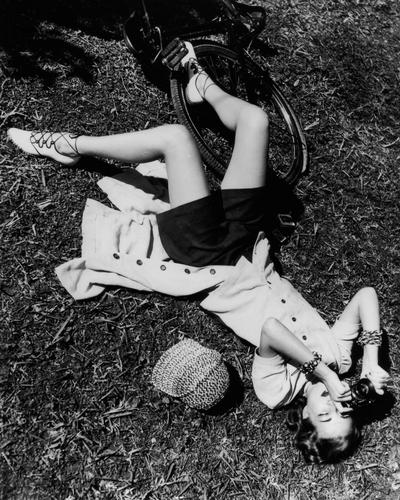 If any of Manhattan’s first generation of models could have successfully told (and sold) their story, it would have been Liz Gibbons. She did, in fact, over thirty years ago — a fascinating historical document of a fashion industry just beginning to take shape. But the manuscript was rejected by her publishing house, and has lain untouched ever since.

Like many models, Liz Gibbons name is known today largely because a famous photographer plucked her name from the shadows. In Gibbons’ case, it was Louise Dahl-Wolfe, who mentioned her in a 1984 interview with the New York Times (coinciding with Dahl-Wolfe’s own overdue rediscovery): “The first model that ever inspired me was Liz Gibbons,” she reminisced, “this long, long girl whose skin was almost gold.”

But if Louise Dahl-Wolfe made Liz Gibbons’ reputation, then Gibbons also arguably made Dahl-Wolfe’s. Rejected by Vogue for being too old, and struggling to find a foothold in the city’s nascent freelance scene, Dahl-Wolfe languished in the background at Bazaar until Gibbons walked into her studio in 1936. By then, Gibbons had been struggling too; born in Alabama, she’d moved to Manhattan to pursue a career in design, but found a city leached of opportunities by the hardships of the Depression. After short stints as a sales-girl, an advertising assistant and a photography studio PR, a twist of fate saw her coaxed into taking part in a catalogue fashion shoot. But her pronounced, powerful features and stiff movements put off most of the photographers she tested with. She’d been on the verge of giving up — until Edward Steichen, rejecting her with touching, gentlemanly kindness, recommended she seek out Louise Dahl-Wolfe.

The two clicked instantly, producing pictures which captivated Carmel Snow, and which catapulted them both to front-page status. Though many of the most enduringly famous are in luminous monochrome, the two women produced sumptuous colour shoots that showcased Gibbons' sophisticatedly bored attitude (and the rich skin tone whch had first seduced Dahl-Wolfe) in a variety of exotic locations. Together, they were allegedly responsible for the first-ever published fashion photo in which a model was laughing; they were certainly responsible for the first published nude shot in a fashion magazine. And the success brought Gibbons to the attention of other photographers like George Platt Lynes and Irving Penn (who immortalised her for Vogue in 1947, alongside 11 of her contemporaries, in his iconic 'Twelve Beauties: The Most Photographed Models in America.')

It was Liz Gibbons' final sitting. She had already begun a successful career off-camera, becoming a fashion editor both at Bazaar and Glamour, before marrying and moving to California (where she took up a position as Vogue's West Coast correspondent, and became a champion of Los Angeles' midcentury art scene). Her memoir is an extraordinary document, both in its capturing of the early fashion hubs in Paris and New York, and its depiction of the realities of a model’s life. Honest, funny and self-deprecating, it offers a surprisingly contemporary view on experiences which veer from the poignant to the harrowing to the absurd — experiences with which all too many 21st century models might be able to empathise.