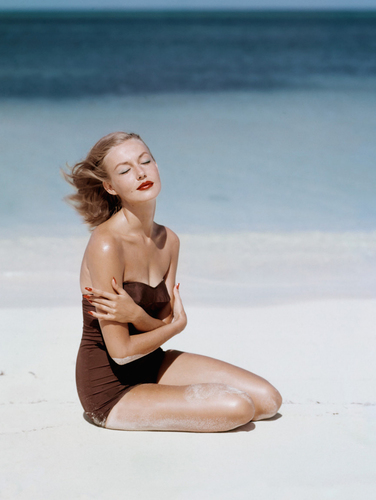 For some, modelling was an end in itself. But for Liz Benn, it was a springboard — one that catapulted her from a humble Canadian upbringing to life at the helm of the Caribbean’s most glamorous resort.

It’s hard to imagine Liz Benn ever having an awkward age. From the very start, her pictures radiated a commanding presence; skin glowing, stance confident, profile always perfectly tilted into the light. Even in out-of-the-way Toronto, aged just 13, she caught the eye of casting agents searching for a girl to play the lead in MGM’s National Velvet; Benn made the shortlist, but was deemed too tall for the role (she lost out to the more experienced — and suitably shorter — Elizabeth Taylor.)

It would be one of the few times in Liz Benn’s long life where her height would prove a problem. By the time Hollywood came calling, she’d already built up a successful modelling career in her hometown, working part-time out of school hours to help support her struggling family. Focused and ambitious, by the age of 18 she’d saved enough to buy her parents a house, and a car — and herself a one-way plane ticket to New York. She arrived there in the spring of 1948, was signed by Eileen and Jerry Ford’s fledgling agency, and got booked by Richard Avedon for her very first assignment. Within two years, Benn had appeared on four Bazaar covers, and had racked up advertising and editorial credits for the likes of Lillian Bassman, Roger Prigent and John Rawlings.

That winter, Benn flew to Jamaica with Mary Jane Russell and photographer Toni Frissell. Landing at Kingston, they found an eager young local hotelier, John Pringle, on standby to welcome the glamorous American arrivals. As Russell — his first choice — was already married, Pringle turned his attention to Benn; they fell in love, got engaged and then married in a matter of weeks. For the next few years, the couple made their home in New York, where Pringle opened a successful menswear store whilst his wife continued to model. But Jamaica, in the end, proved too much of a lure. In 1953, the Pringles returned there, transforming an old plantation near Montego Bay into the island’s most exclusive destination. Noël Coward was the first to buy one of Round Hill’s bungalows, and the cream of the international jet set quickly followed suit; the Astaires, Paleys, Kennedys, Gables, Bernsteins and Snowdons all became regulars at the destination whose welcome mats proudly proclaimed ‘Go Away’. And whilst John Pringle was the resort’s ebullient front man, his glamorous, formidable wife played an equally key (if quieter) role. “When I first met Liz Pringle,” banker Henry Tiarks remembered, “I felt like a Boy Scout being inspected by Queen Mary.”

That’s where, by rights, Benn’s modelling career should have ended — as the ornamental fulcrum of a sun-kissed social whirl. But instead, against the odds, it went from strength to strength. She rarely travelled back to Manhattan, but the photographers that had booked her so regularly there came to her instead. Avedon, a lifelong friend, visited regularly with his family, and photographed her for Bazaar and LIFE. She did editorial shoots on Round Hill’s spectacular beaches, with Norman Parkinson, Slim Aarons, Louise Dahl-Wolfe and John Rawlings — who famously shot her for a Vogue cover in a strapless Givenchy swimsuit, her suntanned skin glowing against a cobalt blue sea. It’s perhaps the most famous picture ever taken of Benn, and it sums up her unique appeal. Vital and charismatic where her contemporaries were anonymously ethereal, she dominates the frame —even with her body folded behind her, and her eyes closed.

Thefairytale, like all real-life fairytales, came to an end. In the early Sixties, overworked and overtired, the Pringles sold Round Hill and moved to Switzerland. They returned to Jamaica to help build the island’s profile as a tourist destination in the Sixties, before decamping to London where Pringle took up a role running Doyle Dane Bernbach’s British office. The couple divorced in the Seventies, but remained close for the rest of their lives. And Benn returned to her beloved Jamaica — where, right to the end of her life, she commanded attention wherever she went.