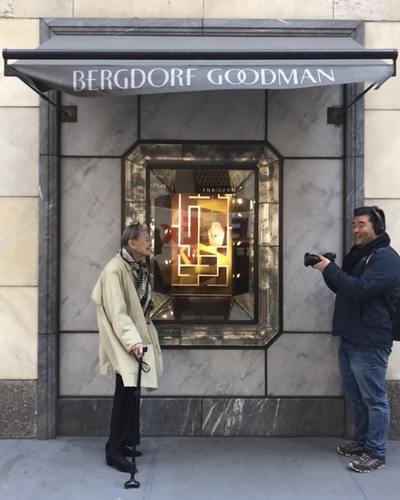 It's the most clichéd of clichés, but sometimes life just gets in the way. And so, for most of the last six months, thanks to an obstacle course of different events - work, family, health, Brexit - The Replacement Girl has been on hold.

But we're back. And having hit the 85% mark during the hiatus, it's beginning to feel like we're on the home stretch - wrapping up interviews, agreeing image rights, and raising the outstanding funds to make the project a reality.

Plus, in parallel, director John Sanvidge has begun working on a documentary about Barbara Mullen's life and career. So last month, over the course of two brilliantly sunny, blisteringly cold days, we returned to Manhattan to shoot a series of interviews for the project. For the most part, we filmed in midtown, among the avenues and cross streets where Barbara's career began - and returning to Bergdorf Goodman, where she landed her first modelling job in 1945. Lots has changed at 754 Fifth Avenue since those days.The store looks very different now, both inside and out. But on the fourth floor, where Barbara once paraded though the store’s couture salons, it’s still a world of soft light and sparkling gowns and wealthy women.

And finally, some eighty years after Barbara Mullen left 125th Street behind, we went back to film in her childhood neighbourhood. Harlem is a landscape now colonised by Starbucks and McDonalds (and a reincarnated Cotton Club), but in most other respects it’s still much as it was during the Depression; the brick apartment blocks and narrow courtyards, the green ridge of Riverside Park, the rumble of the elevated rail line. It was a happy, moving, funny morning. And it seemed fitting, nearing the end of this six-year-long process, to go back to the very start.