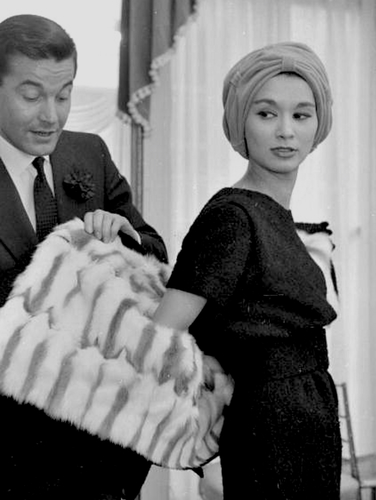 From Cote d’Azur beauty pageants to animal rights protests, and from couture salons to encounters with royalty and movie stars, Liat Sandys’ modelling career was — at the very least — never boring.

I’ve been living with the stories of most of the women I’ve written about for the best part of five years. But a few weeks ago, out of idle interest, I ran a Google search for ‘top fashion model 1958’. One of the first images to flash up was of someone I’d never seen before — a woman in a mirrored room, her frame twisting away from the camera towards a smiling observer. The caption shed a little more light, and provided the start of a breadcrumb trail; ‘Anglo-Indian fashion model Liat Sands models in the Mayfair salon of top couturier Ronald Paterson. Her boyfriend Ken Swift admires the squirrel fur lining of her dress and jacket.’

The phrase ‘Anglo-Indian’ (like most long-standing, straightforwardly descriptive terms) is far less straightforward than it should be. For most of its history, its usage has been split cleanly in two; applied equally to people of British descent who’d been born in India, and to people of mixed British and Indian heritage. But in the Fifties, on London’s modelling scene, it was a narrative adopted on more than one occasion by women who slipped between both definitions. Nina Dyer’s exotic looks, and stories of a childhood spent on a Ceylonese tea plantation won her countless column inches (albeit relatively minor professional success) in the run up to her two spectacular marriages; it was only after her tragic death — and a protracted court case — that Dyer was proven to have been born in London, the daughter of a couple from a very un-exotic part of Surrey. Calcutta-born Anna Kashfi, meanwhile, soared to success both on runways and on screen. But her marriage to Marlon Brando became mired in tabloid drama when her estranged parents, based in Cardiff, emerged wielding a birth certificate to prove her real name was Joan O’Callaghan. (Sixty years on, Kashfi’s claims that she’d been born to an Indian couple, and adopted soon after birth have never been definitely confirmed — or disproven.)

But Liat Sandys (not Sands) was clear, right from the start. The daughter of an English man and an Indian woman, her early appearances in print came thanks to stints displaying traditional saris at London trade fairs. By 1958, she had become a successful mainstream fashion model — and her face had been splashed across newspapers round the world when she won the title ‘Bronze Venus of the Riviera’. But it would be her social life, rather than her work, that kept Sandys in the newspaper headlines — first thanks to her romance with playboy gambler Mark Sykes, and then with a Danish suitor who ultimately decided that the 15 cats she shared her apartment with were too much to handle. But if Liat Sandys is remembered today (if at all), it’s for her relationship with Marlon Brando — whom she pronounced ‘the strangest and most paradoxical human being I’ve ever met’.

The two were introduced in 1959, in Paris, where Brando was recuperating from his breakup with Kashfi, and where Sandys was recovering from a car crash that had temporarily stalled her career. The first, unpromising encounter between awkward Hollywood star and baffled model ended with a surreal poetry reading in Brando’s hotel suite in the small hours of the morning. But it led to a playfully affectionate friendship, that would continue decades after Sandys’ modelling career ended. She switched to acting in the Sixties with limited success, scooping up occasional theatre roles and TV bit parts; ‘I have spent a lot of time going to auditions and being told ‘We’ll let you know’ ’, she sighed to The Stage. Simultaneously, galvanised by Ruth Harrison’s book Animal Machines, she became a vocal protester against modern farming methods. It soon took of all of her time (and savings). But Sandys proved to be a highly effective spokesperson; she managed to set up face-to-face encounters with the Minister for Agriculture, Prince Philip and even the Queen, keeping her name — and her cause — in the headlines on a regular basis.

By the Seventies Sandys had become a secretary, working for a small investment banking firm in South Kensington. And in the early part of that decade, she wrote an affectionate tell-all about Brando for an American women’s magazine. But after that, her name simply disappears, with no record of what came after. ‘I wouldn’t mind becoming an old maid surrounded by cats.’ she’d told a Daily Mail interviewer, at the height of her success. Perhaps she did.