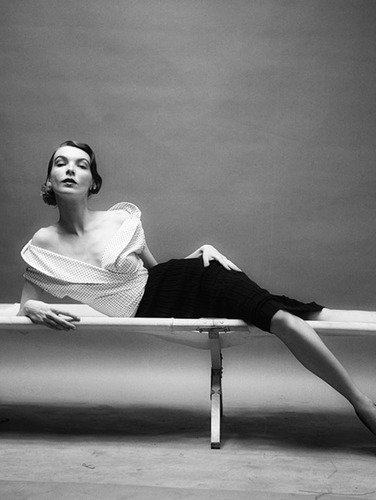 Howard Hawks promised he’d make her a star. But Katherine Cassidy decided to go her own way, and chose modelling — and money — over the movies.

“It’s fine while it lasts,” Marie Icide yawned. “Like many models, I hope to be either a dress designer or an actress.”

It was the summer of 1945. And on a Paramount Studios soundstage, Icide — a precocious half-Irish, half-Romanian teenager — was being interviewed whilst filming The Stork Club, a Betty Hutton movie set in Manhattan’s hottest nightspot. The world-weary attitude was only part-affectation; born in Illinois, Icide’s family had moved to Los Angeles when she was still a schoolgirl. Her father worked for Fox Studios, and sent his only child to Hollywood High, where contemporaries included Jason Robards, Gloria Grahame, James Garner and Judy Garland. After graduation, and a short course at one of the city’s many modelling schools, Icide joined the thousands of hopefuls hovering on the margins of the movie industry. Stints posing for local magazines and designers alternated with glamorous (if brief) walk-ons in films like Weekend at the Waldorf, Her Highness and the Bellboy and Douglas Sirk’s A Scandal in Paris.

But Icide wouldn’t stay in the background for long. Spotted by Howard Hawks, who’d orchestrated Lauren Bacall’s rise from model to movie star three years earlier, she was swiftly placed under contract, put to work with acting and voice coaches, and rebranded as Katherine Cassidy. Hawks ensured his protegé was seen in all the right places; there was a dramatic full-page portrait for Vogue by Herbert Matter, and a three-page Sharland feature in LIFE. But somewhere along the line, Cassidy went rogue. “I thought it’d be very good for me to see New York and see some plays.” she told a reporter. “The day after I got here I started modeling at $25 an hour — I loved it and decided I’d stay.”

Hawks, predictably enough, was furious. “I felt terrible about it.” Cassidy later declared (not terribly convincingly, it has to be said.) But she went her own merry way, and quickly found success in Manhattan’s modelling world. Arriving on the scene at the same time as Jean Patchett, Cassidy shared that same winning blend of youth and arrogance, and built a roster of work with Frances McLaughlin, Diane Arbus, Fritz Henle, Louise Dahl-Wolfe, Serge Balkin, Milton Greene, Lillian Bassman and Erwin Blumenfeld. In the years that followed, she bounced back and forth between Manhattan and Hollywood — appearing in blink-and-miss-it roles in movies like Son of Sinbad and The French Line whilst on visits  to see her parents. But that was as far as her interest in the silver screen went. “My salary as a model here last week was $650.” she told one Big Apple gossip columnist in the mid-Fifties. “The week before it was $525. It’s not profitable for me to be in the movies.”

It may well have been a purely financial decision; for most of her career, Cassidy was making in excess of $20,000 a year as a model. It might, also, have been discomfort at having her career, and her life, so firmly under Howard Hawks’ control. Or it might have been the fact that, as a gay woman, the glare of fame would simply have been too hard to manage. Modelling offered glamour, excitement, interest — as well comparative anonymity, and freedom to live her life on her own terms. Away from Hollywood's spotlight, Cassidy became part of the youthful in-crowd that adorned Peggy Fears’ new Fire Island resort — and back in Los Angeles, through the photographer William Claxton, she befriended a young swimwear designer named Rudi Gernreich. Gernreich brought Cassidy along to early meetings of the Mattachine Club, the pioneering gay rights organisation he established with his partner Henry Hay. But she fell away as the movement gained momentum, and gradually faded from the picture. Gernreich found a new Mod muse, in the shape of Peggy Moffitt. Hawks anointed a parade of replacement starlets, from Betty Threatt through to Joan Collins and Angie Dickinson. Katherine Cassidy, to all intents and purposes, disappeared; and Marie Icide lived on, in quiet obscurity, dying in Los Angeles in 1993.