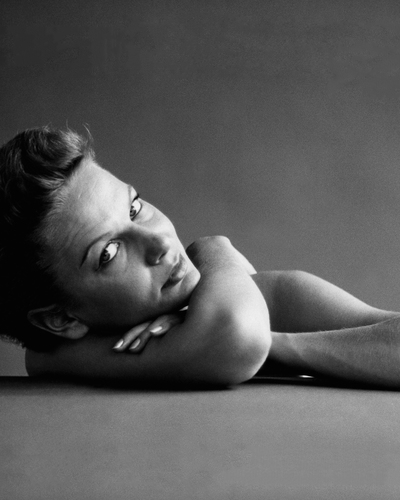 Joan Pedersen grew up dreaming about dancing. But fate led her to modelling instead, and to a successful career that flew largely under history’s radar.

World’s Oldest Living Cover Girl. It’s a title that rests lightly on the shoulders with Joan Pedersen Coleman, an elegant, chatty 93-year-old, who first graced the cover of Vogue seventy years ago — and did so in some style, appearing on three covers in as many months. In late June, sprawled across grass, she recreated Manet’s Déjeuner sur l'herbe for illustrator René Bouché; a month later, Dick Rutledge photographed her as a giggling debutante, her springy blonde curls cloaked by a lace parasol; and at the start of September, she posed in a sweeping Balenciaga coat, suddenly serious for Irving Penn. For models nowadays (unless you’re a Kardashian, or a Hadid) that level of newsstand exposure is practically unheard of. And where it does happen, it signals the arrival of a star. But Joan Pedersen’s story got lost somewhere between then and now, squeezed out of history by the glamorous goddesses who’d gone before her in the Thirties — and the sharply elegant midcentury ice-queens who followed in her wake.

Born in New Jersey in 1924, Pedersen was the daughter of a Norwegian chauffeur, who’d immigrated to the US as a teenager, and married a Swedish girl. As a child, she fell in love with dancing, and won a scholarship to study at a Manhattan ballet school. But by her mid-teens, she had rocketed up to 5’ 8” in height, and had to leave those dreams behind; instead, she registered with Harry Conover, one of New York’s most powerful model agencies, and found steady work in the city’s showrooms. One of her most regular clients was Mainbocher — at the time considered perhaps the supreme American designer. She got her first Vogue booking wearing one of his outfits, switched to the Ford Agency, and quickly became a photographers’ favourite. As well as Rutledge and Penn, she worked with the likes of Halsmann, Leen, Horst, and Avedon, appearing in LIFE, Vogue and Bazaar. (“Oh, Dick was SUCH fun!”, she sighs, remembering sittings where the young photographer would keep her amused by singing the latest Broadway hits.) And she was taken to Paris by Serge Balkin to photograph the couture collections in 1947 — another accolade that few of her contemporaries would ever achieve.

In parallel with her modelling career, Pedersen had continued to dance whenever she could. She appeared in the chorus of The Boys from Boise, the first-ever televised musical, and toured Europe in the last months of the war with the USO’s Copacacana Revue. But like most women of her time, Pedersen also dreamt of marriage. “What girl doesn’t?” she told a reporter in 1948. “When I see the guy I want I’ll know it — and he’ll know it too.” Not long after, Pedersen finally spotted the guy she wanted; she married him a year later, but within a few months had figured out that he wasn’t her Prince Charming after all. Pregnant, she returned to her parents in New Jersey, and settled back to work. She continued to book regular photographic assignments, but her dance background made her a natural choice for runway shows — a lucrative (and steady) alternative, in an era when the American public’s appetite for fashion was on the rise. Magazines like Bazaar and Vogue might have been headquartered in New York, but much of their revenue was made by keeping advertisers and subscribers in every state sweet. Many editors and models spent much of their time on the road, giving talks and hosting fashion shows at regional department stores and hotels. So whilst Barbara Mullen (one of her closest friends) stayed moored in Manhattan, Pedersen worked her way around the nation, bringing the clothes readers glimpsed in magazine pages to life. And through one of those shows, in California, she met her second husband, and danced off the scene with barely a backward glance; a happy ending — even if slightly belated — after all.