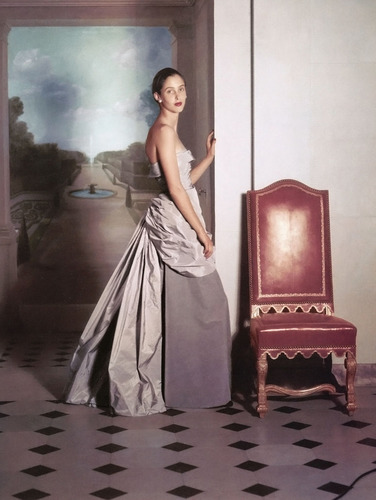 Barbara Mullen chose a modelling career; Jeanne Florin tried to avoid it. But despite that, she became one of the most sought-after models in Paris — and, with her husband William Klein, would form one of photography’s most enduring partnerships.

It’s one of fashion’s great love stories. It even comes with a beginning straight out of an MGM musical; a handsome young American soldier, cycling through grey postwar Paris, sees a beautiful French girl. He stops, and asks for directions; they meet the next day, marry the next year, and live happily ever after. William Klein was a radio operator from Brooklyn, who’d come to Paris to enrol at the Ecole des Beaux-Arts; Jeanne Florin was half-French, half-Flemish, from a strict, vaguely aristocratic family of Catholics. When they met, she’d been studying Russian and sculpture — but they quickly became a single force, collaborating on photography, painting and film-making for almost six decades.

The city that acted as backdrop to William and Jeanne’s love affair was still devastated by the Occupation and its aftermath. But its fashion industry was coming back to life, aided by the American editors and buyers who remembered pre-war Paris — and who viewed its bomb-scarred streets and boarded-up frontages through a mist of rose-tinted nostalgia. And with them came a swarm of magazine photographers, hungry for new faces. “My wife was incredibly beautiful,” Klein remembers, “and people would stop her on the street. They would say, ‘Why don’t you go to Vogue and do photographs?’ And she was from this semi-aristocratic family and she thought that was very vulgar, and being a model was not something she thought was cool.” Jeanne wasn’t alone in thinking the opportunity wasn’t ‘cool’; in America, it was fast becoming a glamorous (and lucrative) career, but for most French women modelling was still a far from respectable way to earn a living. Klein was struggling to survive on his painting, though, so Jeanne gave in to the inevitable. She became a regular supporting player in the big international magazines, her pale skin, austerely-parted hair and heavy-lidded eyes adding a hint of exotic Parisian elegance to their couture reports. Clifford Coffin shot her alongside Fiona Campbell-Walter for Vogue in 1948, her slender frame rising out of a grey Balenciaga velvet and silk gown; the following spring, Lillian Bassman used her in Harper's Bazaar, lurking in the shadows behind Barbara Mullen; in 1951, Henry Clarke paired her with the blonde Nina de Voogt for Vogue Paris, and in 1952 she returned to Bazaar for Karen Radkai. In between, she worked regularly for Robert Doisneau, Georges Saad, the Seeberger Fréres and Philippe Pottier — and once with Richard Avedon, who offered her and William $500 for a shot of the two of them kissing in front of Sacré Coeur.

The camera adored Jeanne Klein’s languid lines and delicate features. But Jeanne never loved it back. When Klein began to achieve success as a photographer in the mid fifties, she happily retired . She made a single appearance on screen, with William, as a couple from the future in Chris Marker’s seminal sci-fi film La Jetée. She raised their son, Pierre (now a film-maker himself). And she painted, for pleasure. But that’s all what we know, mainly because of what Klein himself has said. Janine Klein was publicly silent for most of her life. We know only that she admired Coffin (“He was the only photographer who wasn't pretentious,” she wrote to his biographer, “and certainly never ' difficult’.” ) She acted as costume designer on two Klein’s films, parodying the high-fashion world she’d been a reluctant part of in Qui êtes-vous, Polly Maggoo? and embracing all-out Pop Art kitsch in Mr. Freedom. It’s perhaps only through these that the woman Klein called ‘ma complice, ma conspiratrice’ is visible — a woman who, in their family pictures, is always animated and laughing, her hair cropped short or slicked into a no-nonsense bun. But whenever Klein mentions her in interviews, she reverts to being the fairytale apparition he met in Forties Paris. The year after he died, in an interview with Paris Match, he sighed “Tout ce que j’ai enterpris, je l’ai fait pour elle.”;“Everything I did, I did for her.”