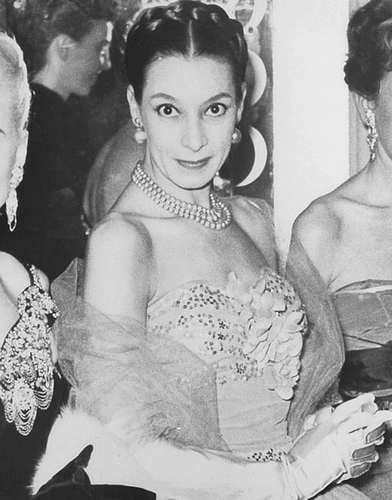 Barbara Mullen spent two years as a department store mannequin before getting her first break at Vogue. But some women would spend their entire careers working in ready-to-wear showrooms and couture salons — none more famously than Hartnell model Dolores, who reigned over London’s fashion scene for two decades.

She wasn’t Norman Hartnell’s first Dolores. That honour fell to Norine Schofield, who’d picked the name herself, and was already a famous artist’s model by the time she walked in the designer’s first show. And on the other side of the Atlantic, there was another Dolores — aka Kathleen Rose, another Londoner who’d become a global sensation as the star of the  Ziegfeld Follies. But Dorothy Stephenson of Bromley didn’t have a choice. When she came to meet Hartnell at his Bruton Street atelier in the mid-thirties, she told him her name. “He winced,” she later remembered, “and said. 'Right, you can start on Monday. And from now on your name is Dolores.'.”

Stephenson had studied art as a teenager, but came to realise that she would never excel in the field, and enrolled herself at a modelling school instead. She struggled to find work initially, and was sacked from her first job. But at Hartnell’s she found a lasting home, her exotic looks adding drama to his demurely feminine designs. And the name change was nothing unusual, in an era when couturiers rechristened their house models as a matter of course; Gigi, Bettina, Praline. “It’s a hard name to live up to.” was Stephenson's only complaint. “People expect extra polish.”

During the war, she put her art training to good use by working as a factory draughtsman, but returned to Hartnell afterwards. “She’s always been decorative and hard working.” he said approvingly of his long-serving employee. “Dolores takes delight in arriving every morning looking almost frightening without a speck of make-up, to emerge at 10 o’clock in full rig . . . her funny face becomes heavy with cosmetics, and the wisps of black hair have been augmented by a strapping plait and a hefty bun of jet-black hair which I bought for her at some expense.” Stephenson, on the other hand, put her success down to “enthusiasm, and a pair of very sound feet. It’s not by any means an easy life. You don’t merely put on a dress and walk around. You must have dramatic talent. Your personality must capture attention, not for yourself but for the clothes you are wearing.”

After the war, Stephenson became Hartnell’s de facto ambassador — travelling the world to show off his clothes, doing TV appearances, judging regional beauty contests and opening boutiques on his behalf. she also wrote beauty and style columns, and gave regular interviews on the world of fashion. “I’ve seen dozens of trends come and go,” she told one interviewer sagely. “and I am quite convinced there is no more accurate barometer of world condition than women’s clothes. “There has never been anyone quite like Dolores for interpreting the Hartnell story,” The Observer’s Alison Adburgham wrote in the Fifties, “while yet bringing warmth and human kindliness to what so often appears superficially an aloof, unkindly calling.”

In newspapers, Stephenson was universally proclaimed ageless. But she was always more clear-eyed; “Your days at this game are numbered. What comes after that? For myself, I’m too scraggy to start modelling middle-aged styles.” Finally, in December 1955, by then in her mid-forties, she retired and emigrated to South Africa. It seemed an abrupt move for a woman whose whole life had revolved round Hartnell and his work — a woman who’d never married, and never moved out of the family home; who’d lived frugally, always making her own clothes, and spending her lunch breaks bargain shopping. (Years later, rumours hinted that she’d become infuriated at the arrival of a new favourite, Cynthia Oberholzer. “If she stays, I go”. Stephenson allegedly raged.)

But that was all behind closed doors. On her final day, she simply said; “I will stroke every wall and kiss every door goodbye.” She took one last bow, in a bright-yellow ballgown, at another royal show in Hamilton House. “We are all going to miss you very much.” the Queen Mother confided as they said their goodbyes. “It’s been a long time, hasn’t it?”