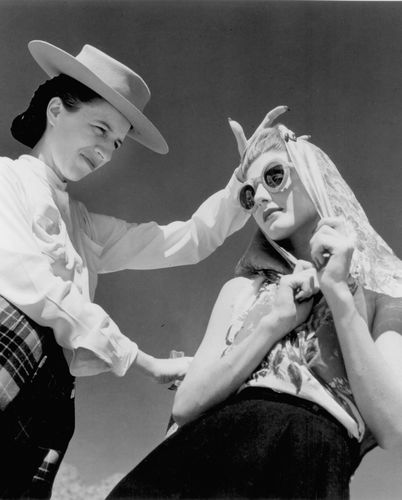 You can’t have a good Cinderella story without having an ugly sister somewhere in the frame. In Barbara Mullen’s particular fairytale, that role falls to Bijou Barrington — a glamour girl whose career contrasts with that of Mullen in almost every significant way.

Of course, in reality Bijou Barrington wasn’t remotely ugly. Like most models of the early Forties, she was uncomplicatedly, film-star-perfect gorgeous; a poised, tanned, elegant blonde with a dazzling toothpaste smile. From 1939 onwards, she was one of Manhattan’s most in-demand names, working regularly with the likes of Horst, John Rawlings and Louise Dahl-Wolfe. In 1944, a youngster called Dick Avedon splashed his entire army discharge to book Barrington (then the city's highest paid model) for a session; he sold the pictures that resulted to Bonwit Teller, and within a few years had risen to the top of his field.

Although born only a few years apart, Barrington and Mullen inhabited entirely different worlds. Mullen spent her childhood in Depression-era Harlem, whilst Barrington travelled the world with her concert pianist mother; Mullen left high school to work in a local beauty parlour, whilst Barrington won a studio contract with RKO. (Born Erica Barrington, the studio rechristened her Diane, before model agent John Robert Powers rebranded her as Bijou, to join a stable which included pin-up stars like Chilli Williams, Jinx Falkenberg and Choo Choo Johnson.) And where Mullen was largely unknown during her long career, Barrington was a gossip column darling; a room-mate of the equally infamous Dorian Leigh, with whom she challenged the reigning agency system by setting up a model agency of their own. Her hectic love life (married three times in one decade, twice to the same man) was played out in Manhattan’s starriest nightclubs — and every twist and turn was breathlessly reported on by gossip columnists like Walter Winchell, Cholly Knickerbocker and Dorothy Kilgallen.

But in 1947 (in a somewhat less reported twist), just as her career was at its zenith, Barrington was replaced on a Vogue shoot by a novice. It wasn’t her fault; designer Mark Mooring had been working with Barbara Mullen for almost two years, and cut all his gowns to fit her like a glove. But Mullen was a new kind of shape; beanpole-tall, and impossibly slim — even by model standards. Barrington simply couldn't get the dress on. Normally, editors would have improvised their way out of the problem, pulling garments together with clips and pins. The particular gown Vogue had called in, however, had to be photographed from the back to show off its detail. So Barrington was cancelled, and Mullen was hunted down in the staff quarters Bergdorf Goodman to take her place. It's not quite All About Eve, but her debut feels in retrospect it like a changing of the guard; Barrington's soft curves giving way to hard angles, and glamour being dropped for a more extreme aesthetic that Vogue trumpeted as ‘The New Beauty’.

And that was that. With the year, Mullen was one of the modelling world’s new stars, while Barrington faded into the background. The tail-end of her career (still faithfully followed by the newspapers) dogged by divorce, illness and accidents; the studio contracts never amounted to more than the occasional walk-on, and her death in the early Sixties passed unremarked. Bijou Barrington's name is largely forgotten now, apart from her part in triggering Barbara Mullen's career. Her only crime was that of having incarnated her era so perfectly — an era, unlike Mullen's, which feels utterly removed from today.