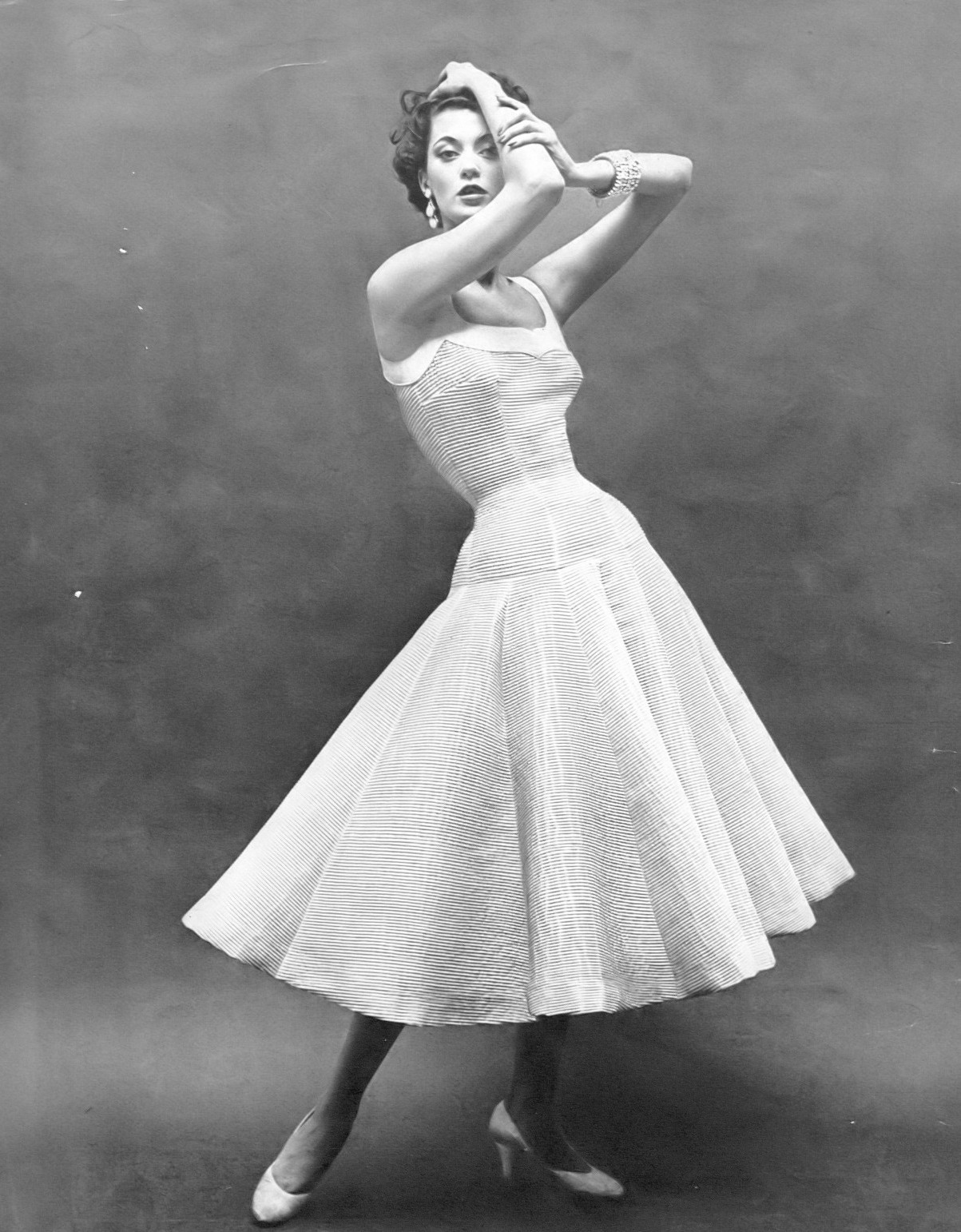 Barbara Mullen in a Mollie Parnis advertisement, photographed in New York in 1953.

"John, my mom says that woman was not a top model."

The message popped up on my phone screen, early one morning in the summer of 2014. I’d gotten used to these small-hours emails, in the months since I’d started to research a Fifties fashion model called Barbara Mullen. Time zone gaps between Britain and the US meant a steady rota of late night electronic and phone conversations as I tracked down her surviving contemporaries, from photographers such as Bill Helburn and Melvin Sokolsky to models Joan Pederson and Lucinda Hollingsworth. Some, like Pedersen, remembered Mullen with an affection that had survived continents of distance and decades without contact; “For someone to have had so much heartbreak, so young,” she sighed when we spoke. “It was so sad.” Some recalled her with only the vaguest of familiarity:“Oh, she’s VERY beautiful,isn’t she?” Mullen’s British contemporary Jean Dawnay said appraisingly, squinting at pictures with her fading eyesight on a summer afternoon in Eaton Square. And a few, like Frank Horvat, the photographer who shot one of Mullen’s final covers in 1959, confessed that they simply didn’t remember her at all.

But Horvat was the exception. And everyone that remembered Barbara Mullen seemed to have an opinion about her. That was how I’d heard of her in the first place, after all, skimming an interview William Klein had done with the Financial Times in 2012. "My favourite model was Barbara Mullen,” he told reporter Liz Jobey. “She was a tough, Irish-American living in Brooklyn and she had a foul mouth, she was not at all [well bred].” Francesco Scavullo swore they’d had an affair; “I was very much in love with her. We were going to get married.” Bill Helburn, one of New York’s busiest commercial photographers, remembers an elegant woman who moved like a dancer; "She was just outstanding,” he declared, “as good a model as there was — every bit as good as Shrimpton or Twiggy. EVERY BIT. And she always nailed it." Jessica Daves, American Vogue’s editor for much of the fifties, called Mullen “one of the queens of the modelling kingdom.” And Carmel Snow, the legendary editor of Harper’s Bazaar, was less of a fan; “You think you’re a beauty, Barbara,” photographer Lillian Bassman remembered her telling Mullen, “but you’re really only a big, ugly Irish girl.” (Though that didn’t stop didn’t stop Snow putting Mullen on the cover of Bazaar four times in as many years).

Bassman herself was responsible for several memorable tributes to Mullen — most pivoting around their first, unpromising meeting on Christmas Eve 1948, when Mullen was sent to her studio in place of another model. “The replacement girl walked in.” Bassman remembered. “I said to the editor, 'This girl is a monster.' Then I turned on the lights and saw this girl just bloom like a flower.” It was the start of an extraordinary working relationship between photographer and model; one of many such relationships that Mullen inspired, each with their own distinctive dynamic. At first sight, she may have seemed unpromising to Bassman — but in the now-legendary pictures they took together in the attics and parks of Paris, she transformed into an ethereal swan princess. In Richard Avedon’s Manhattan studio, she could be knowingly sophisticated, her slicked-back hair and pouting lips incarnating postwar fashion’s liberated new woman. For Norman Parkinson, shot against spectacular Indian backdrops, she could be evocatively exotic. And for Klein, piled high with furs and lavish jewels, she could be a clown, gleefully mocking her own image of elegant sophistication. In an era when most models were memorably recognisable, she was unique; a replacement girl, who could mould herself into whatever photographers and editors desired.

It’s not surprising that photographers always seemed to have something to say about Barbara. But as I reached out, one by one, to Mullen’s few surviving model contemporaries, I was largely met with silence. Some had moved on, and had no particular interest in revisiting ancient history. Some could only vaguely remember their own careers, let alone someone they hadn’t thought of in decades. Some didn’t want to be drawn into conversations about a woman whose affair with Jerry Ford, the married boss of her model agency, had ended her American career. And one got her son to email me and say "My mom says that woman was not a top model."

Not an "I don’t remember her," or an honest "I didn’t like her," or even an "I don’t want to talk about it." It shocked me. And it made me wonder whether, in my desire to uncover a story, I’d used Mullen as a replacement girl myself. Had she just been the right body, in the right place, at the right time — someone who’d happened on a run of good luck, and had fluked or been manipulated into striking the right pose for a string of photographic geniuses? But then, everything else I read or saw about Barbara Mullen suggested the opposite. This was a woman who appeared on a host of international magazine covers, in a working life that stretched from from 1947 to 1959 (in addition to those 4 Bazaars there were 4 of American Vogue, 3 British Vogue, 2 French Vogue, 8 Elle and countless other one-offs); a woman who’d partied with Dior, modelled with Audrey Hepburn and Marilyn Monroe, and waltzed between high-fashion editorials, couture runways and mass market ad campaigns with ease; who, after she’d fled New York, had embarked on a whole new career in Europe, inspiring a new generation of image-makers from William Klein to Guy Bourdin to Peter Knapp.

Mullen also outlasted most of her contemporaries, taking her final runway turn at Ungaro’s first fashion show in 1965; by then, she’d gone on to open a pioneering fashion boutique in the Swiss resort of Klosters, stocking labels like Kenzo and Sonia Rykiel when they were just getting off the ground, and building a client list that ranged from Deborah Kerr to Princess Margaret. And from the scattered souvenirs she’s kept from her former life, there are plenty of testimonials to the esteem in which she was held. Fifty years after they worked together, Avedon sent Mullen an invitation to his big New York retrospective, across which he’d scrawled with the words "Barbara. This is an order! You must be at our opening at the Met Museum. Dick." There’s are other invites in her archive too — from Klein, from George Platt Lynes, this time from Lillian Bassman, and this time with a shorter, simpler message; "To Barbara. The Best of the Best."

When we talk about it, Barbara Mullen is self-deprecating about her past life. “No-one knew our names.” she laughs. “No-one whistled at us on the street. We weren't anything special. But we were young, and we were thin, and we were DAMN lucky." But I believe, like Bassman, that Mullen was the best of the best. And it seems only right, at last, that the replacement girl should get to tell her own story.