A dark Renaissance thriller exposing one of history's most depraved secrets

I have been researching recipes to be able to offer some unusual ideas for the menu pledges, and although it’s been making me permanently ravenous, I have been really enjoying reading the Revolutionary Chinese Cookbook, by Fuschia Dunlop which introduces some really bold spicy dishes from Hunan, the home province of Chairman Mao.  Any recipe called numbing-and-hot chicken certainly gets my vote.

But it was whilst watching last week’s wonderful episode of the Story of China presented by Michael Wood  on BBC2,  that his descriptions of the Cultural Revolution reminded me of an invitation I received from the Li Family to share a special lunch with them in their restaurant in Beijing.  As the restaurant requires a minimum of four days notice, due to the length of time many of its recipes need, it was a real privilege to be asked.

Located on a quiet road in a nondescript hutong in Zhongnanhai, the restaurant is the only one in China to serve orthodox Qing dynasty recipes dating back hundreds of years. These recipes were initially handed down by Li Zijia who was the Chancellor Prime Minister of the Imperial Household and responsible for the management of the palace kitchen. He audited the menus and consulted the royal physicians to ensure that all the ingredients were auspicious.  It was not unusual for Empress Ci Xi to demand that the kitchen prepare 300 exquisite dishes for dinner, of which she might sample four or five of the most pleasing to the eye. She might also demand the execution of any chef who displeased her. So no pressure there then. 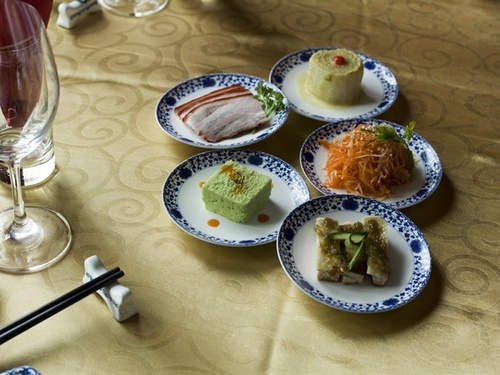 One of Empress Ci Xi’s favourite dishes was jade tofu which had to be the exact shade of green of her favourite jade pieces, and the frogspawn she preferred came only from one species which lived in a lake in a province far away from Beijing. The jade tofu was incredibly light and delicate but I nobly donated my  entire dish of steamed snow frogspawn oil in egg custard, to another of the guests.

The original recipes were only saved from the nightmare upheavals of the Cultural Revolution  by Li Shanlin, the grandson of Li Zijia who managed to memorise 300 of them before they were destroyed by the Red Guards. They remained secret until 1984 when the family, who had suffered terribly because of their associations with the royal family, decided to open a one table restaurant in their tiny flat. Li Shanlin’s daughter went on to win the National Banquet Competition bringing the reputation of the Li Imperial Cuisine to a much wider audience. In fact Pujie, the younger brother of Puyi, the last emperor, was so impressed after eating there, that he picked up his calligraphy brush and wrote a poem describing how the food transported him back to the Forbidden Palace. This priceless artefact is proudly on display in the restaurant.

There is still great mystique surrounding the recipes. They are only ever passed down to the oldest child of each generation, and even the chefs who work for them are never told the precise weights of ingredients, nor the specific  yin and yang balancing of the sauces. They must be the rarest dishes in the world featuring some of the most exotic ingredients, so unless Sainsbury’s suddenly start selling snow frogspawn, it’s back to the drawing board for pledge recipes…

Five authentic Mantuan recipes and five authentic recipes which come from different regions of China (PDF format), ebook edition and your name in list of Super Patrons in the front of the ebook