If you've watched the funding video or read some of the information on the site you may be familiar with the idea of the "4Ps": Principles, Power, Perspective and People. Well; the 4Ps have now gone. They are not in the book - although they kind of are. The philosophy of four big important areas remains but this way of referring to them doesn't appear.

So why is this? And what has replaced the 4Ps?

Well, One of the things I realised as I started to talk to more and more people about the model that underlies the book was that four of anything with the same letter is difficult to remember. A catchy headline, yes but an easy thing to remember, no. I might know what the Ps are; others might not.

This change had nothing to do with the unimpressed missive I got from a senior marketing contact saying he wouldn't support the book because I'd nicked the 4Ps of marketing - Product, Price, Place, Promotion. Except that maybe it had... Talking to marketing people helped me realise that though many could remember two or three Ps they often wrestled with the third or fourth. Can you remember the difference between four things that are all the same? It reminds me of that weird but oddly compelling joke: "What's the difference between a Duck?  ...One of its legs is both the same."

So, RIP the 4Ps. You were great but times have moved on. That is also enough about Ps lest it gets all Donald Trumpish - that thing of not liking him but ending up talking about him and not the other guys (and yes, it is only guys on that platform...). On that topic (villains and why they persist, not Trump) you might like this post. As I said, RIP Ps. 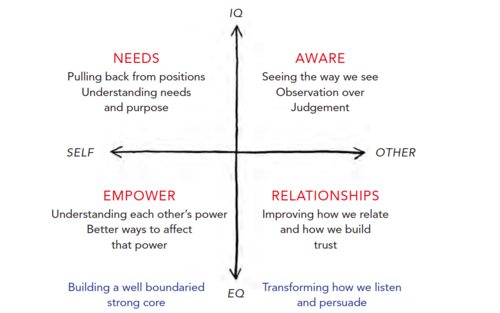 The book deals with these four areas in detail - each has a chapter to itself and Strong Core and the Soft Front each have a consolidating chapter.

I'm still looking for other stuff that matters in life's great negotiation that doesn't fit into one of these so if you hold the gem of insight that breaks the model I am all ears. I want to break it if it can be broken.

Did you hear the joke about the US Professor who was lecturing his class of young students on language, authoritively telling them that there were many languages where a double negative could mean a positive? He went on to explain that, this being so, there were no lanuages in which a double positive could mean a negative. At this point a quiet English voice spoke up from the back of the class and said quietly: "Yeah...  Right..."

Meanwhile I hope those special editions have now well arrived.

As you read I'm interested to get your thoughts @hilarygallo #powerofsoft

Latest news on book sales is a spotting at WHSmith in Liverpool Street - No 3 in their Business Books chart. Also Waterstones in Picadilly has a nice big pile of soft. If you see the book out there or can do something to promote it please do! Amazon sales are building and reviews are starting to come in. The soft train is on its way...