An essential addition to the intersectional feminism discourse, centred on gendered Islamophobia.

Liberation politics: Beneath the veil

The way Muslim women dress has always been a source of debate and judgement and their clothing has become increasingly politicised over the years. A veiled Muslim woman is seen as oppressed and silenced. That’s before she’s even uttered a word. The hijab (a head covering) and the niqab (a head and face covering) bring with them a multitude of racist and Islamophobic stereotypes. She is submissive. She is uneducated. She does not speak English. These are stereotypes that we have seen all too often in how the media represents Muslim women, both in fiction and non-fiction formats. Homeland, an award-winning TV show, has been widely criticised as being ridden with Islamophobia tropes, particularly with how Muslim women are depicted.

In Reel Bad Arabs, the author Jack Shaheen researched media representations of Arabs, and in his research discovered three main characteristics or stereotypes for Arab women. Two of these stereotypes are also fitting when it comes to looking at representation of Muslim women in general. The first stereotype Shaheen found was that of the ‘oppressed wife’. She is completely covered, silent, obeys her husband, and does not leave the home unless with her husband. The second stereotype is the ‘oversexualised harem maiden’, which does not always refer to religion or faith but can still sometimes be used to stereotype some Muslim women. And the third and last stereotype is that of the ‘female terrorist’. She is the opposite of the oppressed wife in that she has a voice and free will, but this is used for religious fanaticism, violence, and terrorism against the West.

In Homeland, we saw regular depictions of Muslim women as the oppressed wife or the female terrorist. In the first season, which first aired in October 2011, there is a scene where the protagonist (a CIA agent named Carrie) is speaking to an Imam, when he tells his fully covered and silent wife to wait upstairs while he speaks to Carrie. Without a word, she leaves the scene, and only returns later to let Carrie out of their home, where again she does not speak a word. This is entirely typical of how many people view Muslim women, which these stereotypes only serve to reinforce even further.

And if Muslim women are not oppressed and silent then they are complicit and violent in terrorism, which is exactly what viewers saw in the hit BBC TV show, The Bodyguard. Nearly a decade after Homeland first aired on TV, The Bodyguard hit our screens in August 2018, and it seems very little has really changed when it comes to Muslim representation. From the onset, we see a hijab-wearing woman, Nadia, hiding in the toilet of a train about to set off a bomb, fulfilling the female terrorist stereotype. The use of the hijab is key here, as it instantly tells the audience all they need to know about what’s about to happen, i.e a terrorist plot, due to how intrinsically connected Islam and terrorism now are in people’s minds. After the protagonist - David Budd - attempts to talk Nadia out of setting off the bomb, it quickly becomes clear that she is actually the victim who needs saving, and the stereotype evolves into that of the oppressed wife. The audience then finds out in the final episode of the show that Nadia is in fact the terrorist mastermind behind the whole operation - a move back to the female terrorist stereotype that is not empowering or radical. It is simply switching between two Islamophobic and racist stereotypes.

The common thread in the Islamophobic tropes used to represent Muslim women is that the woman is almost always wearing visible Islamic clothing, whether that is a hijab or the full covering of the niqab. She is instantly identifiable as different, the alien Other. But it is a double-edged sword, as the hijab is not only used to signify otherness, but also as a method to signal assimilation into the rules of Western society and move closer to whiteness through its removal. The removal of the hijab has been used as a plotline in many media depictions of Muslim women, but a prominent example is Netflix’s drama series Elité. The TV show includes a Muslim student, Nadia, who must grapple with feeling like an outsider at her private school, both as a hijab-wearing girl and as a scholarship student. She is portrayed as quiet and timid, until her school demands she remove her hijab. Even though Nadia chose to remove her hijab, the moment she stops wearing it is distinguished as a moment of liberation and ‘freedom’ in Elité. She begins to rebel against her ‘oppressive’ parents and religion, and without her hijab, quickly captures the romantic attention of a boy as she is now seen as more Westernised and closer to whiteness, and so more worthy of attention.

The image and story of Elité’s Nadia, and all these other stereotypes I have explored, are pushed to the forefront by white feminists. Theirs is a feminism that is more focused on ‘taking to the streets to chant “free the nipple” with your tits out, revealing your hairy, unshaven armpits to raise banners of cartoon vaginas with “pussy power” scrawled at the bottom, whilst simultaneously viewing any form of covering as “oppressive”.’ And so, a veiled Muslim woman doesn’t fit into what white feminism views as a ‘liberated’ and ‘modern’ woman. The wearing of the hijab or the niqab is not seen by them as an active choice made by a Muslim woman, but as a choice made for her through being forced to cover up, either by religion or by the men in their lives. She is always the victim.

In fact, white feminists tend to see Muslim women as being in direct opposition to their values, with a lot of their thinking around the inherent patriarchal nature of Islam based in how Muslim women present themselves. Prime examples of this are the writings of self-proclaimed feminists, Julie Bindel and Julie Burchill. Both have written extensively around Muslim women, and Islam in general, with a lot of their thinking steeped in Islamophobic stereotypes centred on the ‘oppressive’ lives of Muslim women. Bindel penned an article in the Daily Mail titled “Why are my fellow feminists shamefully silent over the tyranny of the veil”, detailing her thoughts on the barbaric and misogynistic tool that is the veil. She is apparently fighting for “the right of women not to be bullied by extremists into anonymised submission and treated as sexless chattels.”

Burchill is no different either. She has written articles bashing Sinéad O’Connor for converting to Islam, the apparent myth of Islamophobia, and the enslavement of veiled Muslim women. In a Times article published in 2006, she is quoted as saying about Muslim women, “they are prisoners, pure and simple; and as the growing rate of Muslim ‘honour’ killings in this country proves, the slightest show of spirit on their part often provokes a violent response from the very men who should be their champions and protectors.” And she goes further to say this about white veiled Muslim women, “when I see a dumb, white bitch convert wearing Islamic dress, I feel massive revulsion and contempt, as they have actually chosen enslavement.” Ironically, Burchill had to pay substantial libel damages to Muslim journalist, Ash Sarkar, after Sarkar brought a case against Burchill for Islamophobic social media comments calling her an ‘Islamist’ and a ‘paedophile worshipper’.

Bindel and Burchill are just two examples of white feminists who have internalised gendered Islamophobia in their views of Muslim women, albeit in their case, an extremely violent and hateful form of Islamophobia. Both see Muslim women as victims of a violent patriarchal religion that has enslaved them to the men in their lives, and effectively left them silenced. But what is the likelihood of these women haven spoken to real Muslim women about their thoughts and feelings on some of the topics that they seem so well versed in that they write regular columns on it? I would hazard a guess at it probably being near zero. What white feminists are instead doing is speaking for Muslim women, by telling them what their life experiences are and how they should feel about them. Muslim women are being silenced by the very people who state they are trying to give them a voice and ‘liberate’ them.

Of course, this is not to say that some women aren’t oppressed through the veil. There are instances where Muslim women are punished for the clothes they wear or for the lack of hijab or niqab. In July 2009, thirteen Sudanese women, including journalist Lubna al-Hussein, were arrested in Khartoum, Sudan for wearing trousers in public. They were charged and convicted of breaching Article 152 of the Sudanese criminal law, which prohibits dressing indecently in public. Most of the women were issued with fines, but Lubna al-Hussein refused to plead guilty or pay a fine, not wanting to give the verdict any kind of legitimacy. Instead, she chose to remain in prison. She was later freed due to international pressure on the Sudanese government. This has been known to happen elsewhere too. In Saudi Arabia, women’s clothing and appearance is governed by a strict interpretation of Islamic law and enforced by the Saudi Commission for the Promotion of Virtue and Prevention of Vice, better known as the religious police. Women who are viewed as exposing too much skin or wearing too much makeup are harassed and intimidated by the religious police. In November 2016, Malak al-Shehri was arrested for tweeting a picture of herself wearing a bright-coloured dress in Riyadh, and more importantly, without a hijab or abaya (a body-length loose robe). She was charged and detained with cyber-crimes and encouraged others to also take a stand against the kingdom’s dress codes. She was released from jail after five days, and the photo was deleted.

However, the key thing to note about these examples are that they are not the universal experience for Muslim women. Not all Muslim women are forced, either by the state or their families, into covering up. And not all Muslim women are punished or condemned when they do cover up. The danger with many of these types of cases is that they are lifted and isolated outside of their contexts and used to ‘prove’ that Islam is a backwards barbaric religion, that Muslim women are oppressed, and that the hijab is the pinnacle of this oppression. And one of the principal offenders of this are white feminists. They take cases like al-Hussein and al-Shehri and they turn them into symbols and irrefutable evidence that Muslim women need saving. And who is it who will be saving them? White feminists, of course.

Attend a virtual one hour journalism masterclass led by Shahed, a freelance writer and journalist specialising in features and reporting on politics, race, culture, and social issues. You’ll have the opportunity to ask Shahed questions at the end of the masterclass.
LIMTIED TO 50. 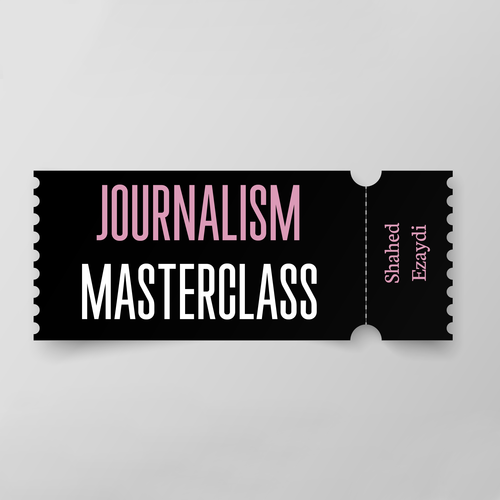