News from Mars and Earth

You may have seen a bright red planet in the night sky this summer. That's Mars, it's been as close to Earth as it has been for many years and it would be perfect time to go there. When it was at it's very closest we got the telescope out and we saw a big red disk with a little lighter area towards to pole, but couldn't make much other detail out otherwise, probably because there's been a massive dust storm enveloping the planet.

This has been terrible news for my friend Jim at NASA, whose amazing rover Opportunity has been knocked out for months. Good luck to him and the team as they try to wake it up.

There's better news though, they have found a large lake of liquid water under the ice of the south pole (the white smudge we saw). As our book explains, liquid water and life go together like gin and tonic or sunshine and happiness, it might just be possible that we aren't alone in the Universe!

It's been a busy summer on the publication, story editing, detailed editing, picture editing, page setting etc and .... we are nearly there!!!! The book cover is being designed and I am eagerly awaiting the final draft of the text and drawings. Talking of which I have been working those up and improving them and here is the BIG ONE to finish the book with! 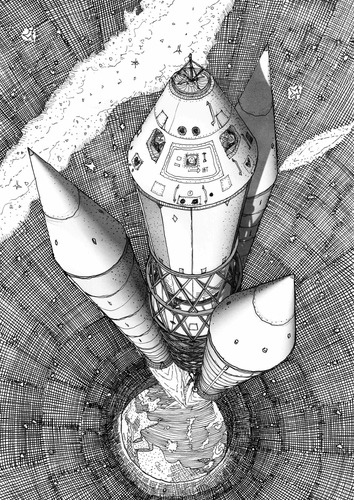 PS - It looks like a December launch so look out for an invite to the party at Morocco Street!!!!