Meet Mo - one of the six children in 'The Other Things' 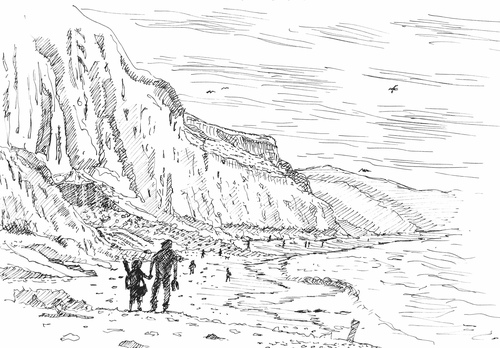 I spent 6 months developing the characters. To give them an authentic voice they need to have their own history and personality.  Much of this might not enter the script, but it's in your mind when writing it.

Each of the children has a significant family member who has taught them the skills needed on an expedition to Mars.

Mo has always been fascinated by his Father's palaentology. Both Mo and Alim originate from Bangladesh, however Mo has lived with his Uncle in London for most of his life, which makes him a fairly typical London Boy.

My eldest boys all went to primary school in the East End and this school, with its high proportion of Bengali kids, became the inspiration for Mo's school and the chapter where Alim inadvertently saves them all from the tsunami that floods London in the wake of the near miss by the asteriod.

Mo's skills are fossil hunting and electronics. This illustration above show Mo and his Dad on the Dorset Jurassic Coast hunting for fossils. Mo's skill with electronics come from making his own short wave radio to communicate with his Alim during his long absences in the field.

The illustrations often need as much imagination as the writing and my sources are often places I've been to or other cultural references. The scene where the Tsunami hits London is a collage of The Great Wave off Kanagawa by Hokusai and a photo I'd taken walking Owen back from school. The stretch of the Jurassic Coast was one of the first places we took Samantha, Luke and Emerald when they joined the family.

We are getting close so if you know anybody who'd join us please share this!

Many Thanks to Shakar, Anthony, Clive, Paul, Stefan, Bruno & Lou, Pipa and Nat for their Pledges this week. 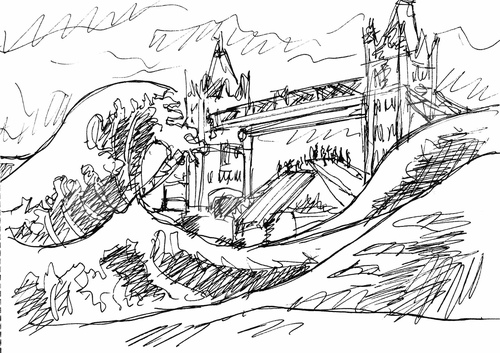