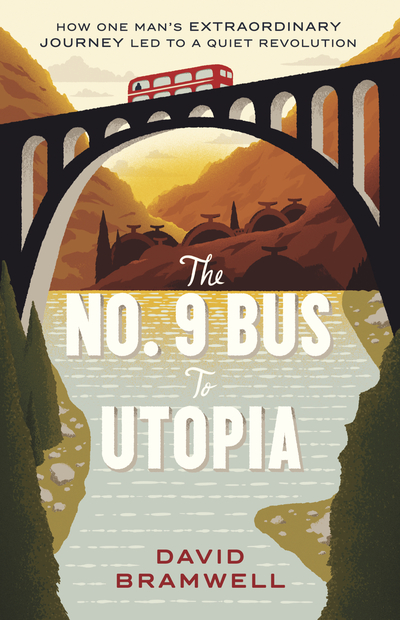 One man's search for truth, beauty and some really funny stories as he visits Utopian communities

'David Bramwell is a true philosopher, great journalist and excellent writer. He has gone where others only imagine trading, and the book is packed with gags, wisdom and pathos. Plus it ends on a high note: paradise begins at home. It actually is a must-read.' – Tom Hodgkinson, The Idler

This book is the record of a quest.

A few years ago I came out of a relationship, heartbroken. I was dumped and replaced by someone my ex described as 'younger but more mature'. Realising I had a thing or two to learn about giving, I took a year off and journeyed through Europe and America seeking out extraordinary communities that could teach me about how to share.

Why?
I had a few questions I wanted to answer. Is modern life rubbish? Why do so many of us feel lonely and unfulfilled despite a high standard of living? Are there communities out there who hold the key to happiness? And if so, why do so many of their inhabitants insist on dressing in tie-dye?

Where?
On my travels I visited an anarchist community in the heart of Copenhagen, had some hair-raising experiences in several free love communities, had an epiphany in a spiritual caravan park in Scotland and thought I'd found paradise in a Californian community dreamed up by Aldous Huxley. Most impressive of all was Damanhur, a 1000-strong science fiction-style community in the Alps with an underground temple the size of St Paul’s Cathedral, a village of tree houses and a ‘fully-functioning time machine'!

What happened?
Inspired by the people and places I visited, I returned home with a desire to change. Not just myself but also my neighbourhood and city. In an attempt to re-connect people in their community I helped set up a unique and hugely successful event in Brighton called 'Zocalo'. Involving no funding or permission, just posters, it gets people outside on the street talking to their neighbours. Some dragged out barbecues, some brought sofas and rugs. One heroic household on Islingword Street set up their entire living room on the pavement, complete with the obligatory stag’s head. This year we’re planning to run it across the whole of Brighton.

With this book, I hope to inspire more people to do the same and revolutionise their cities.