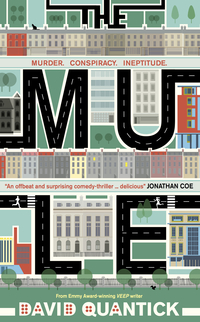 Catchy slogan for The Mule

"The unspeakable in pursuit of the untranslatable."

Well, not so much trailed as extracted. Bad news if you're a tooth, good news if you're a book. Now it's possible to download and read a Sizeable Chunk of The Mule, in which Jacky, the narrator, finds himself in Paris with Euros Frant, the most awful man in the world.

The most useless book in the world is a translation of a children's classic into a dead language. Some examples of this awful academical tweevery include:

Winnie Ille Pu, the Latin version of Winnie The Pooh.

and Harry Potter And The Philosopher's Stone in ancient Greek.

Nobody, as far as I know, has translated…

The Most Annoying Man In The World

What would the most annoying man in the world look like?

And hair in his ears.

(with apologies to Aristide Bruant, who I'm sure wasn't at all annoying).

These Are Photographs Of Me

What if you came across some photographs of someone who had been murdered?

What if the person in those photographs was you?

A PS FOR PLYMOUTH

After yesterday's post, several kind people sent me this link:

A PLAN FOR PLYMOUTH

Some people like lists of words. I don't. I try and avoid books where people are always making lists of pretty words, like chrysostom and peridot.

I tend to avoid your useless beauty. Decoration has its moments, but I can't abid a thee and a thou and a foldesoddingrol.

I do however like a map. Any kind, from a world map to a treasure map to a city plan.

And the greatest city plan of all…

#askquantick: 140 Characters In Search Of An Author

Tomorrow I am a Q and A, from 2pm. Please ask me any questions, about writing, or comedy, or anything (almost anything) and I'll do my best to answer. Thanks!

They say you should write about what you know. I've never been a translator, so I decided to write a book about a translator. Which became The Mule.

Which is not true at all. I decided to write a book written in translatorese, the odd dialect of written English in which British and American slang from different decades clash together like verbal armies in the night. Where men can be "blokes" one…

Bet you don't get this with Martin Amis

Sometimes you find yourself on a sunny Monday afternoon consumed with the desire to hear Purple People Eater by Barry Cryer: https://www.youtube.com/watch?v=Xow0P24FUgA

By complete accident, I wrote a monologue for Doctor Who dissing Star Wars. Well, in a way.

Warning: contains The Thick of It. And swearing. So much swearing.

Sometimes I make videos. None of them are very literary but here's one of New Order and Philip Larkin. I filmed Alan Bennett myself on a top of the range 2004 mobile phone camera.

Welcome to my shed. It is of course a virtual shed.

Roald Dahl wrote in a real shed. I've got a lawnmower in mine.

Cyril Connolly or someone famously wrote about the writer's enemy being "the pram in the hall." I think what he actually meant was "the lawnmower in the shed."

Thanks for everyone currently supporting The Mule. The next post will be more about the book and less about the shed…

Name a Dog / Sold out

Name a Character / Sold out