Years ago, when I first moved to Glasgow, I had a flat near the Trongate, in the city centre. It was a poky wee place but it had a big cupboard that I could call a library, so I was happy. I was trying to convince everyone that I could be a writer and ended up joining a writer's group that used to meet in the Tron Theatre. Just along the road from that was a building that I instantly fell in love with - the Britannia Panopticon. Here's a picture of the building as it was: 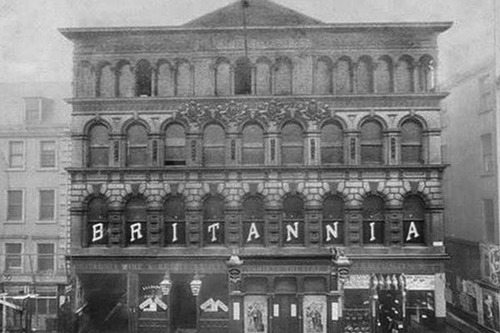 You can read entire books about the place, but it's essentially a very old and very well-preserved music hall. Incidentally, you can visit the website and donate to support the renovation of it.

I became obsessed with the stories of its past, and in particular the life of its owner, a guy called A. E. Pickard. Pickard was a wonderful eccentric, and I ended up reading so much about the guy that I had to write a story about him. It's never been published anywhere, partly because of its length, partly because of the format, and partly (probably) because it's not the best piece of writing.

But I loved writing this story. I was in the midst of reading The Flashman Papers by the great George MacDonald Fraser, and I leaned heavily on the 'false memoir' concept. I pretended that I was merely an editor, an archivist, and used historical footnotes to lend the story credence. As though it was a real document found under the floorboards of the music hall, dropped there by a performer decades ago.

1st edition paperback, eBook edition and your name in the back of the book.
Choose this reward
£20  + shipping
82 pledges

1st edition paperback, eBook edition and your name in the list of Super Patrons in the front of the book.
Choose this reward