I hope you're all doing well. I've got a week off school and I'll be spending a lot of this time working on the manuscript for THE MASH HOUSE. The crowdfunding picked up brilliant momentum through September, but October has been a little quiet. And just as we're so close to the two-thirds mark. Please, if you can, pass on details of the project to anyone who might be interested.

In the mean time, I've hooked up with another Unbound writer. Jason Cobley's book is called A Hundred Years to Arras, and it's a historical novel set during World War 1. I interviewed Jason to find out more about his project:

How much does your novel rely on research and historical fact, and what sort of creative license have you given yourself to fictionalise events?

All I knew going in were the bare bones of Robert Gooding Henson's life: how he was related to me; roughly when he signed up; his movements with the Somerset Light Infantry; and where he ended up in 1917. There seemed to be one or two inconsistencies, which were intriguing, and I did a lot of reading about The Great War and the troop movements. It was starting to become just a list of where the Tommies stayed and where they marched to next, so I created some other characters for Robert to interact with. He's essentially the only 'real' person, but the other characters are all either based on other soldiers or are embodiments of some real accounts. I took some humorous anecdotes - and some horrific ones - and spun them out into a narrative that hopefully gives a sense of what it was like to be a young Tommy just trying to get by day by day on the front. I was also interested in the role women played in the Voluntary Aid Detachment, so we have a character named Flora Stuckey who has a parallel story, and she again is based on real accounts but is a fictional character. The final chapters use material that I know happened with Robert's parents in particular, but the rest is probably more about what feels like truth rather than what actually happened. Once I decided to go down that route and be up front that it wasn't a straight biography, it made the whole writing process really liberating.

Can you tell us a little about the structure and style of 100 Year to Arras - what should readers expect when the book is published?

Blimey, how hard is it to talk about your own style? Crikey. Well, I've been told that a section that I shared at an open mic event reminded the audience of Sebastian Faulks. I guess I am going for a literary style, but I come from experience of writing a lot of action and adventure, so it's intended to be fast-moving and follows the central character more or less chronologically from signing up in 1915 in order to avoid the inevitable conscription, through to his arriving at the front line. I've always wanted to write a novel that tackled serious subject matter but from the point of view of someone caught up in events rather than orchestrating them. It's a working-class view of the war, rather than a middle-class one, so maybe there's some Faulks in there, but also a whole load of Iain Banks, Magnus Mills, Jim Crace and even DH Lawrence. Being a Somerset farm boy, our protagonist's link to nature is an important theme, and I did a lot of reading about that. The Tommies essentially lived underground with rats, but even kept rabbits and stray dogs as pets, trying to cultivate little gardens in the trench walls. It's a novel that's as meditative as it is action-packed, as absurd as it is - I hope - moving.

You're around halfway through your crowdfunding campaign. How have you found the experience, and do you have any plans to raise the remainder of the total?

It's been an experience that has changed me in some respects. I've always been a little bit socially awkward and, although I speak confidently to large audiences sometimes as part of my day job, I've never been that good at talking myself up. But I took a deep breath and went for it. Over the years, through having some comics published and being part of that little creative community, I know a few creatives who have gone on to great success, so I was very flattered when so many of them were happy to support the book. Well-known authors such as Mike Carey and John Wagner (he created Judge Dredd) and a couple of rock musicians are nice little badges I metaphorically wear to remind myself it's worth persisting. Some people who I thought would support it didn't, and a great many who I didn't expect support from did - family, friends, colleagues, acquaintances, and complete strangers! I've found it to be slow, and it's a process that makes you constantly doubt yourself. You develop a thicker skin quickly! At this point, I think I've pretty much exhausted my contacts on social media, so I'm looking at other ways to gain interest. I've done a few shopping events and comic conventions where I've been there ready to sign people up, and doing it that way does result in a few pledges so it's worth doing. When you can get people in front of you to talk about it, it helps I think. On 9th November, I've been invited to put up my stall just before and after a performance of a play about Jack Harrison VC, a rugby league player from Hull. A chap called Ian Judson has written the play and is raising funds to have a statue put up of Jack in Hull. As both Jack and Robert Gooding Henson fought at oppsoite ends of what is more or less the same battle in 1917, Ian thought it would be fitting to invite me along - which is very flattering, and we're hoping I'll pick up a few orders there. One way or another, I'm determined to get there by the end of the year, even if I have to raid my own piggy bank a bit! I have 150 supporters at the moment, which I think is good going!

Banished to a tropical island, what would your Desert Island Books be?

Top of the list would be The Road by Cormac McCarthy. I finished reading it on a train, and there are two specific sections that made me gasp out load and involuntarily sob. In public. On a train. Yes, I know. It's so beautifully written but about something so grim. It's a book, above all, about hope, humanity and kindness but also a stark reminder that we're all very close to losing all of that.

I'd also take Fluke by James Herbert. He's an author that found me at the right time - I skipped over Stephen King as a 12 year old and went straight to the more visceral and British James Herbert. Fluke is the one exception in his output, which is a sad-but-funny tale of a man who dies and is reincarnated as a stray dog. It has one of the most perfect final lines in all of literature.

I'll pick a third one. I could do more but we'll be here all night. An Evil Cradling by Brian Keenan is non-fiction and is the account of the Irish academic who was kept as a hostage in horrible conditions for years in the Middle East. He writes in immense detail about what isolation does to a man, both mentally and physically. I reckon that would remind me that I haven't really got anything to complain about if I was stuck on a tropical island!

If budget and location were no issue, what would your ideal book launch party look like?

Y'know, I don't really like parties, and the thought of throwing one fills me with so much stress that I'm aready termbling! However! All I'd really want is for the people who want to come to be able to have a good time, let me say a few words, then leave me alone and get drunk. What I'd like to do is hire a venue - there are some great bars in Kenilworth - lay on some food, drink and live music, and that's it. Ideally, I'd have a series of little launches with signings at bookshops, incduing (fingers crossed) one at one of the museum bookshops in Arras itself! 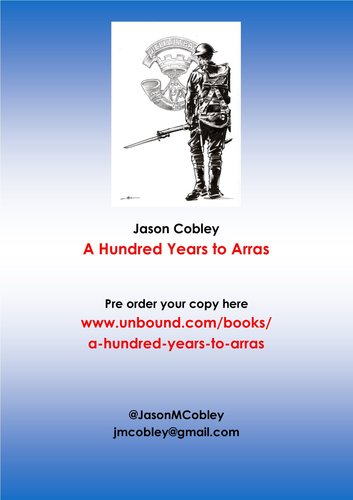 So, if you like the sound of Jason's novel, please visit his page and order a copy. This crowdfunding business is a hard graft, and this sounds like a book worth supporting.