In The Footsteps of Robert Burns

Last month I was talking to my Uncle Allan, a proud son of Ayrshire, about the crowdfunding nature of Unbound books. It can be a tricky thing to explain. The book is not a physical reality, yet we've already sold well over 200 copies to subscribers. We're asking for individual pledges which will combine to fund the whole project. And this reminded Uncle Allan of Robert Burns' early approach to getting work into print. I think this is a good analogy for what we're doing.

Burns was not a wealthy man but his charm and talent gained him a good circle of influential friends. He could not finance a collection of his poetry. So in 1786 he decided to utilise this network to help him fund a new book of poems. In the Ayr Advertiser, he made his plea:

Proposals for Publishing by Subscription, Scottish Poems by Robert Burns

The work to be elegantly printed, in one volume, octavo. Price, stitched, three shillings. As the author has not the most distant mercenary view in publishing, as soon as so many subscribers appear as will defray the necessary expense, the work will be sent to the press.

Burns enjoyed the patronage of Ayrshire's good and great, with individuals ordering not only single copies but stretching their orders 20, 70, and even 145 in one instance. In total, Burns' 350 subscribers pre-ordered 612 copies. The ploughman's Kilmarnock Edition was made a reality. It relied on the goodness and trust of Burns' subscribers and launched his famed career. 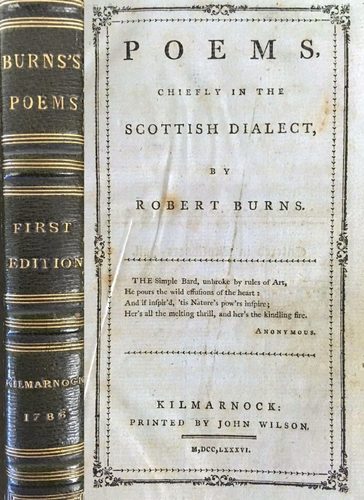 There are parallels between Burns' journey to print and my own. Where he used a local newspaper, I've been spreading the word through twitter and facebook. He had to meet a set funding target, and so do we. His books would be elegantly printed, in octavo (which relates to the folding and size of the pages), and stitched. THE MASH HOUSE will have top-class production qualities, professional design and wide distribution from the Unbound team.

But enough. Any self-respecting Scottish writer can only entertain comparisons to Burns for so long, before coming across as a pure eejit. As, I'm sure, Uncle Allan would be quick to point out.

1st edition paperback, eBook edition and your name in the back of the book.
Choose this reward
£20  + shipping
77 pledges

1st edition paperback, eBook edition and your name in the list of Super Patrons in the front of the book.
Choose this reward