1st edition paperback, eBook edition and your name in the back of the book.
Choose this reward
$30  + shipping
82 pledges

1st edition paperback, eBook edition and your name in the list of Super Patrons in the front of the book.
Choose this reward
$55  + shipping
14 pledges

A one-on-one blether with the author via webcam. Enjoy a dram of whisky, compare tasting notes and ask questions about the book – or anything else. Your whisky not included. Only 5 available.
Choose this reward
$150  + shipping
5 pledges

10 x 1st edition paperbacks, eBook with up to ten names in Super Patrons list in front of book
Choose this reward
$300  + shipping

Choose the name of the Café that features in the novel (in agreement with the author). Plus everything from Super Patron level. (Only one available)
Choose this reward

1st edition paperback, eBook edition and your name in the list of Super Patrons in the front of the book. EARLY BIRD price, only 20 available.
$300  + shipping
1 pledge

Choose the name of the golden retriever that features in the novel (in agreement with the author). Don’t worry – *spoiler alert* - the dog doesn’t die. (Only one available)
$300  + shipping
1 pledge

Choose the name of the priest that features in the novel (in agreement with the author). Plus everything from Super Patron level. (Only one available)

“The cat’s brains were pink and glistening in the glow of the clear high moon. Rivulets of blood puddling on the concrete. Its limbs were folded to the side, and the dead thing’s face looked away from the road, towards the loch.”

Set in the fictional landscape of Cullrothes, in the Scottish Highlands, The Mash House is about simple people antagonising each other to the limits of human endurance. There is Innis, a newcomer who hides a shameful secret and manages the pub; his girlfriend Kirsten, a gorgeous, cheating, lying primary school teacher. And, in the same village, Donald is the aggressive distillery owner, who floods the country with narcotics alongside his single malt; he is haunted by an anonymous American investor intent on purchasing the Cullrothes Distillery using any means necessary.

This is a place where mountains are immense and the loch freezes in winter. A place with only one road in and out. With long storms and furious midges and a terrible phone signal. The police are amateurs, the journalists are scum, and the innocent folk of Cullrothes tangle themselves in a fermenting barrel of suspicion, malice and lies.

In whisky distillation, the mash house is where malted barley is repeatedly steeped in hot water. The intense heat and pressure changes the barley’s complexion. Sugar is drawn from the liquid, and the husks are sold as cattle feed. The villagers of Cullrothes must survive this same transformative process.

The Mash House uses multiple narratives to weave together the parallel lives of individuals in the village. Each fractured by the fears and uncertainty of their own minds. Rural isolation is at the forefront of these concerns. Who can we trust? What are we most scared of? What are we hiding from? Relationships, no matter how damaging or dedicated, sustain each of us.

Infused with love, addiction and free-pouring measures of single malt, The Mash House takes inspiration from the television series Fargo, from Mario Puzo's The Godfather, and from the rich tradition of tartan noir writers. 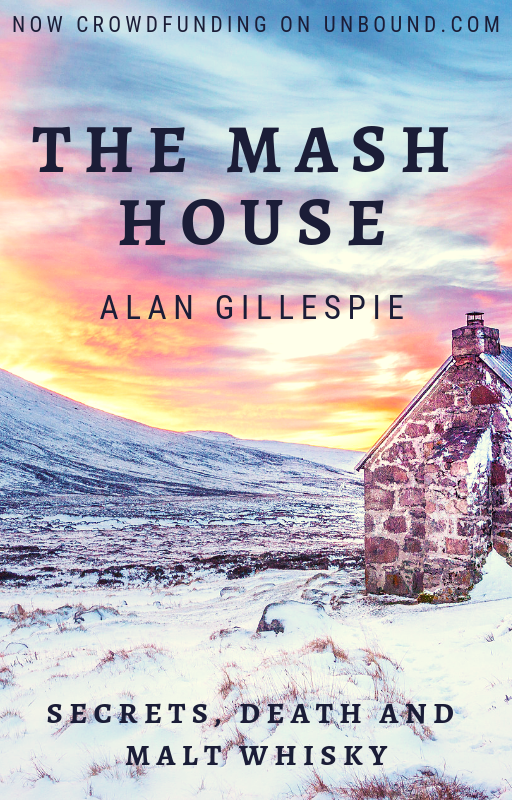 1st edition paperback, eBook edition and your name in the back of the book.
Choose this reward
$30  + shipping
82 pledges

1st edition paperback, eBook edition and your name in the list of Super Patrons in the front of the book.
Choose this reward
View all 10 rewards