Eleven epic stories from the Mabinogion, retold by Welsh writers and beautifully illustrated

The Prince and the King (and the other King)

Pwyll, Prince of Dyfed, gripped the reins of his mare and charged into the forest. He was never happier than when riding and hunting, with the sun on his back and the wind in his face. He laughed and roared as he rode, urging his horse on and on, faster and faster, deeper and deeper into the forest. And the deeper he rode, the thicker the trees became. Before long their twisted and tangled limbs blocked out the sunlight and the air filled with a heavy damp mist. Pwyll could no longer see his hounds in front of him and had to follow by listening to their howling song of the chase.

Pwyll kicked on again, crashing through a thicket of trees and out into a beautiful clearing bathed in warm sunlight. After the darkness of the forest, Pwyll was momentarily blinded and pulled on the reins, stopping his horse. His hounds were standing motionless on the edge of the clearing, as silent as stone.

“What is this? What’s going on?” bellowed Pwyll, angry that his fun had stopped.

But then he saw what his dogs were staring at, and he fell silent too. There, on the other side of the clearing, lying dead among the bluebells, was a beautiful golden stag. And crowding around the fallen beast was a pack of hounds unlike any that Pwyll had ever seen before. Their ears were bright red and their coats so white, so dazzling and bright, that they seemed to shine like stars.

“I wonder who owns these hounds?” he muttered to himself and looked around for the owner of the extraordinary animals.

After a time, and finding no one nearby, Pwyll chased away the white hounds and let his own dogs feast on the stag. But, no sooner had they begun when a hooded rider crashed through the trees into the clearing.

“What do you think you’re doing?” boomed the rider, his voice as deep as thunder.

Pwyll was startled, he was not used to being spoken to like this. He was much more used to people saying things like, “wow, you’re so great, my lord” or “have you done something with your hair, my lord, because it looks amazing” or “HA HA HA, that’s the funniest thing anyone has ever said, my lord”.

“What of it? I have done nothing wrong.”

The hooded rider jumped down off his horse.

“I looked for the owner of the hounds but you were nowhere to be seen,” said Pwyll. “I admit that perhaps I should have waited but it is not so great a crime, is it?”

“Not so great a crime?” shrieked the rider. “Sir, you have stolen from me. Where are you from?”

“Well, sir,” said the rider. “Stealing things may be what happens in Dyfed but you are not in Dyfed anymore. Around here we take a pretty dim view of stealing.”

“I am sorry if I have caused offense, sir,” said Pwyll, although he thought that the strange rider was making way too much of the whole incident. “Please tell me your name so I may make it up to you?”

The rider walked closer and threw back his hood. Pwyll could see lightning flash inside his jade eyes.

“Annwn,” he gasped. “The Otherworld?”

“My Lord,” said Pwyll, who was now a little afraid because he had heard many stories of the dead wandering around the Otherworld. “Tell me, is there something I can do to win your friendship?”

Arawn stared at the Prince and thought.

“Well,” he said, eventually. “There is one thing.”

“Well,” began Arawn. “My neighbour is always fighting me. His name is Hafgan, he is the other King of Annwn and if you could rid me of him then you would truly be a friend.”

“Then lead me to him, right now, and I shall end your troubles.”

“I wish it were so simple,” sighed Arawn. “But there are rules that we must follow. Hafgan and I have arranged to meet a year from tonight, by the river. You will be at that meeting. You will fight in my place.”

Pwyll thrust his sword back in its sheath.

A smile flickered across Arawn’s face.

“But only a king can fight a king. It is the way of things. So you and I must swap appearances. I shall take your body and you shall take mine.”

“How do we do that?” said Pwyll, who had never heard of anyone swapping bodies before. Well, not in Dyfed, anyway. It was the sort of thing that probably happened in Camarthen.

“We shall do it with magic,” said Arawn, his eyes flashing. “It will be quite painless. We will change lives with each other and you will fight Hafgan. And just to make sure that the disguise is perfect, you will live for a year at my castle. If my friends and family don’t realise the swap then we’ll know that Hafgan won’t either. He’s not very bright at all.”

“Then let it be done,” said Pwyll.

Arawn looked at the prince.

“Before you fight Hafgan, there is one thing about him that you must know,” he said. “He is a fearsome warrior but to kill him you must only strike him once.”

The king waved his hand in front of this face.

“It’s an Otherworld kind of thing,” he said. “You know rules and regulations and whatnot. If you hit him with two blows then he will recover. So you need to make sure your first attack counts.”

He held out his hand.

Pwyll took his hand and shook it.

And so it was, that as soon as the deal was struck, the magic took its course and Pwyll looked like Arawn and Arawn looked like Pwyll. Then, each went back to the other’s kingdom and lived there for a year. Pwyll was astounded and delighted by what he found when he reached Annwn. The food was more delicious than any he had ever had before, everyone danced and laughed all day and night, and actually, once you got to know them, the dead weren’t so bad, after all. Throughout the next year, no one suspected that Arawn, King of Annwn was, in fact, Pwyll, Prince of Dyfed.

Then, on the appointed evening, exactly one year since Pwyll had met Arawn in the forest, the Prince of Dyfed made his way to the river to fulfil his promise. When he arrived, he saw Hafgan waiting in armour of gold and holding a huge silver shield that shone and sparkled in the moonlight. Around him, noblemen stood and watched Pwyll as he approached. Then, a knight stood forward and spoke.

“This is a fight between two kings and two kings only,” he said, addressing all those who gathered. “Each is making a claim to land and territory. All others must stand aside and leave the fighting to the two of them.”

With that Pwyll, who looked like Arawn, and Hafgan, who looked like his head had been shoved down a toilet, began the fight. Knowing that he must only strike one blow, Pwyll waited and waited, ducking and dodging the attacks of Hafgan. Then, with a speed and strength he did not know he had, Pwyll thrust his sword at Hafgan’s silver shield, which split in half with a deafening crack. Hafgan’s armour shattered into a thousand tiny shards and Pwyll’s single blow threw him back off his horse, crashing onto the ground. Hafgan lay and begged Pwyll to attack him again but Pwyll knew he could not and threw down his sword. Hafgan never stood again and died next to the moonlit river. And, as the last breath left his body, the noblemen all fell to their knees at the feet of Pwyll.

The next morning, Pwyll and Arawn met for the first time in a year.

“Hafgan is dead,” said Pwyll. “And you are the one true king of Annwn.”

And Arawn and Pwyll became great friends and spent many happy days riding together. And from that day forward, Pwyll was known not as the Prince of Dyfed but as Prince of the Otherworld.

Is just one signature not enough? Get your hands on a first-edition hardback with an exclusive bookplate featuring an illustration from the book, signed by as many of the 11 contributors as possible. Plus the ebook and your name in the back. 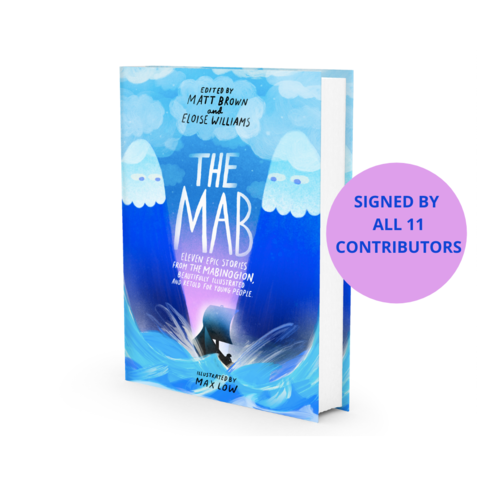 An exclusive, The Mab tote bag and everything at the Signed Mab level. 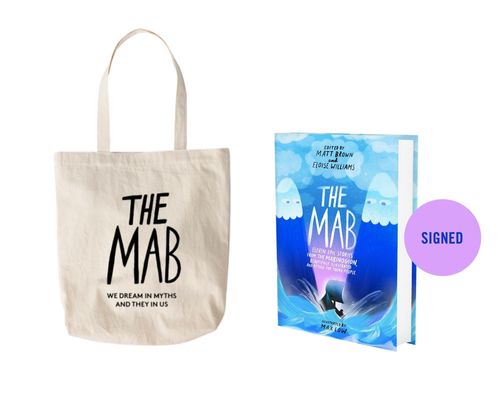