Of all the books currently funding with Unbound, Lulu Allison's Salt Lick jumped out as one I desperately wanted to read. The book follows Jesse and Isolde, a boy and a woman, linked across time and the feral fields of wild England at a time when most food production has moved abroad. As Lulu points out, it isn't dystopian, but it's further along the 'wrong road'. Here she and I discuss the islandification of Britain, cities versus countryside, and returning to nature.

"England with no farms” is a striking way to begin your Salt Lick pledge video. Where did this concept come from? Is it an idea you’ve had in your mind for a while?

Yes, for ages. I’ve always longed to go back to the countryside of England before cars were invented, before we were such a scything presence in the land. One of my favourite songs is 'Peace in the Valley Once Again' by American country duo The Handsome Family. It’s about nature reclaiming a shopping mall. It’s full of beautiful imagery that I find really comforting - the mirrors cracked in half when wild horses galloped past. though I am mostly a people lover and an optimist, don’t think we have managed to be our best selves in this shot at existing, and I am sad for the damage we’ve caused. It’s a shame that our glorious side isn’t the one that has triumphed, but it is comforting to think of nature being ok without us.

In Salt Lick one of the reasons farming has declined is because food production is done more cheaply overseas. This reminds me of those supermarket adverts assuring customers their products are made in Britain. Which seems a bit nationalistic. To what extent has the rise of nationalism across the world influenced Salt Lick?

Very much so. The decline in the rural economy is a by-product of choices made by a capitalist, authoritarian government. The further islandification of Britain, then England as the Union breaks apart is in part simply an extrapolation from where we currently are. The state infantilises people as part of its power grab, creating and propagating nationalism to facilitate its own ability to control. But in the end, it is control rather than ideology that sets the agenda. There is a ruthlessness I see in some current politicians that isn’t driven by a nationalist fervour (though for sure some of them are) but like fascists, they use the easily herded nationalistic tendencies of some of the population as a weapon to maintain power. In the end, I think fascism (which I do see as a rising threat) is about the exertion and absolute control of power - so much so that even the nationalism that may spawn it is only a useful tool. This is from the middle of the book.

Turmoil, as always, favours change. And opportunity. Well practiced in the parsing of opportunity, the state develops; an organ of resilience growing around the current incumbents. Democracy becomes a word that loses its meaning, however many times it is written, held over the heads of lop-sided conflict with the matt-black soldiers of state control. The imperfect but cherished system snaps and burns like the board the words are written on.

Some symbolist in government signs off the building of vast prisons at the cardinal points. For just enough of the populace, it makes them feel safe. New crossing points, new gates to keep the city secure. And with a billion ears and a billion eyes, the state learns the trick of what just enough is. Spends it out in just-enough shifts. Teams up with sportswear manufacturers, entertainment providers, game developers, taste makers, wellbeing advisers, healthy living enablers, security enforcers to ensure that just enough of the population are just happy enough. […] The state discovers a libertarian strand and the populace take to the ways of the libertine. Why think about the declining birth rates? The deaths we still all feel? The tightening of control? The snip snip snipping away of freedom? Let’s cavort, cabaret, and let’s toast the we that remain. The state, a wily schemer, learns quickly that certain freedoms can stand in for others. Sure, party, take drugs, get high, who are we to stop you? The concessions are offered with insincere man-of-the-world smiles. We share your appetites, who are we to judge? But slowly, quietly, stealthily, control is exerted. The internet is pruned. Soon it takes an espalier shape, dropping tight little fruits of a usefully uniform size and shape. The voices of those who notice, who rail, who warn, soon can only be heard on street corners. Those of the populace inclined to thinking a little about the state of the country come to in the months and years after the second pandemic with a hangover, to find everything, once more has changed.

One of your main characters is happy in the countryside and doesn’t want to move to London. Another leaves the city in search of answers. Do you think there’s an aspect of ‘coming home’ or ‘reconnecting’ when we go out into nature? It’s certainly something I’ve tried to explore in all of my books.

Yes, in a number of ways. The origins of the book came with the idea of a man in a prison cell, addled by the boredom of incarceration, by the tedium of a regime that no longer had any concerns with rehabilitation. This character imagines the interior of his body as though it is a terrain. He explores the structures he imagines under his skin as though it is a landscape. There is an overlap with dimly remembered scenes of his childhood, this too is a kind of homecoming, and longing.

The cow chorus speak in vain about our inability to be settled, to understand what place means. They are frustrated with the humans who are unable to reach contentment. They say:

You brilliantly say this of Salt Lick, ‘It isn’t dystopian, but it is further down the wrong road’. Can you explain that a bit, and also breakdown how far along that road you think we are now?

Sometimes I am scared by how far we have fallen. There are deportations for god’s sake. We are seeing a terrible collusion between on-the-hoof ideology of Johnson and Cummings fitting into the agenda of a capitalist, right wing media who, for their own reasons, enjoy a bit of foreigner scape-goating. It’s grim. I think that there are not more racists, but that recent events have allowed existing racists to feel that their views are not any longer taboo. It’s a terrible shame - at least if we can’t persuade people that racism is a failing, our collective failing, it should be kept locked inside the racists where it can only harm them. Salt Lick takes the casual power grabs of now, the sanctioned stirring of hatred we see in events like the Windrush and current deportation agenda a little further. Nothing, after all, seems to imply that the current regime feels they have reached a point at which they should rein themselves in.

Your countryside is home to secretive groups of both white nationalists and idealistic off-the grid groups. Could you see yourself living off-grid? What would be the attraction in that?

I absolutely can. I love the invention you see in places like allotments. People using their creative powers to build answers to problems with whatever materials they have available. When I was younger, my fantasy was to live in a house that didn’t need the state - water and power self-sufficiency. Though I’ve never imagined myself as a farmer. In Salt Lick, Isolde begins to learn to make rope as ‘road prices’ (the cost of anything manufactured and brought from the cities by pedlars) are very high. I am a maker myself and fairly good at DIY, and I love getting to know materials, so though I would probably get sick of no coffee, many other of the things I now take fore-granted, I also would love the chance to build things, to adapt, to problem solve. And I would love to live in a world with excellent trains and no cars. But there is always a darkness in the rural idyll. The countryside isn’t always the kind and gentle place of hippy potters and anciently wise growers. It’s as mixed as the cities.

Finally, a predictable question, but can you talk us through some literary or cinematic influences on Salt Lick?

The main influence was probably The Handsome Family song. As there is a chorus, I should probably say classical Greek literature, but that makes a much grander claim for my inclusion of a chorus than was actually the case! It’s hard to pin down cultural influences because one rarely marks them going in and by the time they come out again, they’ve all been joggled in together. 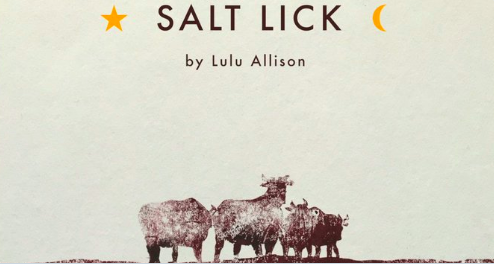