Jason Cobley's A Hundred Years To Arras tackles conflict head on. Specifically, through the lens of the First World War. As the synopsis reads it is a book about "one man's coming of age through land, love and blood." Set in Somerset and France, it's one of the most exciting projects currently funding with Unbound, and deserves your support. To find out more about the novel, I spoke to Jason about the Somme, his family history, and his side-hussle as a DJ extraordinaire.

A Hundred Years To Arras is a coming-of-age set in WW1. I imagine it was a ‘coming of age’ experience for all involved. What inspired you to write the book?

On the hundredth anniversary of the Somme, my father was talking to his elderly sister on the phone. The subject came up and she said, “Of course, you know that Auntie Lucy’s son was in World War One”. Being of a generation of a huge Welsh family that didn’t Talk About These Things, this was a huge revelation to all of us. It turned out that my great-grandmother’s sister’s son, Robert Gooding Henson, went to war at the age of 23 and fought at the Battle of Arras. I started to do some digging and found out a few details. This was going to be something I’d share with my Dad as a way of getting him interested in something. He was long retired but not well and lacking a lot of motivation. Then, suddenly, he died three days after I’d had back surgery. Dealing with my own recovery at the same time as sorting out everything that follows a parent’s death was challenging, to say the least. I used my time convalescing following the funeral productively by tracing our family tree. I traced the Cobleys and the Hensons back to the 18th century, and a story began to reveal itself. Both strands of family were connected to Somerset, a particular farm, and the trenches of France. On the hundredth anniversary of the Battle of Arras, I went with my wife and daughter to visit the area, and I found that I felt not only an emotional connection but a physical one. A story was born. I decided to fictionalise Robert’s story and intertwine it with aspects of family history and the amazing story of what happened in Arras itself in 1917. So, yes, the book is a coming-of-age story for Robert and also, at the ripe old age of 48, a coming-of-age story for me.

What films and books do you think have really nailed the experience of WW1, as far as those of us who didn’t live through it now understand it?

I think one of the reasons I wanted to write this book is that so few of them have nailed it. Most young Tommies lived their lives on the front line endlessly waiting for something to happen, freezing to death, shooting rats for target practice, keeping captured animals as pets, even trying to cultivate small gardens in the trench walls. When the fighting did come, it was so horrific but also so disorganised that it’s little wonder that so many died. For me, there were a few touchstones. It’s a cliché, but the TV series Blackadder Goes Forth captured effectively the mundanity of trench life, itself in turn very much influenced by RC Sheriff’s play Journey’s End, which encapsulated well the black comedy mixed in with the trauma of boys having to fight as men. Sebastian Faulks’ Birdsong is a stylistic touchstone for me, but it was very much from an officer’s point of view. Few works of fiction have captured the experience from the point of view of the working-class Tommy. In those days, so many people worked on the land that most young privates were farmer’s boys like Robert. I wanted to portray the experience of those kinds of men from their point of view, along with all the action that you might expect from a war story. I did a fair bit of research, and by far the best non-fiction book that helped me was ‘Where Poppies Blow: The British Soldier, Nature, The Great War’ by John Lewis-Stempel. More recently, ‘1917’ captured the action viscerally, and I hope that’s something I’ve managed to do on the page.

The book is based on a real-life infantry regiment from Somerset. Can you explain this choice and your connection to them, if any?

Robert Gooding Henson signed up, we think, in late 1915, maybe early 1916, and was assigned to the Somerset Light Infantry. At the time of the events of the book, census records show him and his family living at Blindwell Farm in Somerset and he probably signed up at Taunton. The Somerset Light Infantry had a big role to play in the Battle of Arras but they weren’t the driving force, very much caught up in events over which they had no control. A really interesting coincidence, that I only discovered much later, was that my father, his siblings and parents lived at Blindwell Farm for a time in the 1950s. There was a family connection to the place that I didn’t really appreciate until I came to write the book, so the theme of our spiritual connection to places is something that I try to explore.

You also run a radio show, and are offering a personalised playlist as a reward pledge. How did you find time to write a book while hosting a show?!

You flatter me! My day job is a teacher and it’s very demanding and emotionally draining sometimes, so I use the radio show as a creative outlet in the middle of the week. I volunteer at a community radio station on Kenilworth. I turn up at the studio once a week, do a few hours, and go home. I love it. I get to choose the music myself, talk about whatever I want (within reason) and have fun. So, I thought, why not give backers the chance to pick a playlist? Any ten songs of your choice, and you could even appear as a guest on the show. Kenilworth Books, one of the best independent bookshops in the country, have pledged this one. It’ll be great fun when we do it! So, the writing of the book was mostly done really before I took on the radio show. I’m working on a redraft, of course. I’m always writing something!

Yet another string to your bow is that you write scripts for Commando comics! Tell us more about this, and how you keep a long-running series like that fresh?

I’ve always written comics. I started off self-publishing them twenty-odd years ago, and eventually this led to some professional work in comics. Whilst I was researching the Battle of Arras, the opportunity came up to pitch ideas to DC Thompson, the publishers of Commando. I came up with ‘The Tunnels of Arras’, they liked it, and I got signed up as a semi-regular writer. My latest, set at Stalingrad in WWII and featuring Russian and German soldiers being stalked by a pack of wolves, comes out on 20th February 2020 – available in all the best branches of WH Smith. They publish 4 new self-contained stories per month with a rotating team of writers, of which I’m just one. It is hard to come up with new ideas – I’ve had a couple rejected because they were too close to something already in the pipeline – but I’ve found the best way is to come up with a small story set against a big backdrop. Characters are always just as important as the plot. It’s also important to try and find things that haven’t been covered before. I did one called ‘The June Winter’, about The Falklands Conflict, and I’m currently writing one set during the Coventry Blitz in 1940 involving volunteer firemen.

What’s next for you?

Firstly, I need to finish my redraft of A Hundred Years to Arras so I have it ready for the next redraft once the book is funded. Most of my creative focus is on getting the book funded so that it’ll be published by Unbound. I’m nearly 52 now, so it feels like this is a major turning point for me. It’s such a personal story but also so hugely universal that I do feel that it could have wide appeal – we just need to get it out there. I’ve had such good responses at readings and from people who have read excerpts that I can’t let this one not get on the nation’s bookshelves!

I do already have my next novel planned out, however. It’s going to be partly based on my own experiences both as a teacher and dealing with anxiety and depression but with a magical realism twist. I don’t want to give too much away as I’m pretty excited about the concept, but it’ll be the same mix of drama, comedy, action and literary introspection as A Hundred Years to Arras. 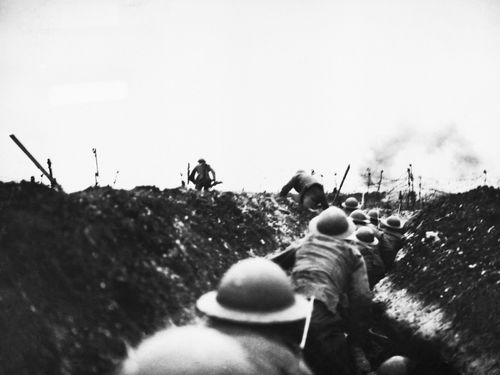