My series of interviews with interesting Unbound authors about their interesting books continues with James Wilkins, Creative Director at Joe.co.uk discussing DARK, an easily digestible guide to the Universe in a handy A-Z format. Illustrated by Andreas Brooks, DARK aims to shed light onto some of science's biggest questions.

"Despite not pursuing physics beyond GCSE, his love for all things space and graphic design has led to him spending too many evenings trying to comprehend time-dilation. Oh, the irony," James' author profile reads. Let's find out more.

Dark is a beautifully-designed book offering digestible chunks on everything from the Big Bang to gravity. But it’s also more than that. Talk us through it.

Thank you very much! Making sure that the book was nothing short of beautiful was essential. When confronted with mind-bending cosmological concepts, one can often be left with strange, wonderful and quite often abstract visualisations of what these things may look like. This is why the artwork that companies each chapter are not literal representations of the subject matter – they are there to provoke a reaction and evoke emotions associated with a subject matter.

Something Andreas and I have aimed for is for each piece of artwork to not only work as an accompaniment to the subject text but could easily stand alone as a piece of artwork in itself… which is why some of the pledge levels allow people to pledge for individual prints. As the book contains easily-digestible subject texts, bespoke artwork for each subject and double-page spread space quotes, you can easily dip in and out. The book follows an A to Z format so there’s 26 subjects, 26 pieces of art, a bespoke ‘space’ font for the alphabet letter pages and then double page ‘space quotes’ throughout.

It’s a great time for popular science books. Which others inspire you?

I would highly recommend Carlo Rovelli’s 7 Brief Lessons On Physics and Neil DeGrasse Tyson’s Astrophysics For People In A Hurry. A Brief History Of Time by Stephen Hawkins is also wonderful – I read it 20 years ago and didn’t understand a word of it then tried again a few years back and at least 5% of it had started to make sense… so that’s progress, right? I’m also a huge cinema fan so I also loved Kip Thorne’s ‘The Science Of Interstellar’ which broke down how Kip Thorne advised on Christopher Nolan’s film, how it was grounded substantially in physics and where they bent the rules for cinematic effect.

What inspires you most about space?

Space, the great expanse that encapsulates us, holds so many secrets… some that we have discovered, some that we’ve begun to know and some that we may never know. Space represents both the human species’ incredible intellectual feats unpicking, best we can, the fabric of existence but it also humbles us and reminds us that we are but a spec drifting through the abyss.

I find it interesting that the general public aren’t constantly screaming in the streets “Oh my f***ing god, we are hurtling through space on a floating rock at 60,000 miles an hour! Aaaaaaaaaargggghhh,” When it comes to space, you don’t have to go very far to find something that should do a great job of melting your brain.

Right some facts that you may not know…

There’s a thing called Dark Energy that accounts for 70% of the Universe’s mass but we don’t what it is. What we do know though is that it’s making the Universe expand incredibly quickly.

It’s an irrefutable fact that time runs differently depending on where you are. If you were to take a one-way trip into a black hole and take a look outwards, time would slow down to such a huge extent that you’d potentially see the rest of the Universe age before your very eyes.

When two black holes collide, the impact is so catastrophic that it cause ripples in the very fabric of space-time that are undulate through the Universe. These are known as gravitational waves and while they were only discovered in the last few years at LIGO, they were predicted over 100 years ago by Einstein.

One of your pledge packages involves an observatory visit. What can we expect from that?

I suppose that’s the most unusual of the pledges! Basically, whoever pledges for that level will head out with Andreas and I for a quick trip to the Hampstead Observatory (or if it’s too cloudy, another space themed London institution!) and then head out afterwards to the very best place to ponder the Universe… the pub! We’ll chat about the meaning of the Universe, the fermi-paradox, the core-principles of graphic design. And Netflix.

The universe is ever-expanding. Is your curiosity about the solar system doing the same? What don’t you know about space that you wish you did?

What’s next for you? 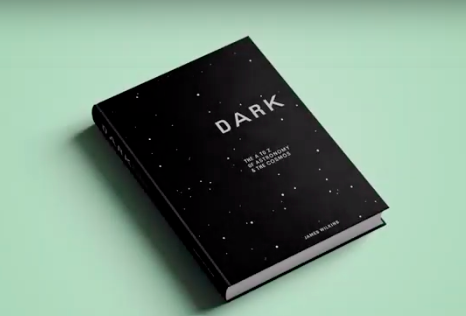