Archaeology can be a dirty business

RAVE review of The Lifers' Club

I've been subscribing to the popular magazine Current Archaeology since it first appeared, in March 1967. That was the year of the Beatles' Sgt. Pepper's Lonely Hearts Club Band album. It was also the year I graduated from university and got a job in Truman's Brewery, Brick Lane, London. But I still subscribed to Current Archaeology, so my interest in the subject hadn't died merely because I was physically employed elsewhere. Over the years my books have had many reviews in CA, mostly favourable I should say, but none (or should that be NONE?) as good as this one. It's an absolute cracker! 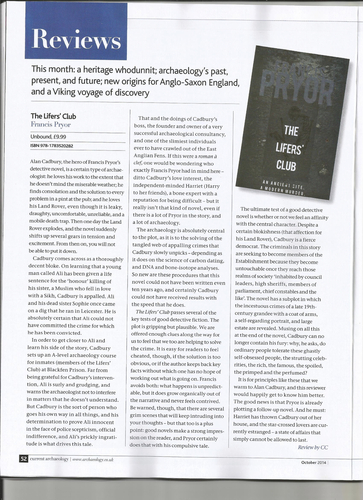 While on the subject of reviews, I would be very grateful indeed if people who enjoyed The Lifers' Club could score it ( out of five ) and post a short review on Amazon . If you didn't like it, kindly keep your thoughts to yourself!