Archaeology can be a dirty business 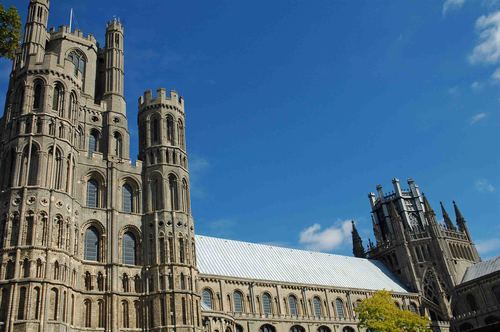 What could be more gorgeous than Ely Cathedral in all its stunning Norman majesty? But this fabulous building, known to Fenmen as The Ship of the Fens, has recently been revealed to have concealed some dark secrets, both in the days of its founder, St Etheldreda, and today, in the 21st Century. My second book featuring the archaeologist and amateur sleuth Alan Cadbury, The Way, The Truth and The Dead, takes places in the little hamlet of Fursby, within clear sight of the great Cathedral. It's a story which involves a complex excavation, which is broadcast live to the nation on terrestrial television, at peak viewing times. The two series of programmes attract millions of viewers, not to mention the unwelcome attentions of the sort of people who love success and power. And as Alan slowly discovers, it was the same in the past as it is today. It's a book about Truth, the half-truths and the lies which that mis-used word so often conceals. Is also a book about human relationships and how they fare when subject to the harsh, unforgiving scrutiny of the modern media.

Our hero, Alan Cadbury was bruised by his adventures in The Lifers' Club. His personal life suffered badly and his confidence was shattered. So how do he and his relationships fare, when faced with the new challenges? I thought I knew the answer to that question, when I started work on the book, but as so often happens, the characters started writing themselves, and Alan's reactions took me completely by surprise. One particular person, who I had expected to be wicked, actually turned out to be quite pleasant. But books are like that. The words, the pages, the chapters creep up on you - like the silence of night or the soft, dark, yielding peats that surround the magnificent Cathedral city of Ely. Those peats are surpremely fertile, but they also conceal and preserve a wealth of evil.

Pledge for the new Alan Cadbury book, The Way, The Truth and The Dead, here

I thoroughly enjoyed the first book and I'd been hoping there might be more. This is terrific news.