A crime thriller, an existential mystery, a love story 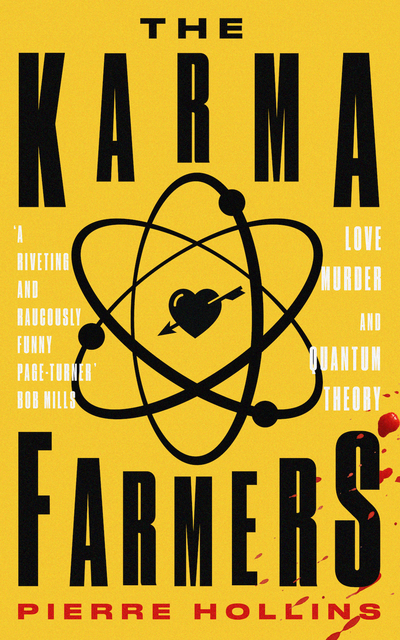 Crime | Fiction
You made The Karma Farmers a reality. It's available in all good book stores now.
$8
73 pledges

Above his desk is a quotation from William Blake: I must create my own system or be enslaved by another man’s.

And to this end, Bradley Holmeson, a thirty something bookshop manager, has self-published a revolutionary manifesto and hidden copies on the shelves of local bookshops. He’s not looking for revolution so much as notoriety, believing literary success might be enough to win back the affections of his estranged girlfriend.

Of course, all armchair revolutionaries have a theory that promises to change the world; but Brad’s manifesto is based on an unsung scientific paradigm: a lost holy grail of scientific theory written in the 1950s by a theoretical physicist, the late David Bohm.

Armed with his radical exposé of Bohm’s work, Brad believes he’s on the verge of a stunning literary adventure. But his seditious manifesto begins to attract the wrong attention… A pair of occult-book collectors are keen to promote his revolutionary ideas. They propose to put him in touch with a retired Special Agent; a former shadow of the Marxist Bohm – but when the agent is killed, Brad’s dream of literary success turn into a murder investigation.

Compounding his problems are the reluctant girlfriend, a retired detective intent on revenge, and an American Homeland Security official ready to compromise the truth in his search for promotion.

Salvation arrives in the unlikely form of the contract killer Finnigan; a cold-blooded mercenary unhinged by memories the man he’s assassinated. Thrown together by circumstance, and pursued by the law, Brad the Hipster and Finnigan the Merciless must resolve their differences to uncover the reason for the agent’s death.

This novel is a quest for the Holy Grail of science, should it exist.

It’s an adventure in which this everyday armchair revolutionary becomes embroiled in occult murder; where he meets the violent, the obsessed and the dangerously misguided, armed only with his defensive sarcasm…

And all to win back the affection of the woman he loves.

*For the completists: Brad’s self-published manifesto, Death and Physics, the object that began this rebellious escapade is included at the end of the novel, describing the scientific rationale that allows the story to play out.