A novel that takes the premise of ANIMAL FARM and applies it to the life of Margaret Thatcher. 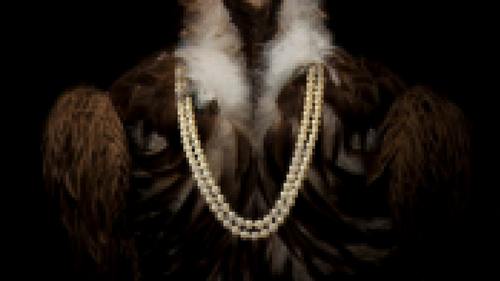 Seeing as Christmas is approaching, I thought it might be a good moment for a stocking filler – a sneak preview of the digital bird. An unusual gift? Perhaps. But I guess the specimen makes a change from turkey...

What is this digital bird, then? Well, when The Iron Bird is published on 7 February (note: new publication date) everyone who pledged £10 or more will receive a copy of the ebook. Of course, some of you will also get paperbacks – it depends on the level of your pledge. Exciting news: I've just received the final proofs of the print edition and it's looking great, but perhaps in this case it's the ebook that has the edge, because it contains a series of links allowing readers to explore the allegorical interpretation of the novel.

Now, some of these lead to secret pages hidden deep in the coding of a new website that I'll be launching in January, some reach out across the Internet and attempt to curate its content, and some link to video.

Time for that sneak preview I promised, then. First of all, some context...

In a scene in the novel set in 2010, Baroness Thatcher is under the delusion that Cameron is about to offer her a role in his Cabinet – a chance to finish the 'great work' she started back in the 1980s. "Yes, that's right, dear," she says, struggling to suppress her excitement, "The Mummy Returns."

Perhaps that was more suitable for Hallowe'en than Christmas, but even so... A taste of what to expect when the book is published in February. Oh, and remember... if you're looking for a last minute gift, the digital edition The Iron Bird is available to preorder here.

Finally, something to send a shiver down the spine of everyone's festive mood: a chilling insight into Christmas at Chequers with the Thatchers, courtesy of Lord Bell, who writes in his memoirs...

There were absolutely no presents - presents were not part of Christmas as far as Margaret was concerned. No Christmas jumpers. No open-necked shirts. No charades. No games.

If that doesn’t sound unpleasant enough, he explains that the day was centred around the Queen’s speech – which of course, required total silence:

You couldn’t speak, you couldn’t cough. You couldn’t move. You had to get yourself into a reasonably comfortable position because if you shifted once it had started she’d give you a killer death stare.

She would never actually criticise the Queen, but she would usually make a sarcastic comment at the end – 'Oh dear, she’s going to feel sorry for the poor again.'

I wonder what Christmas at Chequers will be like this year. Oh, well. Whatever you're doing, I hope you have a better time than Lord Bell.

Explore the allegorical interpretation of THE IRON BIRD through the series of links in this special e-book edition.
Buy now
£20  + shipping
31 pledges

First edition paperback and special e-book edition. Plus your name in the list of Patrons in the back of the book.