Invitation to a talk at The Little House, Lavenham

The event at the Fitzwilliam Museum, Cambridge, on Gayer-Anderson's exceptional life and collection went so well that we're doing another, with new material, at his former home, The Little Hall in Lavenham, Suffolk, on Saturday 13th June - you're all invited! Details to follow.

In 1924, Pum bought and began the restoration of the fifteenth-century timber Great House, the adjoining Little Hall and six tenement cottages in the market place of Lavenham: ‘a lovely and still unspoilt example of a medieval village of about 1,000 inhabitants’. The building stand on the east side of the square, ‘its steep tiled roof extending in a protective way over the roof of the adjoining cottage like the arm of a big boy thrown over the shoulder of a smaller pal’.

Pum had wanted to create a ‘happy house … haunted by Love’, where he could house some of his collection, entertain friends and construct some sort of domestic life. He moved Evelyn Wynn, their baby son John and her two older children into their new home and visited them on annual leave from his Cairo life. The much desired idyll didn’t last and is described in Evelyn’s diaries and her roman à clef, ‘Love Is Not Love’*, in which she faithfully details her arrangement with Pum, its traumatic collapse and the misery that followed. It is a story of idealism, free love, betrayal, sexual double standards and a very bitter custody battle fought out in the 1930s. She had hoped to come to love Pum as she got to know him, despite the trials of having an illegitimate child and ‘living in sin’ in the 1920s: ‘he was a man whom I would like for the father of my child … I knew that one day I should love him’. And she says she did, at first, even though he had told her from the beginning not to expect too much given that the ‘idea of marriage with any woman was intolerable to him’.

While it lasted, the Lavenham life was filled with daily tasks, the children, and a constant succession of visitors including the artists Edna Clarke Hall, Dod Proctor, Glyn Philpot, Vivian Forbes, and Eric Gill. Humphrey and Stephen Spender bought the Great House in the early 1930s, after Evelyn had left, and Pum and his twin brother Tom moved into The Little Hall.

* 'Love is not love/Which alters when it alteration finds', Shakespeare, Sonnet 116 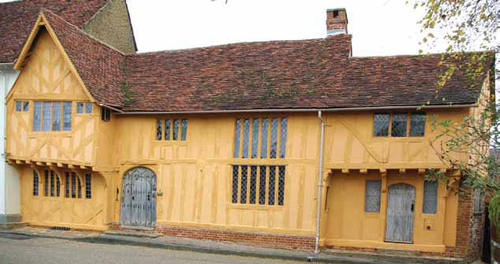