First sight of the Gayer-Anderson Cat

Pum's greatest and most adored find, by far the most spectacular of his collecting career, was the acquisition of what is now known as the Gayer-Anderson Cat. One breakfast-time in October 1934, a villainous-looking ‘old friend’ of the tougher sort from Bakkara, salaamed his way into Pum’s Cairo flat and, with a great flourish of drama and mystery, produced a bundle wrapped in cloth. Instead of the assured smile the dealer usually wore for such occasions, he had a serious if shifty air of apprehension about him. Accepting and lighting a cigarette, he asked that the servants be sent out so that Pum and he could be alone, then, squatting on a low stool, he slowly and deliberately untied his bundle. Taking out a number of objects done up in newspaper and dirty clouts, he handed them reverently to Pum, one at a time: dilapidated bits and pieces, wooden and friable mummified fragments of cats, none of any real interest or value. Neither of the men spoke and it became obvious to Pum that his visitor was building up dramatic tension, a familiar technique.

There was a long pause. The unwrapping ceased. ‘Is that all?’, Pum was eventually constrained to say, and thus gave the man his cue. Without answering he fumbled amongst the cloths and brought out another object of some size and considerable weight. He continued to carefully unwrap it and, at last, with a skillful turn of hand, he held up to him the life-size bronze statue of a cat.

Excitement robbed Pum of breath. It was no khazook [fake] but a very rare, intensely beautiful and valuable object that must once have adorned a shrine of Basht, the cat-headed goddess who symbolizes the rays of the sun. This was the first life-sized bronze cat Pum had ever seen. Keeping outwardly calm he examined the extraordinary object. It was covered with a heavy coating of crystalline verdigris and crisp flakes of red patina, hiding much detail and subtlety of modelling. His wily dealer-friend, though, sensed his excitement and pleasure and proceeded to give an over-dramatised account of its finding, saying he had stumbled across it quite by chance on the site of the ancient Memphis near Saqqara, where he lived. It had been lying on a wooden block shaped as the Basht sign on which it had once stood. After lengthy and tense bargaining, Pum bought the lot for a hundred Egyptian pounds [equivalent to nearly a hundred pounds sterling], a ridiculously small price, but much to the dealer’s relief for he knew the police already had their eye on him...

The Gayer-Andesron Cat is now in the British Museum 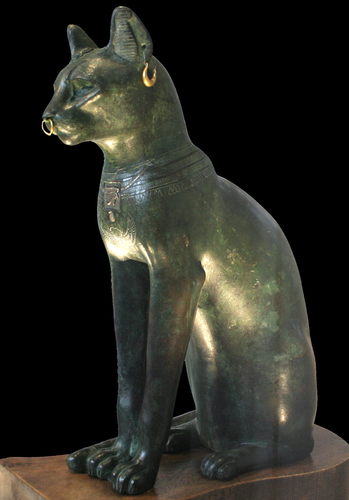