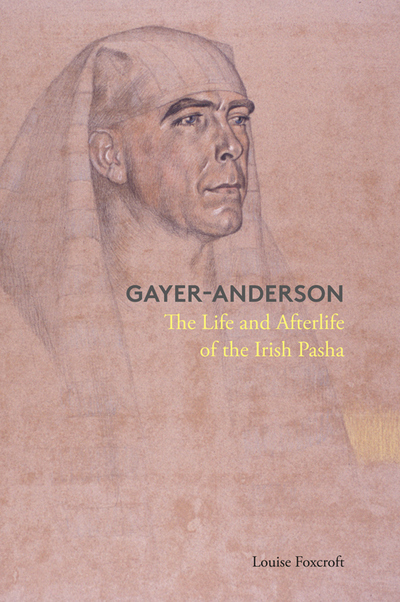 Based on the journals of RG ‘Pum’ Gayer-Anderson, this historical biography tells of a riotous double life as the British Empire began to collapse. Candid and charming, the story is interspersed with the sordid and violent, and was conceived as a ‘gauge of self-knowledge’.

Pum was an Egyptologist, poet, surgeon, soldier, psychic, noted collector and tomb-robber. As a child in the 1880s he crossed an unforgiving America with his entrepreneurial and eccentric Irish parents. As a man he adopted Arab life and immersed himself in it as colonials seldom did; he saw ghosts and witches, sailed the Nile, wrestled Turks and crocodiles, fought at Gallipoli, smoked opium, performed surgery in the desert, gathered and cared for artefacts and boys in his Cairene home, survived an assassination attempt and, in the name of science and Henry Wellcome, in flowery glades he boiled the flesh from the skulls of Nubian warriors. His journals are filled with frank accounts of his exploits and of the illustrious and colourful people who wandered by: Lawrence of Arabia, Gordon, Kitchener, Conan-Doyle, Eric Gill, and Humphrey and Stephen Spender, among others.

His was a strange and eclectic life, one which teetered over the constraints and excesses of early twentieth-century expectations. It was a tightrope walk of nerve and courage: he had to keep a clear head, a fierce control, and focus carefully on what he wanted. Drugs, race, class, family, sex and selfhood are vividly mixed in a tale of two wars, colonial life, medicine, anthropology and psychic phenomena. The stiff-upper-lipped ritual of a very ‘British’ upbringing vied with his Romantic and consuming love of beauty, his going native and his truly terrible poetry.

As a British Official in Cairo, Pum needed to keep up a respectable front knowing all the while how dangerous his true inclinations and desires were. Pum cherished the ‘peach-cheeks’ of young girl-boys, and his poems and curious drawings of them are held in the Bodleian Library, Oxford, as reserved material. In order to live the life he wanted he was forced to deceive and manipulate others – including the tragic woman who bore him a son, ‘by arrangement’.

As an identical twin, Pum felt as though he really was split in two. His private contradictions mirrored the dissonance between East and West and the fractured times he lived through.